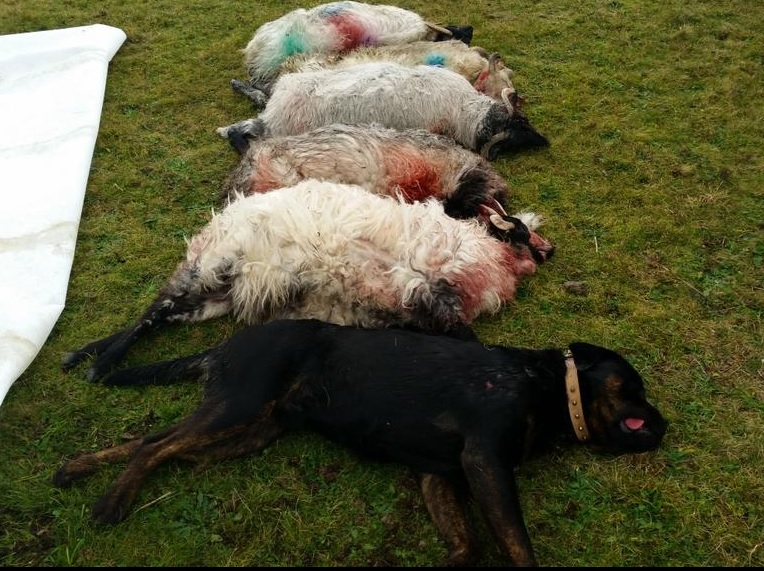 The result of a recent dog attack on sheep in Galway.

The latest series of savage dog attacks on sheep flocks in Wexford, Galway and Laois are an all too common reminder of the extent of this severe problem across the country, according to IFA National Sheep Chairman John Lynskey.

The IFA sheep farmers leader said farmers have a right to protect their flock and the law states;

(a) the dog was shot when it was worrying, or was about to worry, livestock and that there were no other reasonable means of ending or preventing the worrying; or

(b) (i) the dog was a stray dog which was in the vicinity of a place where livestock had been injured or killed, and (ii) the defendant reasonably believed that the dog had been involved in the injury or killing, and (iii) there were no practicable means of seizing the dog or ascertaining to whom it belonged; and

(c) he was the person in charge of the livestock; and,

(d) he notified within 48 hours the member in charge at the nearest Garda Station to the place where the dog was shot of the incident.

“In the last week, I had to deal with a farmer who endured a dog attacks on his sheep, involving serious losses with a number of dead and injured sheep, and is now facing into more losses at lambing. Despite the efforts of the farmer in defending his flock, some of the dogs still remain on the loose”.

Lynskey said the devastation and trauma experienced by this farmer has left him seriously questioning his future in sheep production. The latest is the third attack in the last 12 months.

“Unfortunately, I am taking calls on a frequent basis from sheep farmers around the country who have suffered similar such attacks. There are far too many dog owners not taking the responsibility that goes with owning a pet. Dog owners have an obligation to have their dog under control at all times.”

John Lynskey said we are now entering the season where dog attacks become a weekly feature again with the long dark nights. “Sheep flocks with pregnant ewes are particularly vulnerable to dog attacks at this critical time, and especially during the night.”

Over the four to five months into next spring, Ireland’s 30,000 sheep farmers will lamb down over 2.5 million ewes across the country.

Lynskey said last year IFA launched a protocol to help farmers who encounter a dog attack on their sheep flock. The IFA protocol involves an easy-to- follow, 10-point Plan of Action covering what a farmer should do following a dog attack or sheep kill.

“Based on the feedback IFA gets from farmers who have had to deal with a dog attack on their flock, one of the biggest problems is the lack of information on what they should do, who they should contact and where can they get help”.

The IFA Protocol deals with these basic questions and also outlines important aspects of the law and how the dog warden service and the Garda can help. It also sets out how to keep a full record of the attack, which can be used as evidence at a later stage.