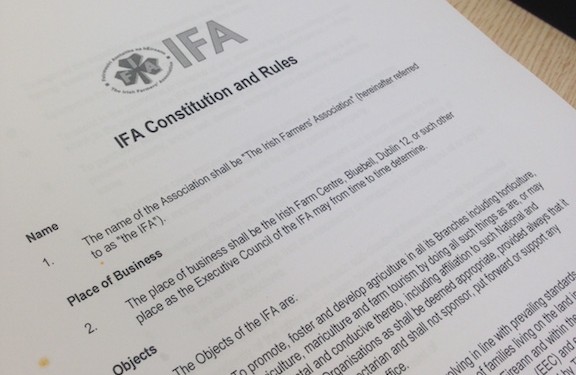 Strokestown IFA has confirmed to IFA HQ that the meeting tonight (March 29) of the branch to vote for an IFA President and Deputy President, will not be going ahead.

Regional Development Officer for Leitrim, Longford, Roscommon and Sligo, Adrian Leddy said that Strokestown is putting off the vote until there’s further developments on the Connacht Regional position.

Leddy said that the branch will have to vote in the election before the deadline for voting is up on April 14.

As it stands, no Connacht candidate has met the criteria for the position and it seems no one is willing to pull out of the race and give their county signature to another.

“The executive felt that the Connacht Chair position wasn’t being taken seriously.

“We put forward a resolution to Rule 75(B) to National Council earlier this month that the rule should be changed so that a farmer working outside the farm gate should be allowed to hold a regional chair position, but not for the positions of President and Deputy President.

“All I asked of IFA was to show leadership. We expected the resolution to get proper hearing at Executive Council, not at 8.30 in the evening when most of the council members were gone.”

The real truth of it is that our leadership at the minute is afraid to take on this challenge.

O’Beirne said that the perception at the minute is that 98% of the farmers on the IFA’s National Council don’t want a part-time farmer sitting there.

Speaking about the current IFA leadership, he said that they will let the new President deal with it [the issue of part-time farmers sitting on the Executive Council].

“The IFA at the moment is a ship sailing without a captain.”

As the Connacht stalemate continues, the last debate in the campaign to elect a new President of the IFA takes place tonight in Co. Offaly.

The candidates have been on the road since February 8, when the first debate took place in North Tipperary. Since then the candidates have debated and dealt with questions from the floor at 27 venues across the country.

Voting begins tonight and will continue until April 14 and the count to elect a new President will take place on Tuesday, April 19.