Processors have been called upon to hold milk prices for the last month of 2017, due to the “relative stability in the market”.

The global dairy market has shown some strength at the start of 2018, according to the chairperson of the Irish Creamery Milk Suppliers Association’s (ICMSA’s) Gerald Quain.

He also expressed hopes that this trend could develop further as the year progresses.

Quain explained that the latest Global Dairy Trade (GDT) auction showed a positive return of 2.2%, after negative trends dominated the last quarter of 2017.

The GDT index itself was largely stable over the course of 2017, with its peak-to-trough ratio at it lowest level in over five years, he added.

While the GDT softened over the course of 2017, it is extremely encouraging to see that those kinds of huge swings did not occur.

“The ICMSA is looking for gradual improvement over the coming months, given the Fonterra forecast of 4% lower production in New Zealand for their milk season,” Quain said.

As well as this, he explained that European quotes also softened over the course of 2017 – but butter remains historically high, with no signs that demand for this product is wavering.

This is very encouraging as we face into 2018 and it is vital that all returns are maximised and returned directly to farmers on the ground.

“While powders remain weak, they have shown increases in the last week of the year and it would be helpful if powders could continue to increase in the coming months to match those returns of butter,” he added.

Quain expects that the relative stability in the market should convince dairy processors to start the year off on a positive note – by holding milk prices at current levels – and, above all, to spare no effort towards ensuring that this price remains strong running up to and during the peak milk production months.

Processors are set to announce their milk prices for December supplies in the coming days and weeks. 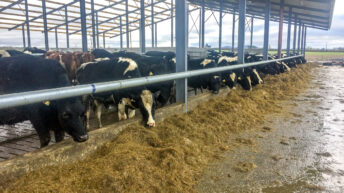