At this week’s Global Dairy Trade (GDT) auction, overall dairy prices slid 9.3% – adding in the fall from the July auctions overall prices have fallen a combined 23.8% since June.

Whole Milk Powder (WMP) prices have fallen over 30% over the period and when the current price of $1,590 is converted into an equivalent Irish milk price the value is now 10.85c/L – down from highs of 40c/L in January 2014. 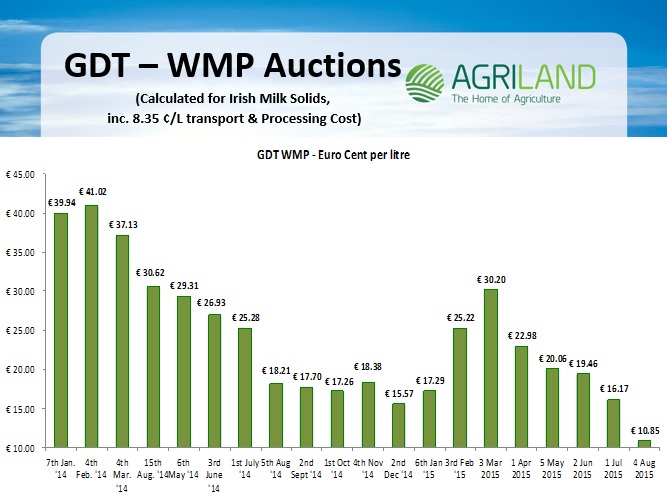 He said farmers cannot not be expected to take the full brunt of lower markets and the new era of volatility clearly requires a renewed focus by co-ops on their processing efficiencies and the actual value they add to the milk.

He said the IFA is urging the Minister for Agriculture Simon Coveney to build essential alliances with fellow Agriculture Council members in whose countries dairy farmers are equally under pressure, and impress upon the Commissioner the need to help farmers to manage through the current slump, and to speed up the recovery in the dairy sector.

The Commissioner must take action by agreeing to review intervention and make the €900m in superlevy fines paid by farmers available to assist the sector, he said.

ICMSA Deputy President, Pat McCormack, said that almost as worrying as the fall in dairy prices was the seeming indifference of both the Government and the European Commission.

Mr McCormack said that vast sums were now disappearing out of local economies as the ‘multiplier effect’ worked in reverse and the full scale of dairy farmer income falls became apparent.

“I’m not sure that our politicians and policymakers have grasped fully the devastating effect that this kind of milk price fall has on wider local economies. There’s this horrible complacent idea that this kind of income wipe-out is confined to dairy farmers and that the 35% fall is relative to last year when milk price was strong.

“What’s not being understood – certainly not by the Department or the Commission – is that we’re not in ‘income-loss’ territory anymore; we’re in income-disappearance’ territory.

“But even now, when the scale of the problem is right out there to be seen, we still have the Commission pretending that it’s some kind of temporary ‘blip’ that’ll be all over in a few weeks…or few months…or next year.

“The question is who’ll still be left producing milk by the time they realise that this is actually a make-or-break situation.”