Sheep farmers in Northern Ireland are over £1m worse off than their counterparts in the rest of the UK, according to the Ulster Farmers’ Union (UFU).

UFU Beef and Lamb Chairman Crosby Cleland has said that the differential between lamb prices in the North and in England, Scotland and Wales needs to be focussed on by processors and the the North’s Agriculture Minister, Michelle O’Neill.

The UFU said that at this stage in the lamb season most farmers are well aware that the weak euro is one of the main causes of problems in the sheep trade across the UK this year.

However, Cleland said that what is yet to be explained by any of the local processors is the difference in the prices farmers receive for lambs in Northern Ireland and the rest of the UK.

Since the beginning of May the price gap has on average been around 40p/kg which on a 21kg lamb equates to £8.40/head, the UFU said.

Advertisement
With over 120,000 lambs slaughtered in Northern Ireland since the beginning of May this has left sheep farmers over £1m worse off than their counterparts in the rest of the UK.

Since farmers in the North serve the same markets as their UK counterparts, and the lamb is produced to the same standard, this begs the question as to why farmers here are being forced to take less, Cleland said.

“While this is only a snap-shot of two months trade this year it’s about time our DARD Minister started asking serious questions of red meat processors in Northern Ireland as to why this has been happening at times of such difficulty for local producers,” he said.

The Northern beef price has also come under pressure again in the last few weeks and this is despite prices in England, Scotland and Wales holding up reasonably well, it said.

“This has undoubtedly made live exports to the rest of the UK more attractive for farmers with exports increasing by 80% from June to July.

“If local processors aren’t going to step up to the mark and keep prices in line with the rest of the UK, farmers must use other options available to them, such as the livestock markets or the live export trade to get a better price,” he said. 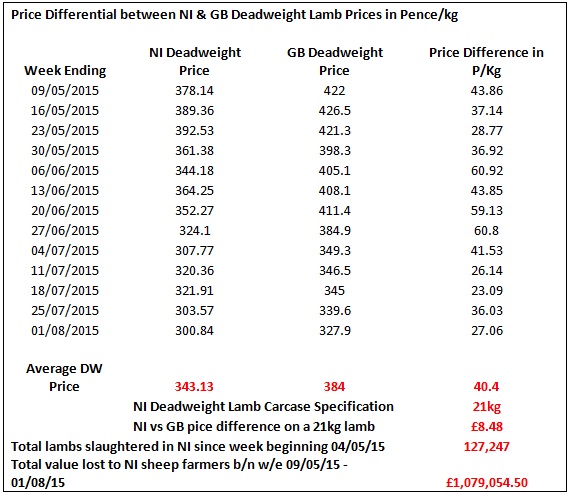 'The hay is ready' means something completely different in Mafia speak!