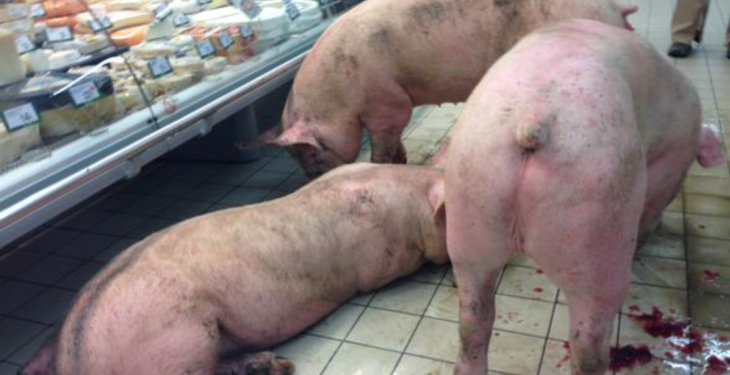 In the past few days, thousands of French farmers caused gridlock in northwestern France, in protest against the low prices they are receiving for their produce.

French consumers are eating less red meat while foreign competition in the beef, pork and lamb aisles is driving meat prices down, and French farmers are up in arms about it.

The French Minister for Agriculture, Stephane Le Foll, has said that there is an agricultural crisis and 23,000 French farmers are on the verge of bankruptcy.

What is interesting is the intensity of the protests and the reaction to them.

The French Minister for Agriculture reacted with an injection of €600m into the sector while supermarkets reacted too – by withdrawing non-French meat from their shelves.

The heavy-handed approach to protesting by French farmers – live pigs running around supermarkets; slurry dumped outside supermarket doors and pyres of tyres being set on fire – has had the desired effect.

French farmers don’t want foreign produce on supermarket shelves and the supermarkets are listening to them.

And why should French farmers be happy about ‘foreign’ Irish beef and lamb on their shelves when their own farmers are suffering?

Unfortunately, the ripples of the French protests are being directly felt by Irish processors and will, no doubt, be felt by Irish farmers in turn.

However, France is Ireland’s largest Eurozone market for beef, including live exports, and at €260m, accounts for 23% of Irish beef exports to Continental Europe (57,270t).

It is also our biggest export market for sheep meat with a value of €90m, which equates to 42% of our total global sheep meat exports.

Being heavily dependent on any one, or a small number of markets, can mean economies of scale when it comes to marketing, distribution and sales, but it can also mean severe issues when something does not go to plan.

We’re exporting most of our beef into the UK – a market that is seeing the Red Tractor label being pushed more and more and now our largest market for sheepmeat, France, is not welcoming us with open arms.

And it’s difficult to argue with the French. Irish shoppers and supermarkets are constantly being encouraged to buy and sell Irish produce. The National Dairy Council leads the charge with its ‘Farmed in the Republic of Ireland’ on dairy produce while country-of-origin labeling is required on all pre-packed meat.

One thing the French situation highlights is the need for increasing our export reach and reducing our dependence on a small set of markets.

Europe has an ageing population and the decline in French consumption of red meat has been well flagged in recent years.

A second trade mission to China is expected to happen before the end of the year where the Minister must ensure significant volumes of Irish beef exports start to move into the market.

Further, our exports to the US cannot remain as niche, but must be increased.

But, more importantly, the number of new and potentially significant markets must be explored and developed.