The pros and cons of dairy heifer contract rearing

Given the large potential expansion in the dairy herd over the next number of years, some dairy farmers are actively looking at contract heifer rearing as an option worth considering.

This is according to Kevin Fitzgerald of Teagasc who said it is a viable option for dairy farmers particularly in cases where farm profit can be improved by carrying more cows, or where land and labour are limiting constraints.

According to Fitzgerald, of primary concern to dairy farmers considering this option is ensuring the liveweight targets are achieved during the contract period.

However, despite it being an attractive option, there are risks presented by off-farm rearing of heifers, he said.

“For example animal disease “hotspots” may present a challenge, particularly at movement times. Also, for various reasons not all rearers will be able to achieve the growth targets required. It is recommended that animal weighing is conducted regularly to monitor progress over the rearing period.

He continued: “Finally, and perhaps most significantly there is a risk of conflict between the owner and rearer. This can be reduced somewhat by clearly defining the performance required and by completing and adhering to a written contract. A sample written contract is available from Teagasc.”

Teagasc estimate that the total economic cost of rearing a replacement to 24 months is €1,553 per head, incorporating a labour and land charge, and incorporating a cost for empty heifers.

It also estimates a daily cost of €1.18 per head over a 579 day period from the 1 May (in year of birth) to 1 December of the following year.

According to Fitzgerald, the average daily gain over this period must be in the order of 0.83kgs to achieve calving weight targets.

“Such a performance can only be achieved by the application of good management by the contract rearer,” he stressed.

He noted payment rates for contract rearing vary throughout the country and are often related to the specific agreement involved.

“For example some rearers incur costs of anthelminthic and heat detection costs, but may be paid at a higher rate. In general fees vary from the 90 cent to over €1 per heifer per day.

The Teagasc table below illustrates the key bodyweight targets for maiden heifers at key intervals. Breed influences are recognised within. 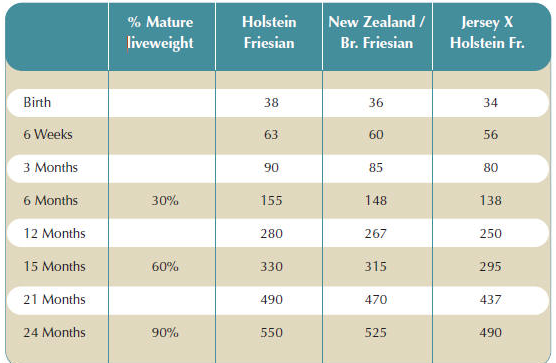 According to Fitzgerald, heifer rearing is a standard in countries such as New Zealand particularly and the industry has evolved there to the extent that over 70 per cent of heifers are reared off-farm with a written contract in place.

“Clarity in agreement in advance of taking in heifers is a key success factor for both parties, in addition to the maintenance of a good working relationship.

Teagasc has produces a document outlining guidelines for the contract rearing of heifers.

“Also copies of written contracts are available detailing the issues involved and how they may be addressed formally,” Fitzgerald added.

“Finally, anyone considering entering into such an agreement would be well advised to speak to someone who has engaged in this practice previously to determine common pitfalls and see how they may be avoided.”