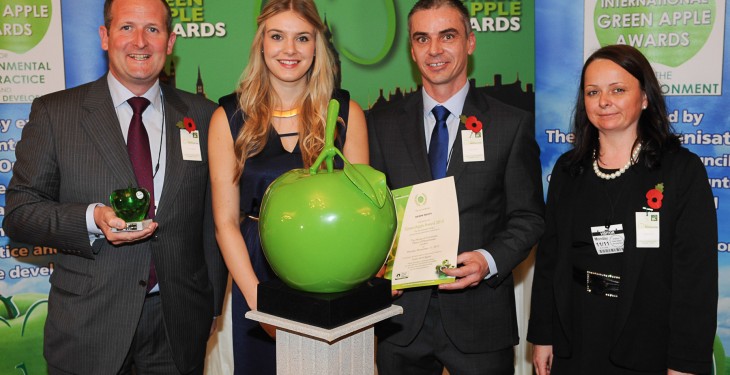 Dawn Meats has won a prestigious Green Apple Environment Award in the UK where it has operations in England, Scotland and Wales.

The awards are designed to find the greenest companies, councils and communities operating in Europe.

Dawn Meats competed against more than 500 other nominations to receive a Green Apple Environmental Award – the National Green Champion Ireland – at a glittering presentation ceremony in the House of Commons this week.  This is the highest honour awarded and there is only one awarded per country.

Key environmental deliverables by Dawn Meats in 2012 and 2013 included: reducing water intake by 56m litres across four sites; reduced thermal energy consumption of between 50 and 80 per cent across multiple sites; construction of a seven-acre wetland and eco park and 80 to 100 per cent post-consumer recycled content of packaging.

Headquartered in Grannagh, Waterford, Dawn Meats employs more than 2,700 staff and supplies a wide range of meat products to customers in over 40 countries worldwide.

Commenting Niall Browne, chief executive of Dawn Meats, said: “Sustainability delivers for the environment and for our bottom line as endorsements such as the Green Apple Awards are proving a major calling card with premium customers.  Dawn Meats sees sustainability and traceability as key differentiators for consumers and we have set ambitious sustainability targets for delivery by 2020, including: a 50 per cent reduction in our carbon footprint and reductions of 40 per cent in water and energy consumption.”

The Green Apple Awards began in 1994 and have become established as Europe’s major recognition for environmental endeavour among companies, councils, communities and countries.

The awards are organised by The Green Organisation, an independent, non-political, non-activist, non-profit environment group dedicated to recognising and promoting environmental best practice.  Judges for the Green Apple Awards are drawn from the Environment Agency, the Chartered Institute of Environmental Health, the Chartered Institution for Wastes Management and other independent bodies.