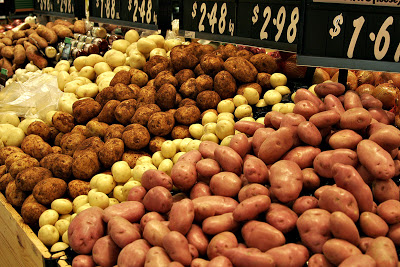 European funding will be crucially important in helping maintain the fabric of Ireland’s potato industry, according to a leading packer.

“The planned generic promotional campaign, which is to be part financed by Europe, will provide real money to actively promote Irish potatoes on our home market,” said Robert Devlin, General Manager of the Co. Meath-based Meade Potato company.

“As a business, we will support the proposed packer levy as it is vitally important for the entire potato industry to commit its own resources in delivering a sustainable future for the sector. We remain totally committed to maintaining our position at the very heart of Ireland’s agri-food industry. ”

The potato industry is expecting word back from Brussels next spring on its proposed promotional campaign for the potato sector, which was drawn up and submitted in conjunction with the British Potato Council.

If the proposed initiative gets the green light from the European Commission, it will pave the way for a €1m, three-year promotional campaign, which will be launched next autumn.

Commenting on the progress of this year’s potato harvest, Robert Devlin said that his staff had completed all digging operations last week.

“It has been a tremendous growing year. Crops yields are coming in at between 22 and 25 tonnes per acre. That’s slightly up on last year. These are gross weights, prior to grading. Obviously the actual market yields will be lower than these figures.

“With it being such a dry year, scab has been a bit of a problem in some crops. But eating quality across the board is excellent.”

Robert Devlin believes that potato markets should strengthen in the run-up to Christmas.

“Rooster is our main variety. With its bright, red skin it is the perfect accompaniment to the Christmas lunch. While we are expecting the traditional lift in prices over the coming weeks, it must be pointed out that potato returns for most of 2014 have been pretty flat.”