Pics: ‘Up close and personal’ with Ireland’s first Fendt forager

Recent news of a ‘test’ forager making its way to the island of Ireland spiked interest in the machinery business. It prompted AgriLand to travel north to see the machine first-hand – to the premises of Fendt and Massey Ferguson main dealer John McElderry. There, we came upon a distinctive Fendt Katana 65.

The Katana is Fendt’s first foray into the field of foragers. Although Katanas have worked for many seasons in other countries, this was its maiden voyage to Ireland. Undoubtedly, AGCO – the owner of Fendt – was keen to see how the machine would fare tackling ‘Irish’ silage.

Fendt Area Sales Manager Sean Gorman explained: “The machine is not going to be used for mass demonstrations but, instead, is being used as a test unit. A small number of contractors, who already use Fendt tractors, have been selected to try it out in Irish conditions. They will give us useful feedback on how it performs here.” 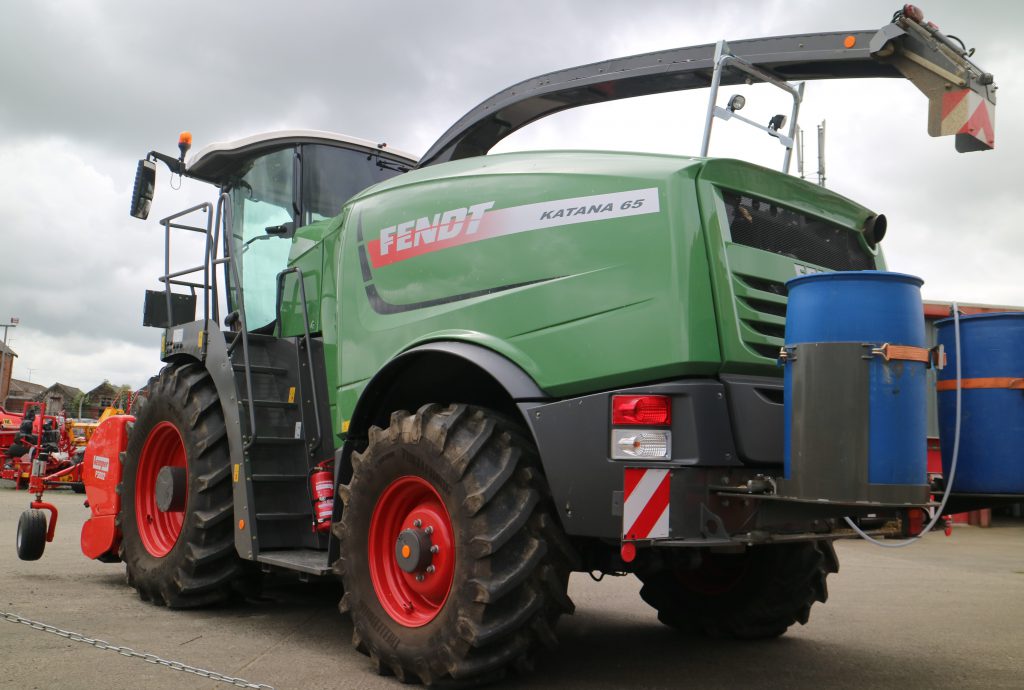 So let’s take a closer look at what all the fuss is about.

Having initially driven through the gates into McElderrys’ yard and seen the harvester, it certainly does ooze presence. The large side panels appear hunched over the wheels and its X5 cab is perched high at the front – with light clusters aplenty. It certainly is a striking machine. 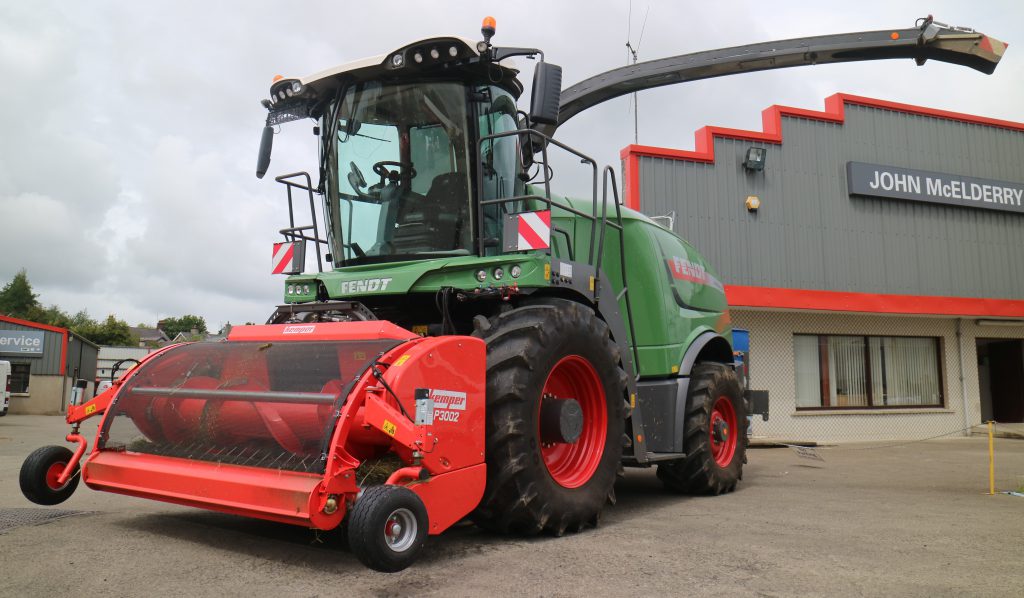 Starting from the front, renowned header manufacturer Kemper has developed a grass pick-up that has been tailored specially for the Katana. According to Kemper, the P3002 pick-up is fitted with a “heavy-duty” drive, which enables high output under extreme harvesting conditions. 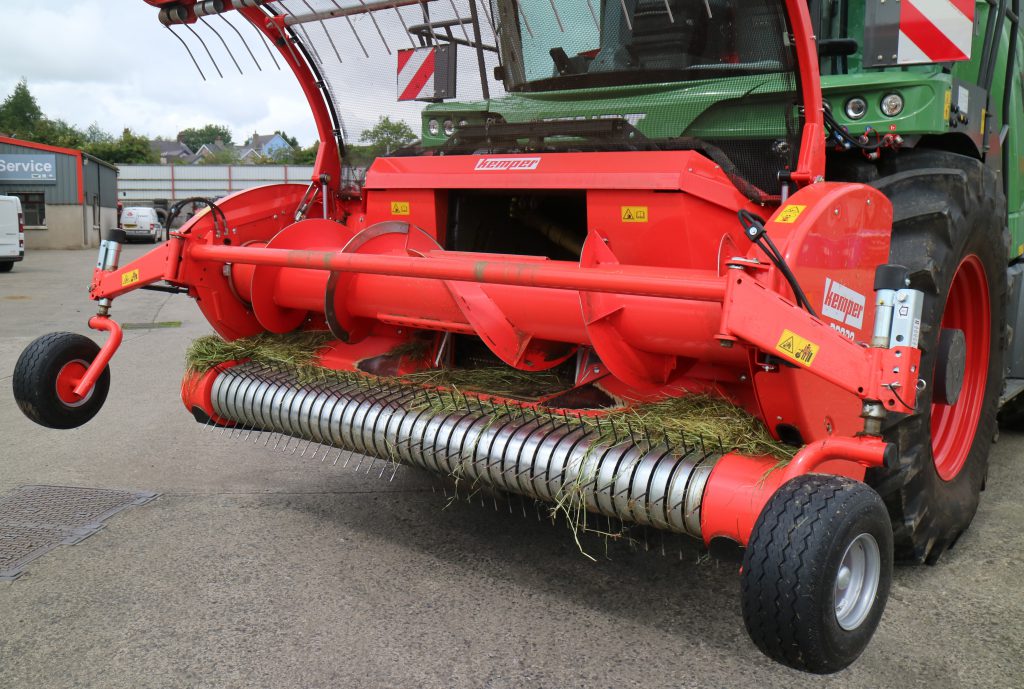 The centrally-integrated ‘feeler’ wheel helps to keep the middle tines clear of the ground; a stepless drive system adapts the speed of the pick-up to match the conditions and the forward speed of the forager. The tines are in a somewhat staggered formation, to even out the flow of grass into the feed-rollers. 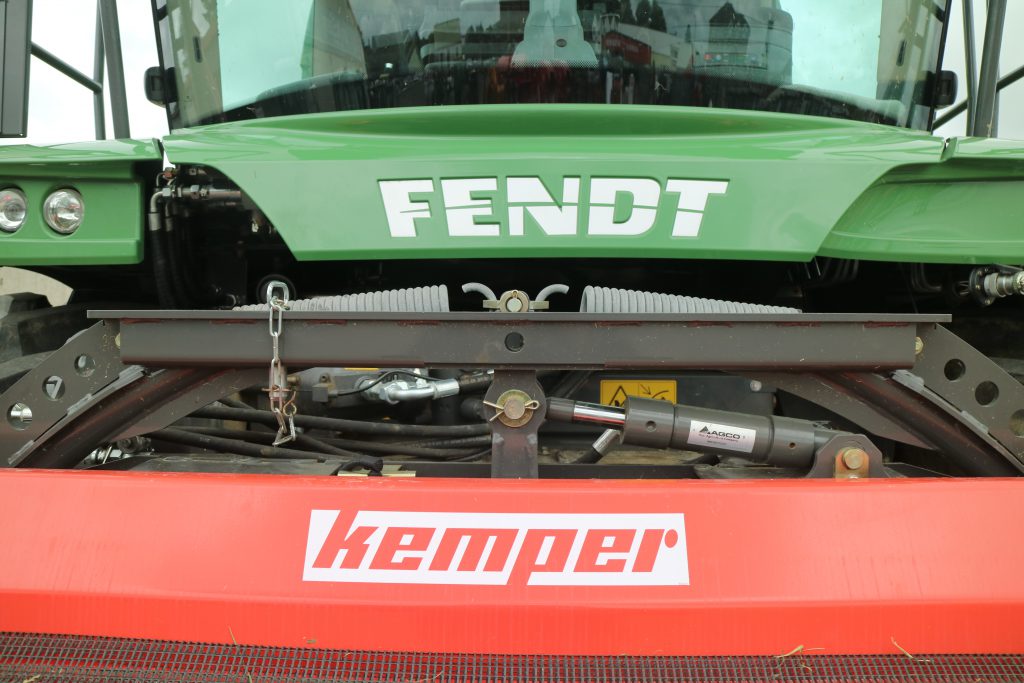 The header is mounted on a swinging frame; it moves on three rollers aided by a cylinder up top. This set-up allows the pivot point to remain in the centre of the feed channel – thus keeping it the same size and, in turn, maintaining a uniform crop flow into the harvester.

The Katana is fitted with six 770mm-wide feed-rollers; most competing harvesters have just four. Chop lengths can be adjusted from 2.6 to 42mm, depending on the cutting cylinder and knife configuration, from the comfort of the driver’s seat. Independent hydrostatic header and feed-roller drive systems allow header speed to be tweaked, whilst retaining a constant cutting length.

To protect the cutting cylinder from the occasional and inevitable foreign object, Fendt says that the metal detector is spaced a “relatively large distance away from the knives”, to minimize the chance of something making it through to the chopping cylinder (drum) once the feed-rollers have stopped. This, claims Fendt, should help to reduce the cost incurred by a serious break-down.

The Katana features a 720mm-diameter cutting cylinder, which Fendt claims is the largest on the market. It is offered in three configurations – with 20, 28 and 40-knife versions. The knives are arranged in a ‘V’ formation; cutting frequency is up to 23,000 cuts/min (40-knife drum) for biogas applications.

From there, chopped material is fed into the discharge blower and, ultimately, into the spout. It boasts 210° of rotation (left-to-right) and an unloading height of up to 6m.

Power is supplied by a 16L V8 Mercedes engine, which kicks out 653hp. This motor, however, is a small fry when compared to its bigger brother in the Katana 85 – that 21L V12 MTU unit shoves out 850hp. 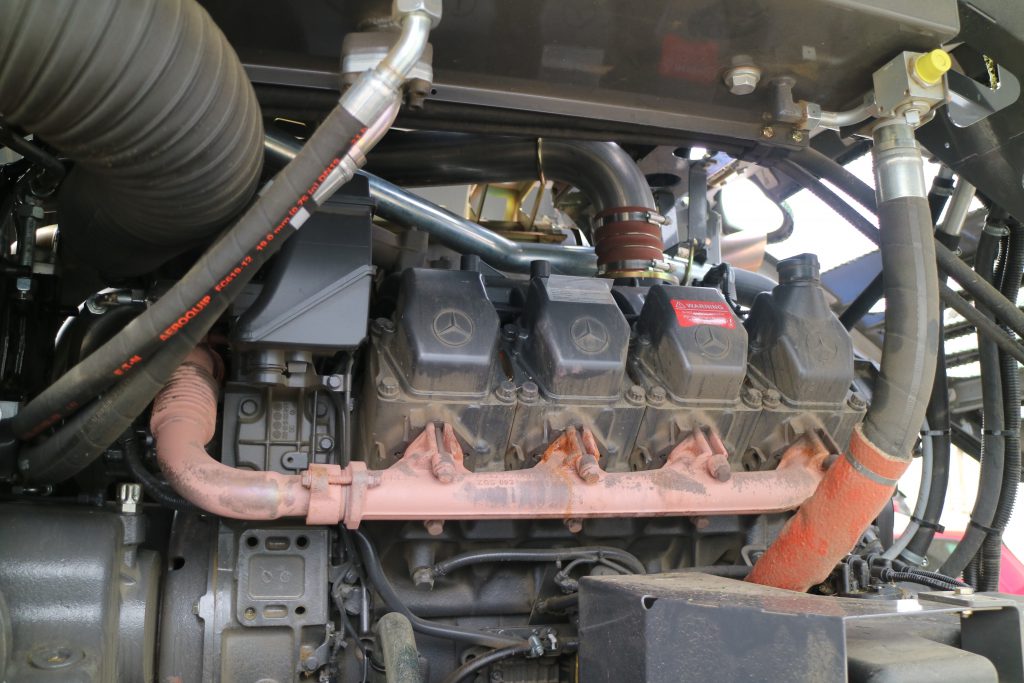 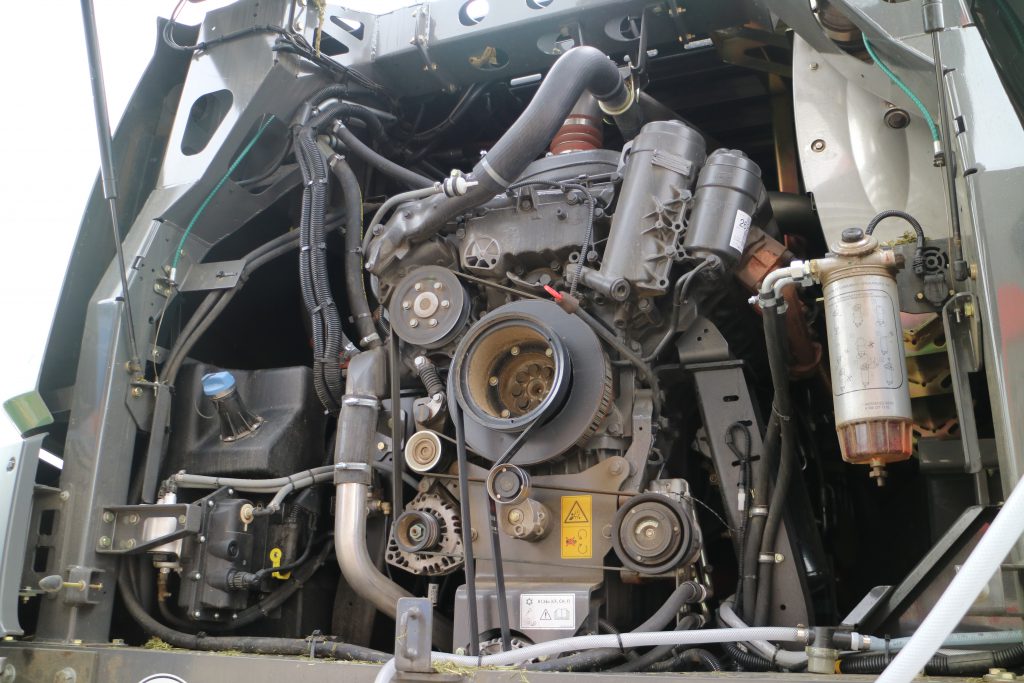 Engine power is transmitted to the chopping unit via a 2-speed angular gearbox, which can be toggled between Eco and Power modes. In Eco mode, engine revs are reduced from 1,900 to 1,520 rpm – while the speed of the chopping unit remains constant. 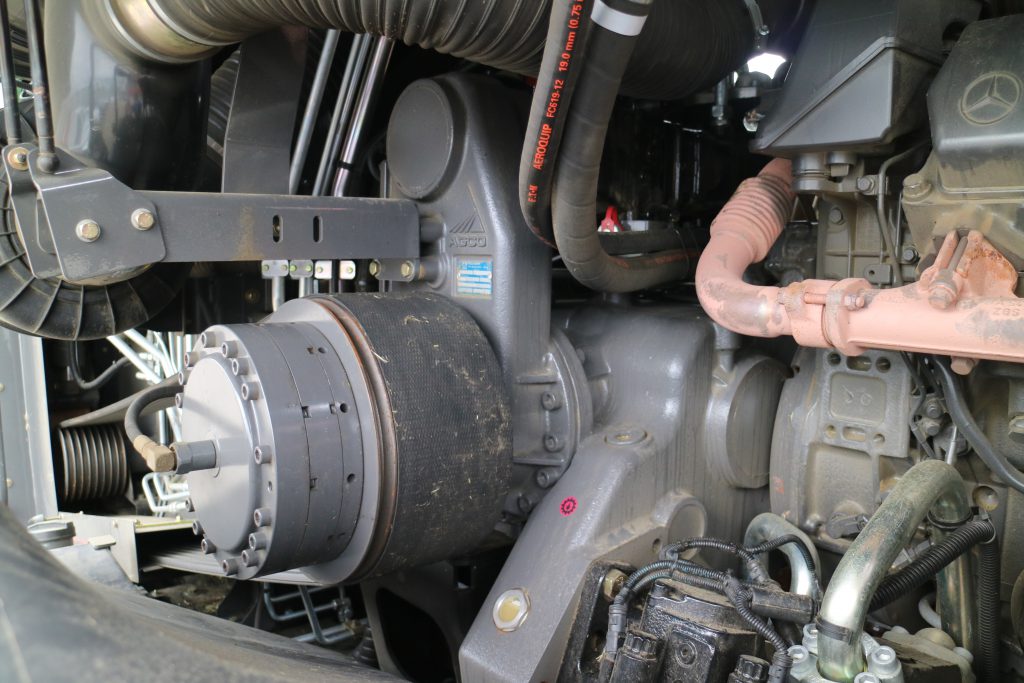 Keeping everything cool under pressure is the job of a beefy cooling system, which is continually cleaned through active dust extraction. 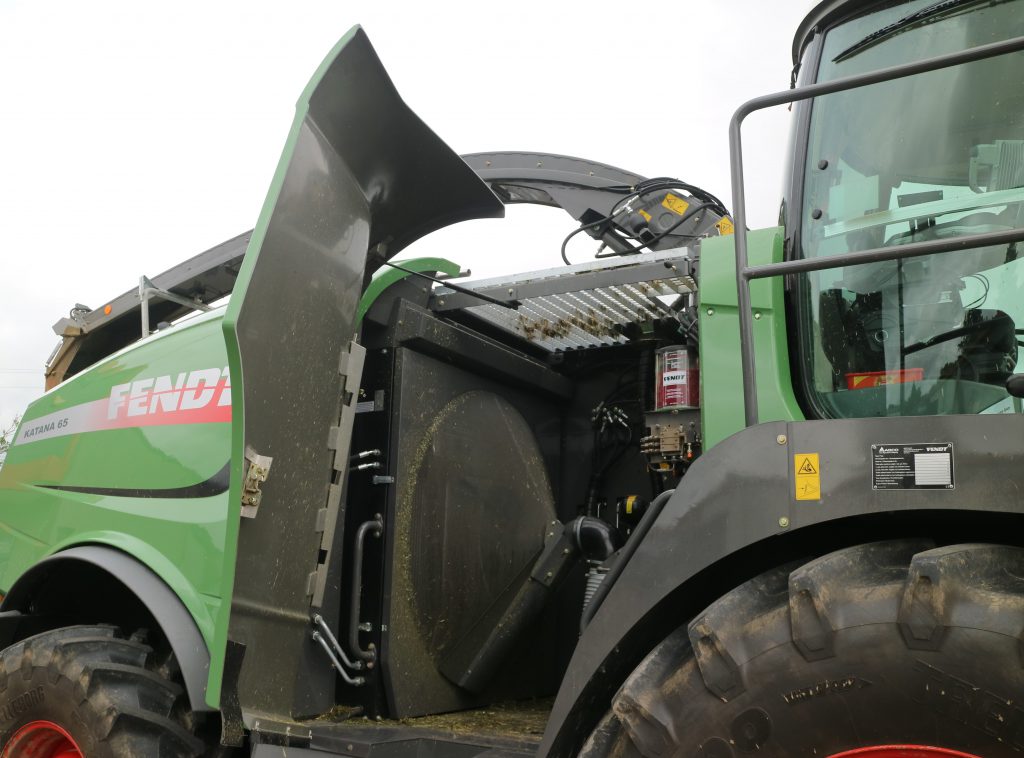 Moving this monster around is the job of a hydrostatic 4WD system, which incorporates independent wheel (drive) motors. The Katana can muster a top speed on the road of 40kph; that’s partly thanks to a clever drive system that transfers extra oil to the front drives when needed – to gain extra oomph.

Comfort on the road and traction in the field are both improved by a rear hydraulically-controlled axle suspension system. 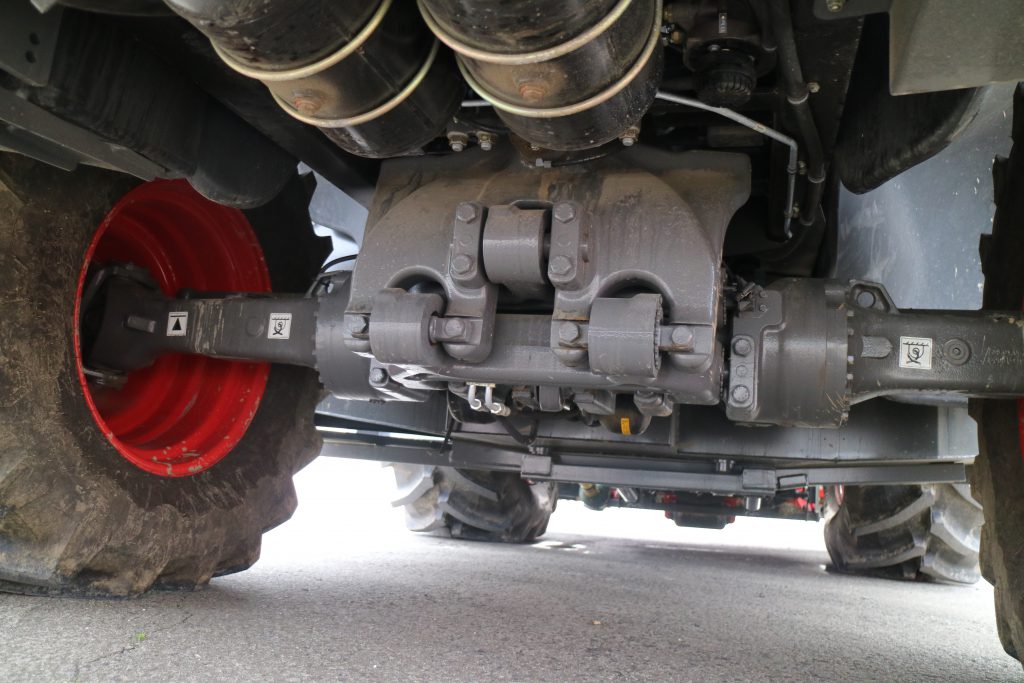 Up top, the operator sits aloft in relative comfort – courtesy of Fendt’s X5 cab. It has an abundance of curved glass – and appears wide but not very deep, compared to cabs on some other foragers.

Many of the controls will appear familiar to operators of current Fendt products. For example, the Varioterminal is the same as that found in the company’s tractors. The multi-function joystick fits nicely in the hand; it comes with robust-looking buttons and switches. 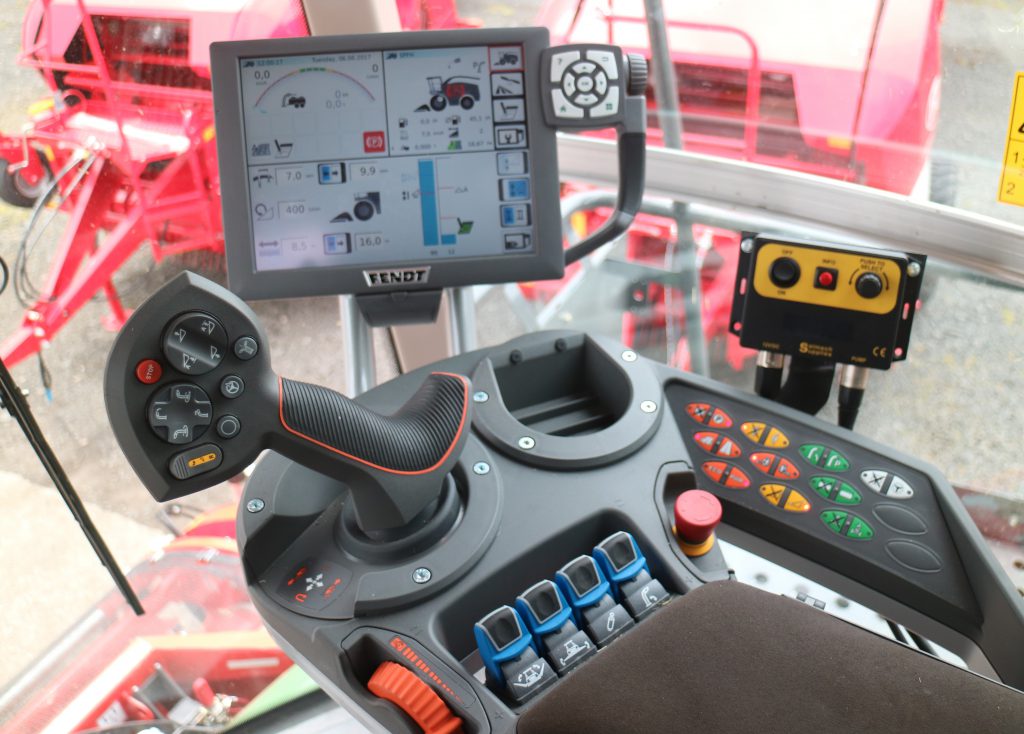 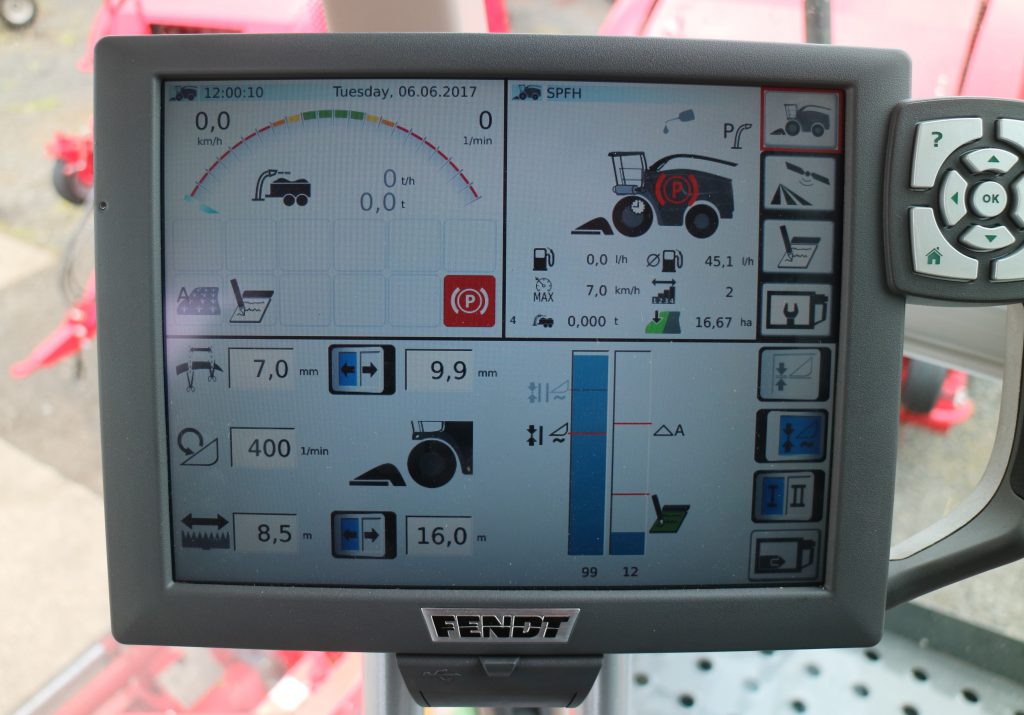 Routine servicing and maintenance is a piece of cake, thanks to the clever, large panels that swing upwards rather than hinge outwards. 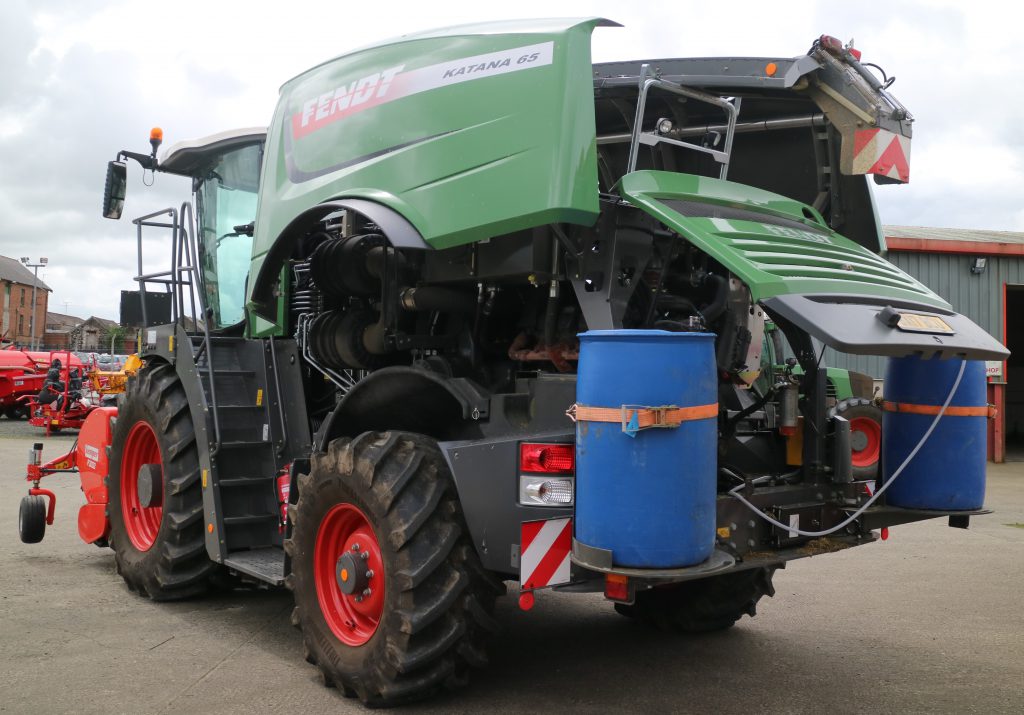 The Katana is what you might expect from Fendt; its build quality appears to be impressive – so too does driver comfort.

Many of the controls and features are carried over from the firm’s tractors, allowing for an easy transition for existing Fendt customers.

Will it be a contender here on the Irish market? Only time will tell. 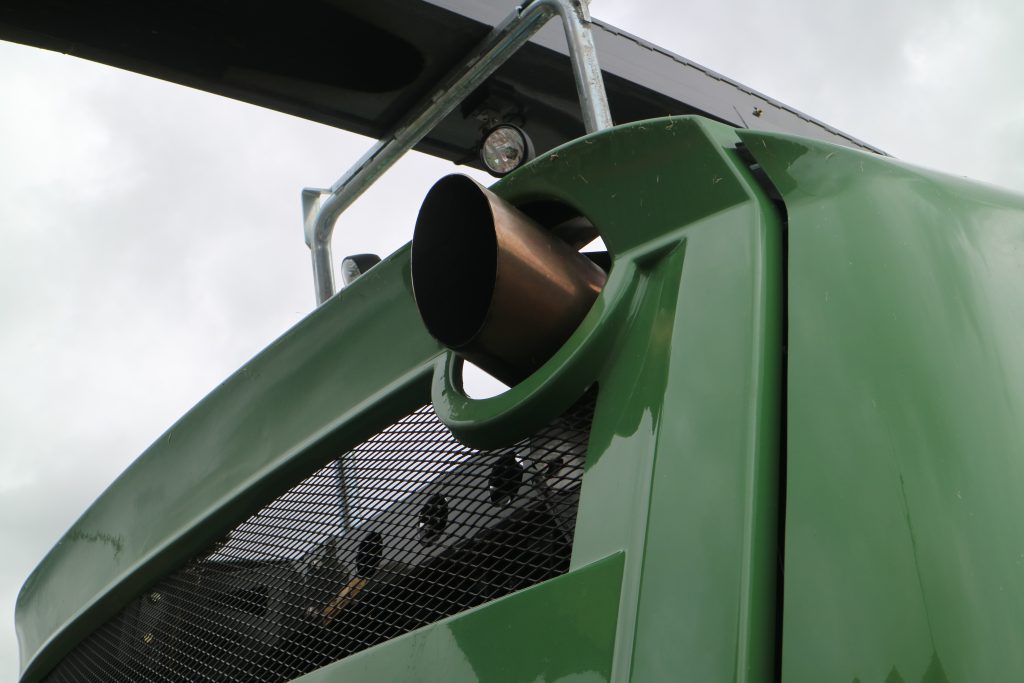 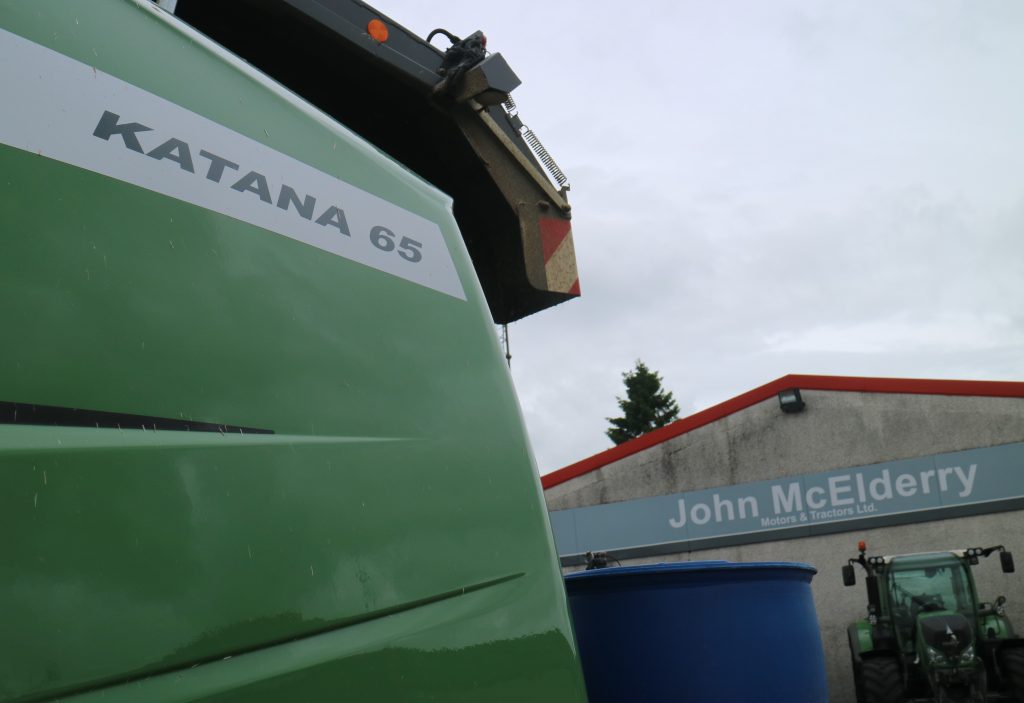