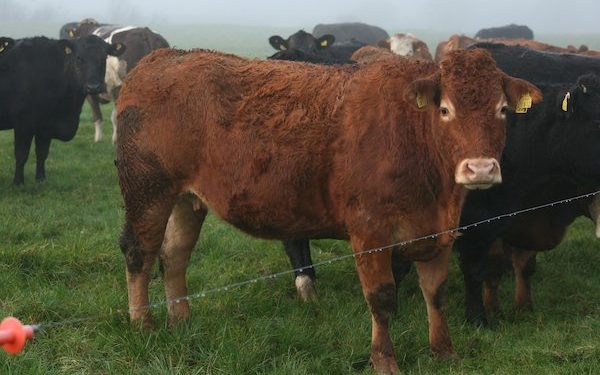 A top price of €1,760 was received for an in-calf heifer at a dispersal sale of the Ballinvoher Farm suckler herd in Ennis Mart, Co. Clare, recently.

The sale of 30 in-calf cows and 19 in-calf heifers took place at the mart on Tuesday, January 17.

“There was a fair interest from farmer buyers and the good prices for cull cows has also helped trade.

The dispersal sale of the suckler herd was just part of the sale at Ennis Mart, where over 500 head of cattle went under the hammer during the course of the day, he added.

Advertisement
Out of the 49 females for sale, 40 of them were either four of five stars in the replacement index.

All of the animals were scanned in-calf, as well as the sex of the calf determined, to either a five star Limousin bull or a five star Simmental bull with both being easy calving.

The herd is expected to start calving on February 6, while all are due to calve within a six week period following that.

Many of the herd was advertised as ranking in the top 10% of the commercial breed for replacement index, with some in the top 1%.

A change in farm enterprise was given as the reason for the dispersal sale, with the herd also achieving a ‘BVD Negative Health Status BHS’ with the Irish National BVD Eradication Programme.

The entire suckler herd was also advertised of being clear of Neospora and tested negative for Johne’s Disease.

A Limousin bull, named Roundhill Hector, was running with the herd for the past three seasons, with his calves proving to be small at birth with exceptional average daily weight gain from birth to weaning.

In order to introduce some better milk traits to the herd a Simmental bull, named Ferryview Ernest, was purchased.