Storm Frank hit the country over the last number of days, flooding more farmland across the country.

Castletru Holsteins, based in Co. Down, tweeted this photo of a sheep rescue.

As well as having a pedigree Holstein herd, Castletru has a flock of pedigree ewes, including Lleyn, Texel and Dorset. 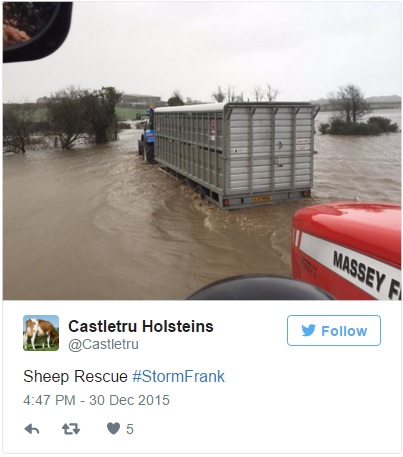 Fintan Kelly tweeted this photo of the aftermath of Storm Frank in Roscommon.

The calm after the storm. Flooding on agricultural land in Roscommon pic.twitter.com/0EA3SGEH5W 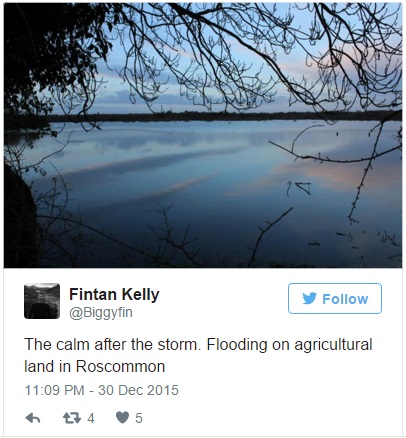 Joe Mag Raollaigh from RTE has been out and about in Galway where he tweeted this photo of flooded land.

Captioning the photo, he said that the air corps helicopter is to lift fodder to aniamls cut off by the floods. 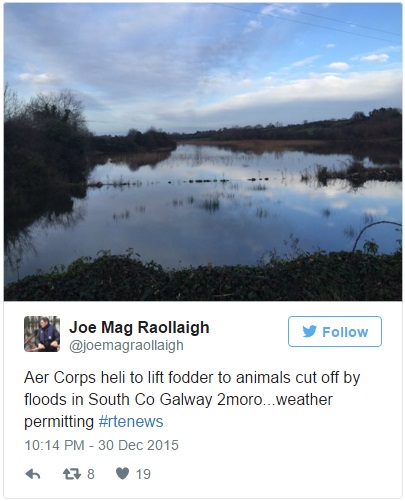 Sharon Slater tweeted this photo as she was travelling through Limerick. It shows the flooding caused by Storm Frank in the area.

Now passing some of the new great lakes of Ireland #flooding #templemore pic.twitter.com/XcwPcjwipK 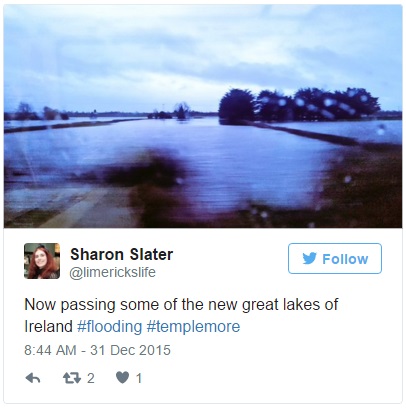 Met Eireann has said that tonight (New Years Eve) showers will become confined to northwestern coastal areas and it will be a dry night with clear spells elsewhere.

The strong westerly winds will quickly moderate and will back southerly overnight becoming light for a time for inland areas, it said.

It will be cold under clear skies tonight, it said, with lowest temperatures of 2 to  minus 2 degrees Celsius, resulting in widespread sharp ground frost and icy patches on untreated surfaces.

There will be a frosty start to New Year’s Day and cloud will soon increase and southeasterly winds will strengthen everywhere bringing rain and drizzle to coastal counties of the south and east during the morning.

More persistent rain will develop in Munster before noon and will spread to the rest of the country in the afternoon and evening, it said.

The rain will be heaviest in south Munster and will add to the flood problems there.

Friday night will continue mostly overcast with further outbreaks of rain in many parts of the country, it said.

Moderate to fresh, east to northeast breezes will prevail, according to Met Eireann making it feel cold but there will be no frost.

Saturday will see overcast, damp or wet conditions persisting for the morning but there will be a steady improvement to mainly dry weather during the afternoon, although cloud is likely to persist, it said.

Calls for a Food Vision Tillage Group to be established

Orientation and maintenance of solar panels

2022 factory cattle supply set to be highest in 23 years