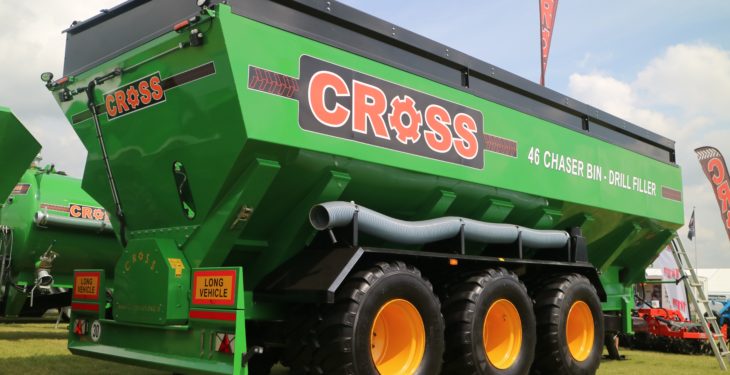 Cereals 2017 is one of the biggest trade shows in either Ireland or the UK specifically focused on the tillage sector.

Located in Lincolnshire, the event took place over two days last week – June 14 and 15 – and a significant number of Irish tillage and machinery enthusiasts made the trek over the pond.

The show featured over 64ha of stands and crop plots, working demonstrations, a drone zone and – new for 2017 – a soil pit, where you could step down and examine different soil structures. 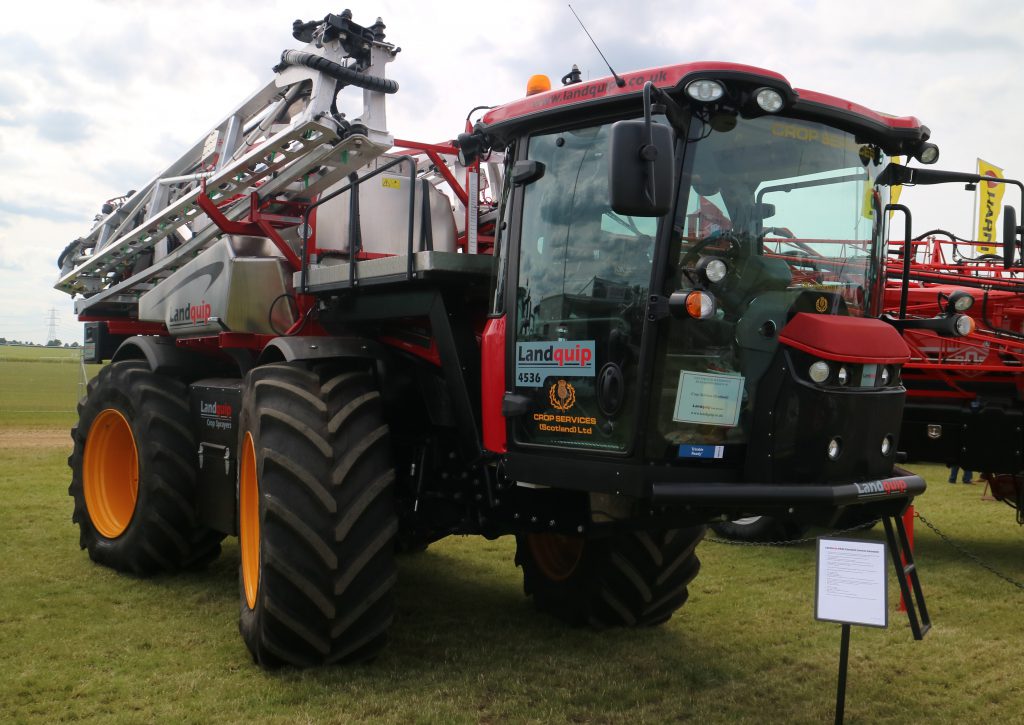 Yes; you read that correctly. There is actually a JCB Fastrac underneath this sprayer.

Landquip is a UK company specialising in sprayers for over 20 years. In that time, it has earned a reputation for modifying Fastracs – among other things  – to accommodate sprayers of varying shapes and sizes.

The sprayer is powered by a 450L/min piston diaphragm pump, which supposedly provides enough output for even liquid fertiliser application. The complete spraying system is controlled via ISOBUS – on an in-cab Trimble screen. 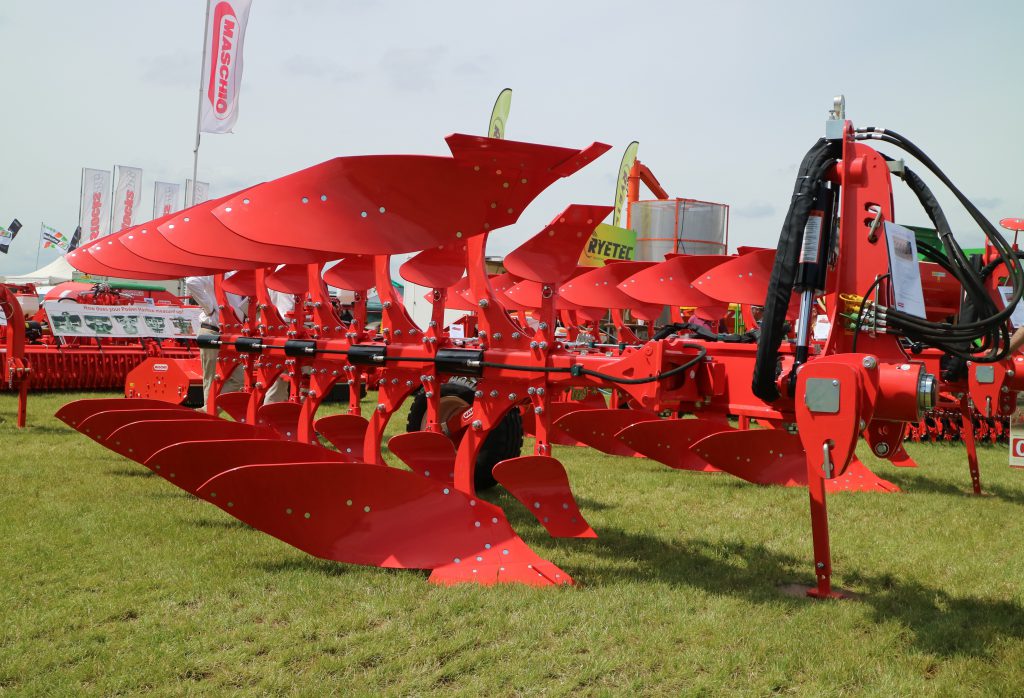 Maschio has begun to market its range of mounted reversible ploughs in the UK – to help boost its presence in the tillage equipment sector.

Both types feature shearbolt protection and manual vari-width as standard; hydraulic vari-width is available as an option.

To tackle typical Irish soils and conditions, a hydraulic auto-reset facility is also available as an option. It comes with a piston-type accumulator, allowing for both vertical and horizontal movement. 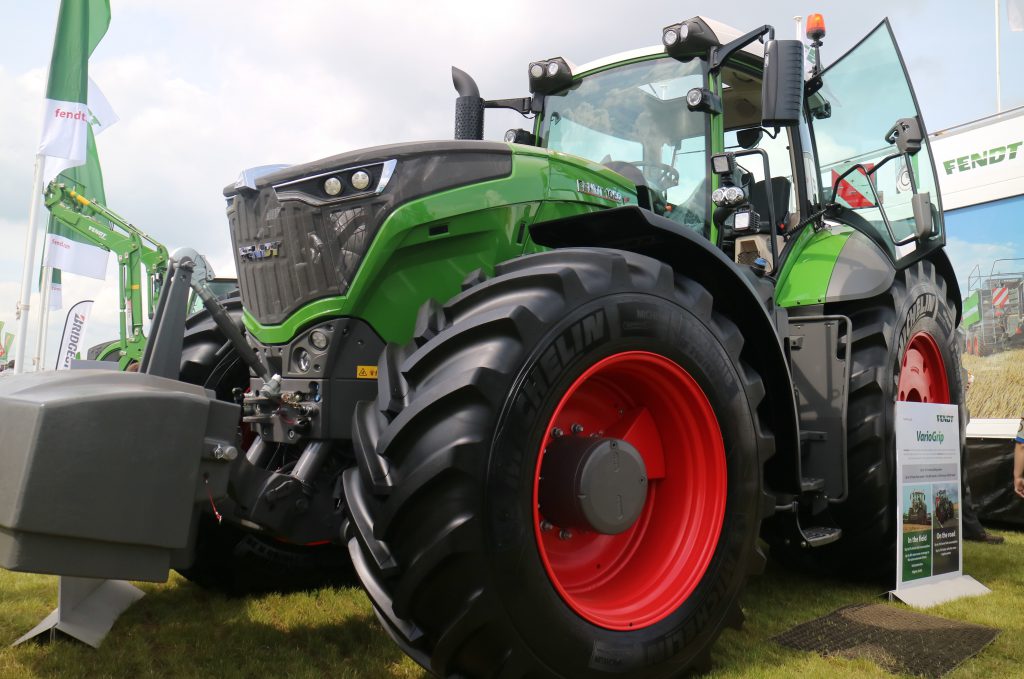 Although not a new release, it is still what I would consider the “holy grail” for machinery enthusiasts – namely the Fendt 1050 Vario. It is the world’s largest conventional (non articulated) tractor; it produces a whopping 517hp.

Powered by a 12.4L, 6-cylinder MAN engine, which is mated to a specially-designed VarioDrive CVT transmission, the 1050 can reach a maximum road speed of 60kph. While that top speed is no longer unheard of for a tractor, do consider that the 1050 tips the scales at 14t (without any ballast weights).

Although no 1000 Vario Series tractors have being sold in Ireland as of yet, they are starting to gather a following among large UK tillage farmer – some of whom are seeking to replace high-horsepower tracked tractors. 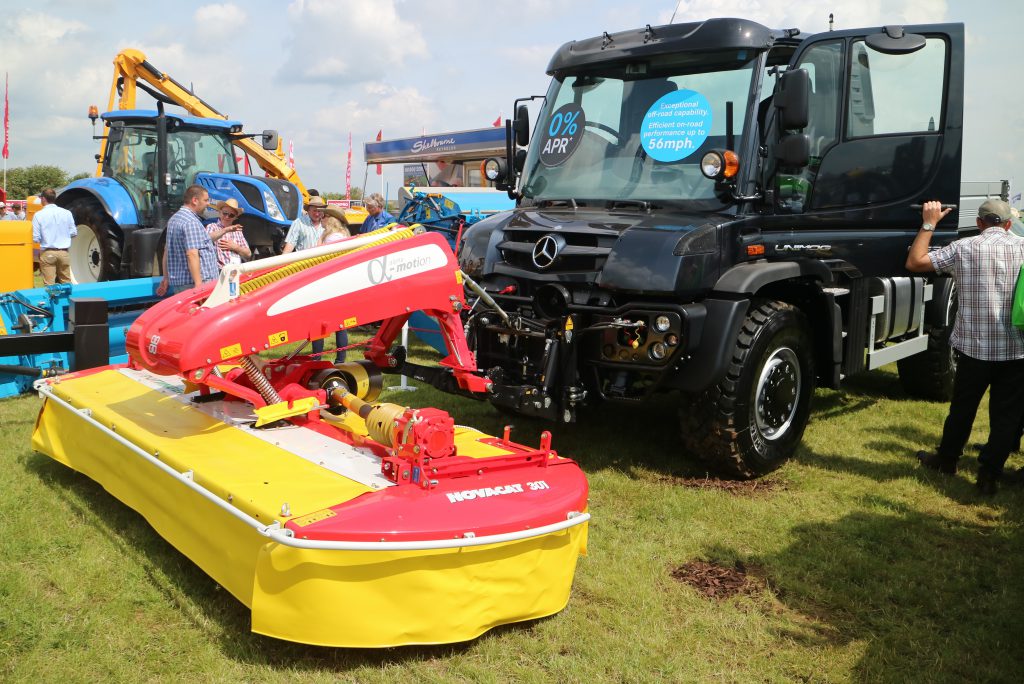 Another relatively unusual machine – at least in an Irish context – is the Unimog.

Built by Mercedes-Benz, the Unimog was conceived as a “universal implement carrier”, with the supposed capability of doing anything that a conventional tractor can – but with the added benefit of a fast road speed (of up to 90kph) and the comfort to match.

Here in Ireland, you might typically see Unimogs at work in forests or with utility and municipal contractors – even with the ESB. In the UK, there is a loyal base of users, employing these machines on spraying, haulage and even mowing duties. Indeed, the 530 pictured here is kitted out with a Pottinger front mower.

The 530 is home to a 300hp engine; it can be specified with both a front and rear 3-point linkage, PTO and hydraulics. Retail cost is in the region of £150,000 excluding VAT. 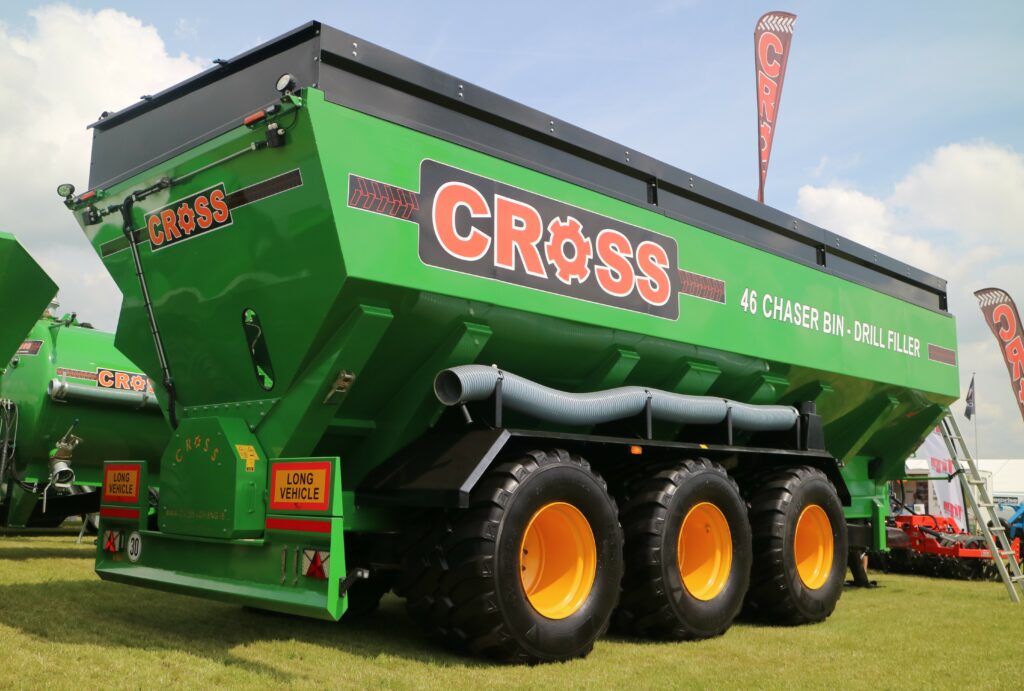 Irish manufacturer Cross Agricultural Engineering, which is based in Co. Kildare, made its annual trip over to Cereals; it had its flagship ‘split’ chaser bin on display.

This chaser bin has a total capacity of 46m³, which equates to approximately 32t. The job of carrying this burden falls to three “heavy-duty” commercial axles – with rear steering and LGP (Low Ground Pressure) tyres.

Due to its split bin design, the chaser is ideally suited to both seed and fertiliser applications. According to Gary Cross, who designed the machine, it boasts an unloading time of just three minutes. 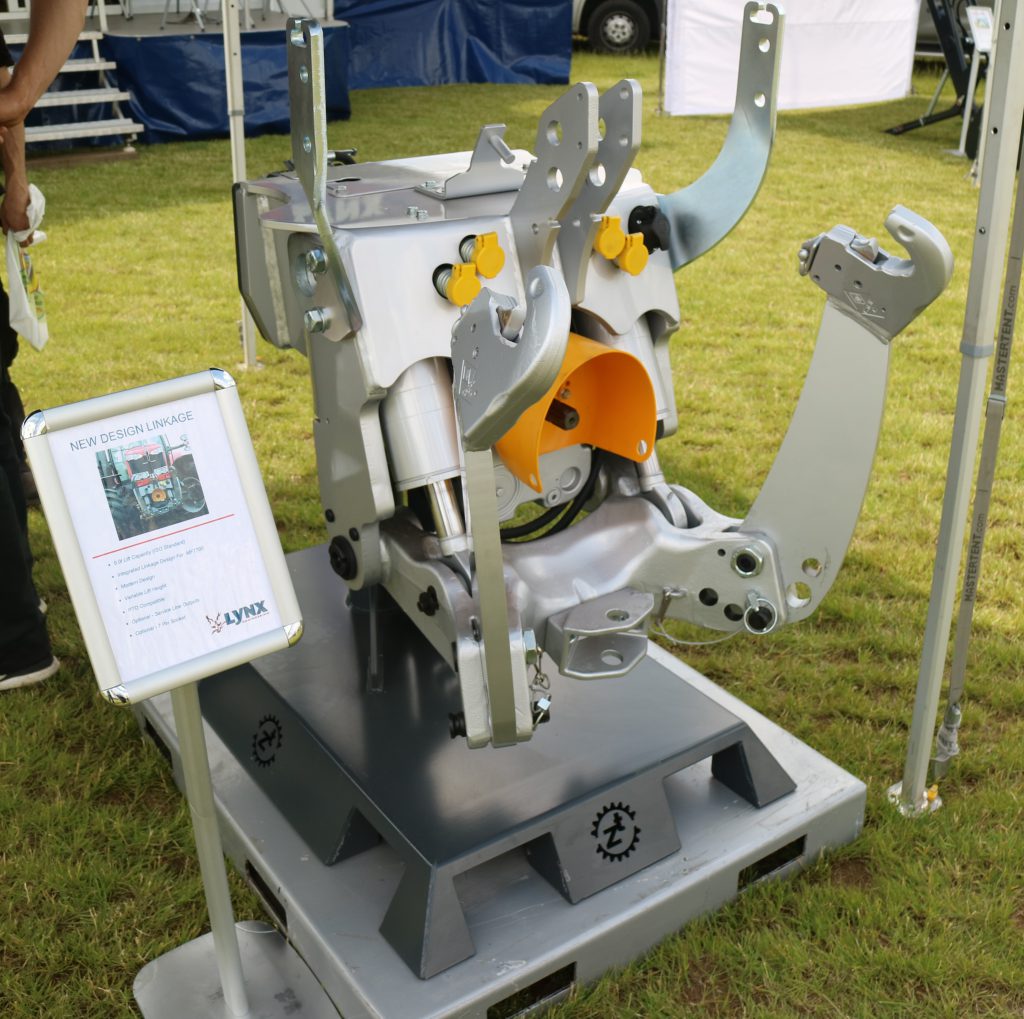 The lift frame is now supposedly compatible with all PTO types – as standard. It also offers a 10cm lower working position, thanks to the addition of another slotted hole. This allows the operator to adjust accordingly, when over-size tyres are fitted.

Completing the updates are new integrated services, as well as two top-link positions to further extend the range of adjustment. Zuidberg is handled in Ireland by Dublin-based Farmhand. 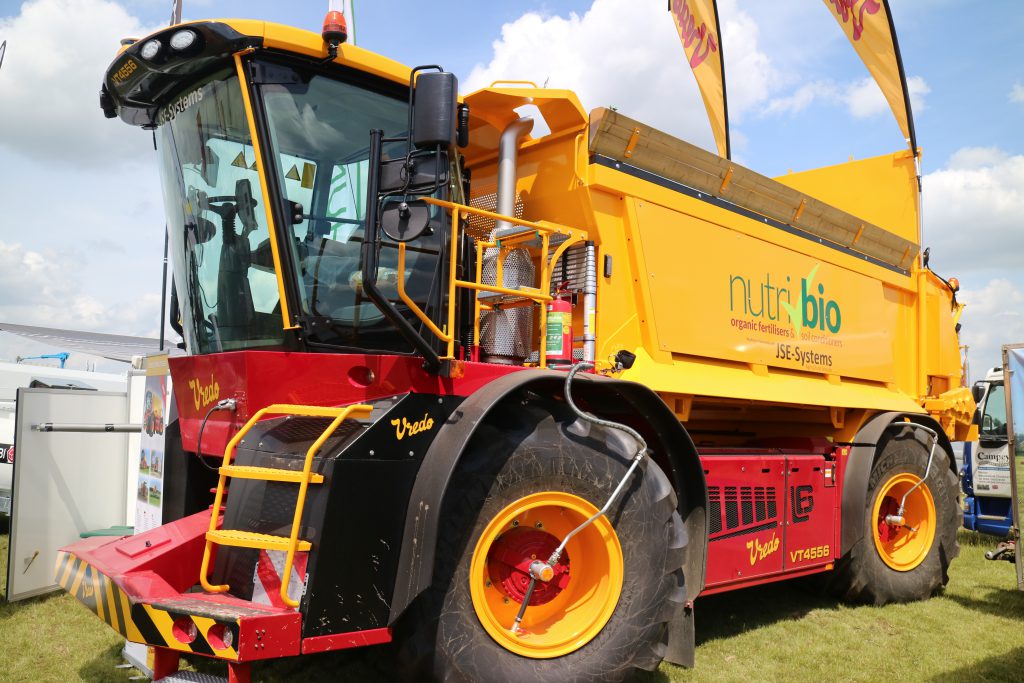 Dutch company Vredo had one of its multi-platform, self-propelled machines on display at Cereals.

This machine uses a clever ‘twist lock’ system, similar to that found on truck trailers, to secure an array of implements onto its chassis (platform).

Powering this beast is the job of a Scania 6-cylinder engine, which shoves out no less than 450hp. The engine is mated to a hydrostatic drive, which delivers power to all four wheels – propelling the lofty machine to a top speed of 45kph in the process. There is also a 6-wheel version – to cater for bigger and heavier implements.

Although new versions of these machines are unlikely to be seen in Ireland soon, it is conceivable that some older, used versions might find homes here. They are typically used for high-capacity slurry injection or muck spreading.

Retail price for the machine (pictured above) is €400,000 excluding VAT – including the spreader. According to the sales representative on the stand, no less than 15 new machines were sold to UK buyers this year alone. 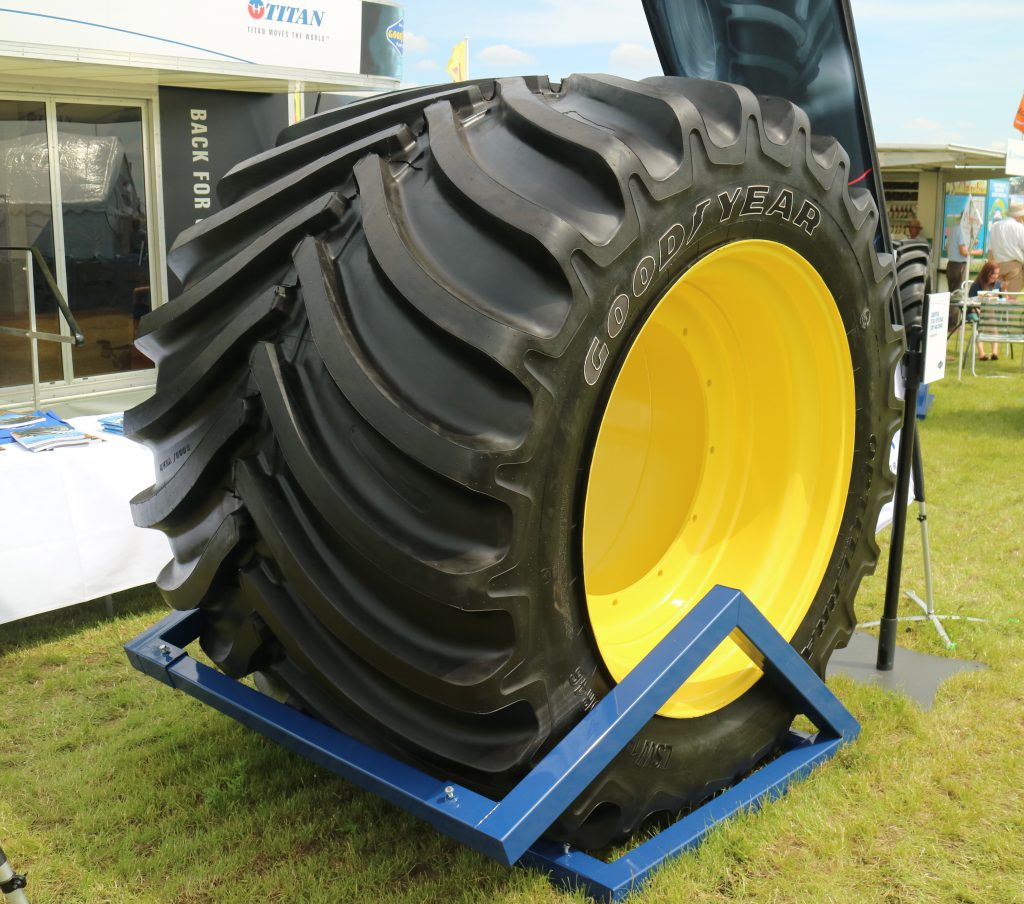 These tyres are not cheap. They list at €12,000 excluding VAT each. 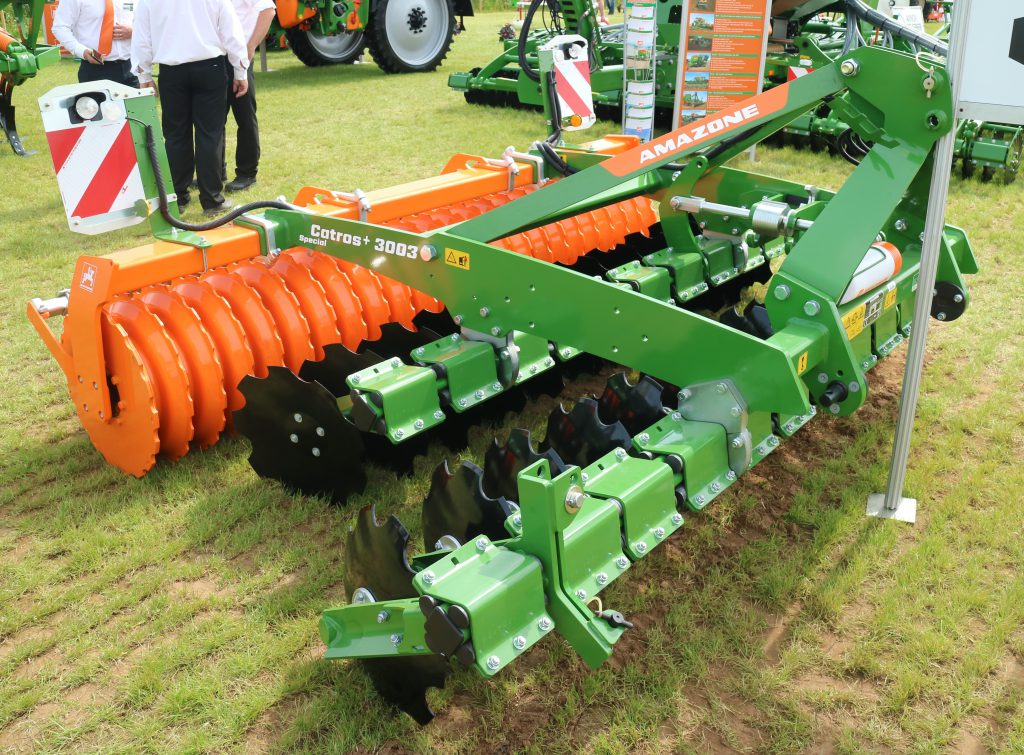 The popular 3m-wide Amazone Catros disc harrow/cultivator has undergone something of a revamp; it now features a new frame design as well as a simpler adjustment system for depth control.

This machine will make its Irish debut at Crops & Cultivation in Oak Park, Co. Carlow, on June 28. According to Amazone equipment specialist Val McAuley from Farmhand, the new Catros will – somewhat unusually – be up to €1,000 cheaper than its predecessor. 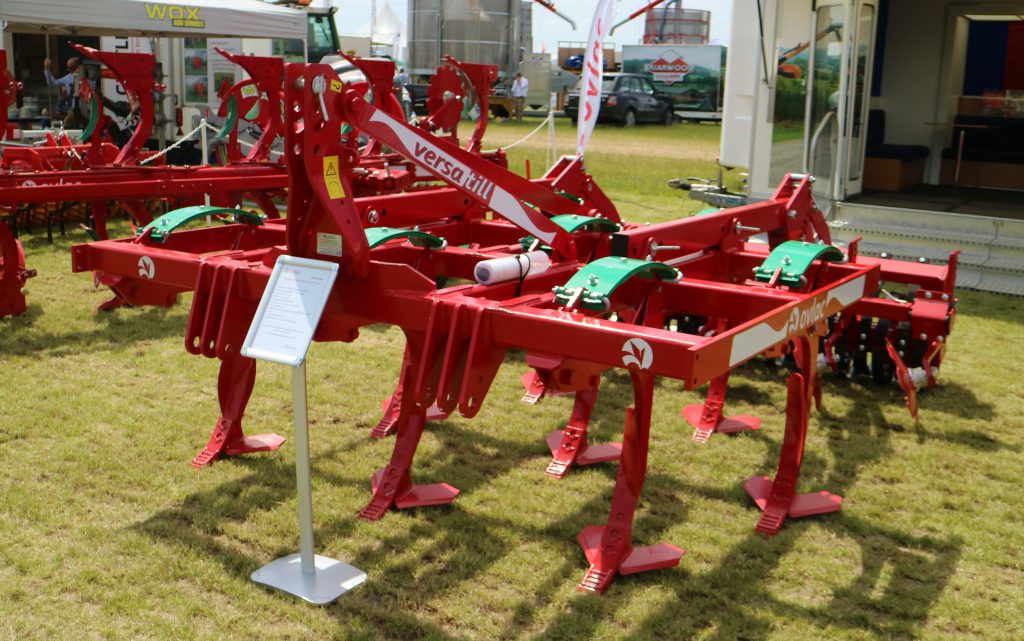 The company claims that this implement is ideally suited to smaller horsepower tractors – up to 120hp. It is fitted with tines that are made from solid Hardox, complete with Tungsten Carbide plated tips.

The Ovlac importer for Ireland is M Large in Co. Antrim. 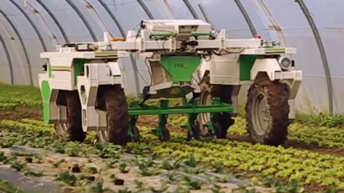 Video: Have your weeding done by robot Dino