Farmer fury: ‘At this stage we’d be better off on social welfare’

Close to 1,000 members of the Irish Farmers’ Association (IFA) gathered outside Cork City Hall today, Wednesday, May 1, to protest in opposition to the Government’s “lack of action” to protect the beef sector from Brexit.

AgriLand attended the protest and spoke with some of the people involved to see why they are frustrated with the current situation in the beef sector.

Chairperson of Galway IFA Anne Mitchell outlined: “We have been losing €200 to €300/head for our cattle and no other sector in Ireland could be expected to live in them circumstances. 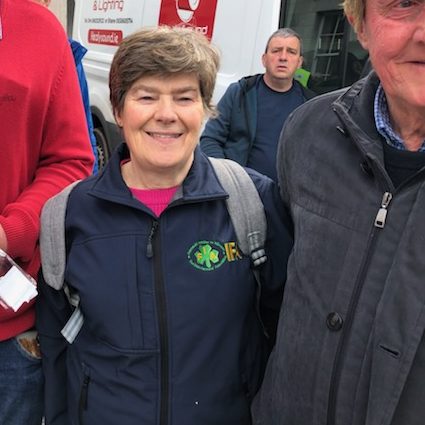 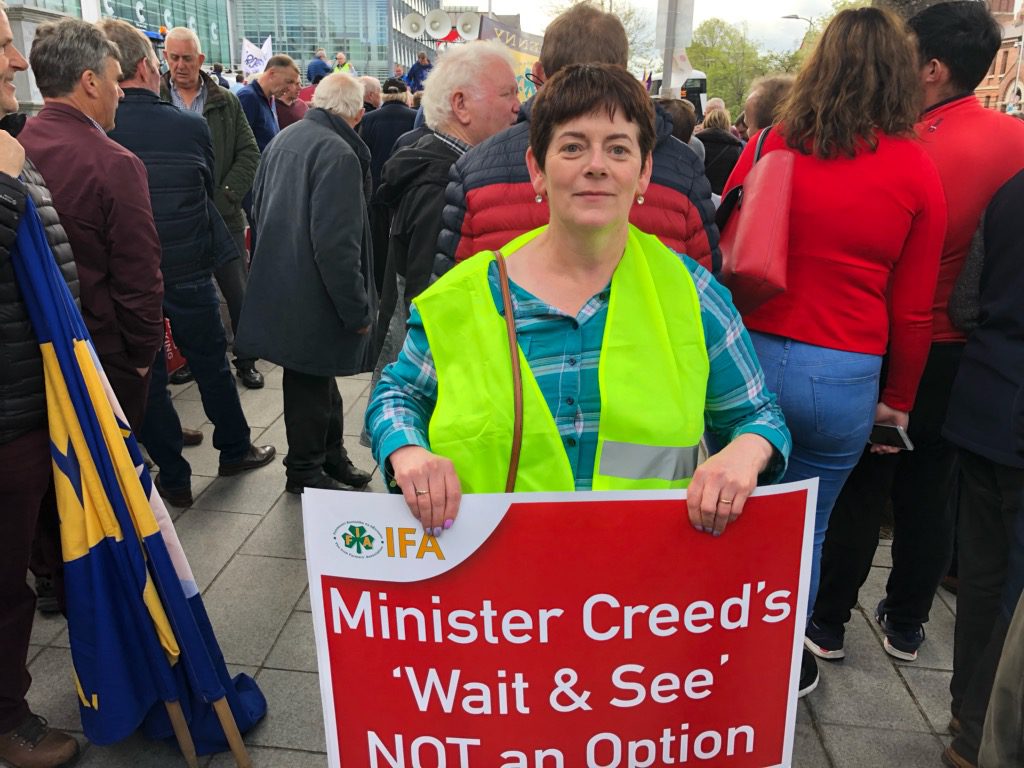 “This didn’t just happen today, this happened almost three years ago when the UK voted to leave the EU.

“As farmers, we have had enough. We have seen, over the last six months in particular, where livestock farmers have been completely decimated.

“I hear ministers talking today about issues, we haven’t an issue; we have a problem. I hope that ministers are finally going to do something.

I’m sick of hearing that it’s an EU decision. This is something for our Government. They have to recognise that farming is the backbone of this economy and it was during the recession.

“We are sick of the Government’s ‘wait and see’ approach. It’s time for the Government to go and actually back farmers and get the support farmers need to survive.”

Wexford IFA’s Grain Committee chairman, John ‘The Boiler’ Murphy, said: “We’re here in support of the beef farmers. This beef thing has gone pear shaped for over a year now. 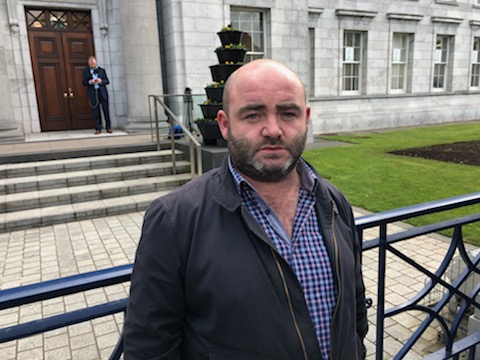 “Last May prices started to really fall and it’s being put down to Brexit. We’re here pushing the Government who have said there is compensation in Europe; but they haven’t released it.

A total of €100 million has been lost by beef farmers as a result of Brexit.

“It would stabilise the beef industry in Ireland. The industry is massive and forms part of Ireland’s biggest exports and yet they’re letting it go down the tubes.

“We will be pushing for this until it comes; there’ll be no stop to it.”

Nigel Renehan regional chairman for Ulster and north Leinster said: “I’m here to support Irish beef farmers who are absolutely on their knees and the Government is in denial of it. 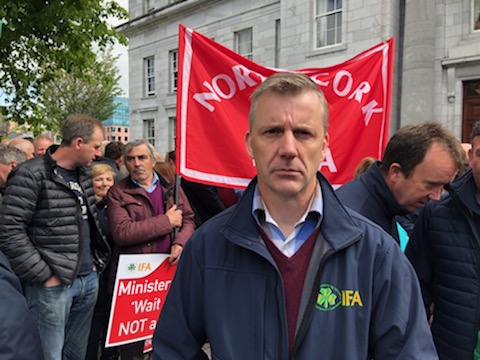 “My message to the Government is: ‘Either shape up and support the farmers or get out and let somebody else in that’s fit to do the job’.”

Chairperson of Cavan IFA, Elizabeth Ormiston, said: “I traveled to Cork today to fight for our rights as beef farmers. Our livelihoods are in tatters here and we are absolutely ruined. 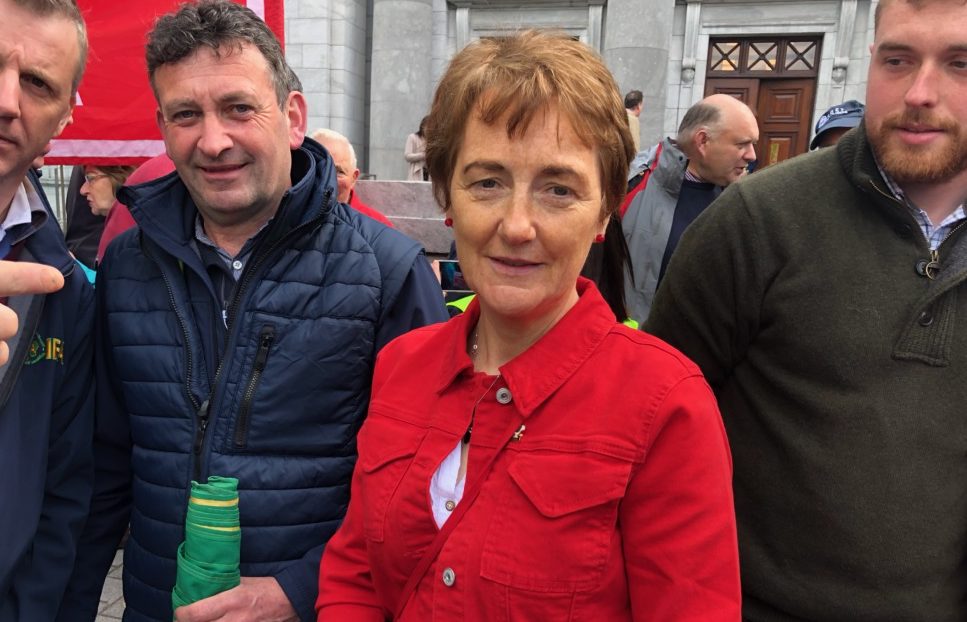 “They’re talking about Brexit and having money in place for Brexit; but it has happened as far as the Irish beef farmer is concerned.

“We’re down €101 million for the last year. Our incomes are on the ground and we need help and we need it now.”

Ormiston outlined that, on behalf of the IFA, she has also recently been lobbying the European Commissioner for Agriculture and Rural Affairs, Phil Hogan, regarding a Brexit support package.

The chairman of the Meath IFA branch, John Curran, said: “I’m here to represent the beef farmers and farming families who have been suffering losses incurred to their enterprises as a result of the beef trade. 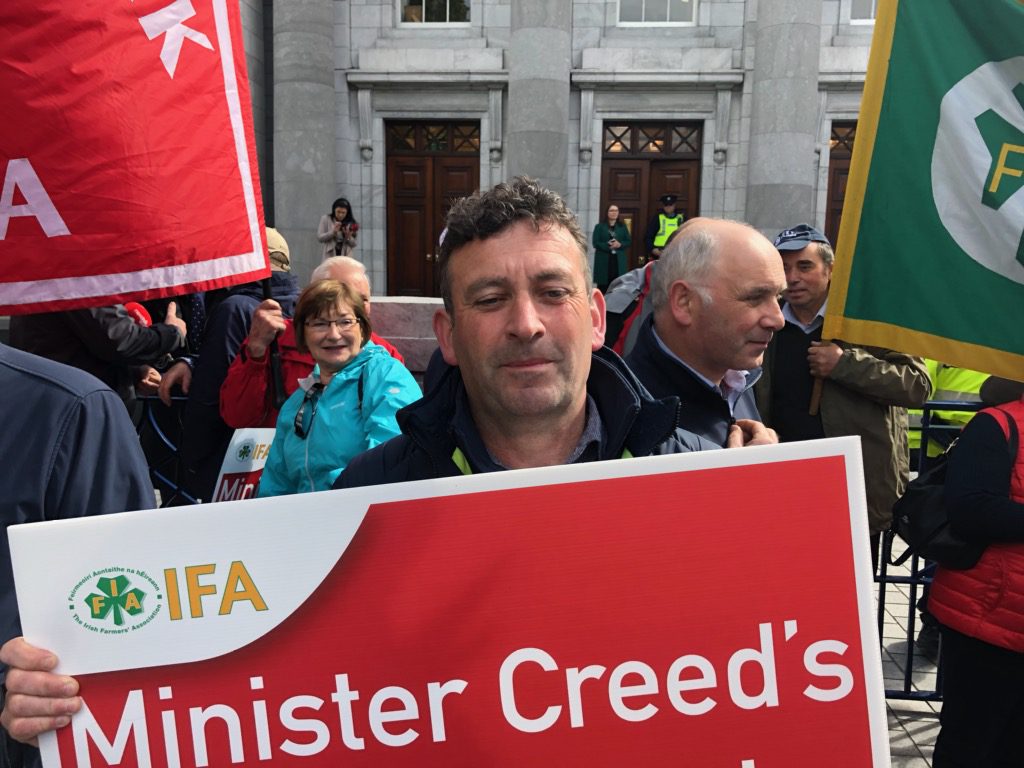 “Farmers, including myself, have lost up to €180/head on each animal that they have sold. That amounts to thousands of euros of family farm incomes.

“We are looking for retrospective payments for the losses that have been incurred over the last six months due to Brexit-related issues,” he said.

IFA beef protest: 'Time for talking is over'