Over 140 new outbreaks of Bluetongue reported in France

In the second half of October there has been 143 new outbreaks of Bluetongue disease in France reported to the World Animal Health Organisation (OIE).

This brings the total number of outbreaks in France to 621, with outbreaks generally consisting of between one to four infected animals.

Out of the 143 new outbreaks there was only one related to a flock of sheep, with the rest relating to cattle in herds ranging in size from five to 484, the report shows.

In total there was 18,120 cattle susceptible to the disease, with just 160 animals testing positive, the OIE report shows.

Meanwhile, Bluetongue was also detected in a flock of eight sheep with only one of the animals testing positive.

All of the cases were detected as part of active surveillance and as part of pre-movement testing, while none of the infected animals died from the disease or had to be destroyed/slaughtered because of it.

The risk level in the UK for the disease has remained at medium for this time of year, the Department for Environment, Food and Rural Affairs (DEFRA) has stated.

The extent of the restriction zone has not changed as a result of these new cases and has been the same since April of this year, according to DEFRA. 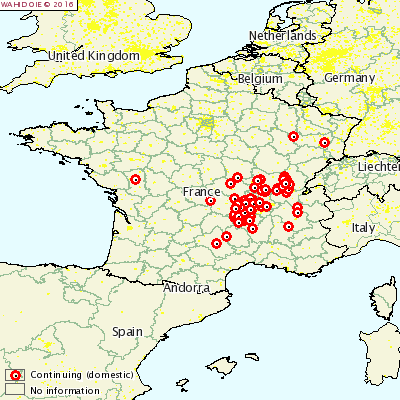 The outbreaks have been detected mainly in the Allier, Aveyron, Drôme, Loire, Haute Loire, Puy de Dôme, and Rhône regions of France, with a total of 473 outbreaks reported this year alone.

French authorities are continuing to carry out sample tests of herds along the boundary of the restriction zone to limit the spread of the disease, DEFRA has said.

Risk Level In The UK

Factors such as midge activity, weather conditions and the level of disease in northern France affect how the risk level changes in the UK.

DEFRA advised that the risk level in the UK cannot be changed at the moment due to the temperatures remaining mild enough for midge activity.

However, DEFRA expects the risk level for the disease will probably decrease in the coming weeks.