Pending live export deals with Libya and Algeria will help put a realistic base to Irish cattle prices, according to ICSA General Secretary Eddie Punch.

“The Libyan contract is a done deal with a shipment of animals due to leave Ireland over the coming weeks. This will include bulls over 500kg.

“The Algerian contract has yet to be finalised. But it looks a definite possibility. And, of course, this is adding to the live export trade that is already taking place, where Turkey is concerned.”

Punch said that beef prices should remain at pretty optimistic levels throughout May and June.

“The factories are confirming a strong demand for all the beef they are bringing to market. Cattle coming through the system now are the tail-end of this year’s winter throughput. It will be at least July before grass-fed cattle start to come forward in any real numbers.

But predicting cattle prices at the present time is a very risky business. There are just too many variables coming into play – Brexit and fluctuating currency values being two of them.

This puts farmers in the driving seat to bargain for better prices. There is definitely upward momentum in the price of beef cattle at the minute, as processors aggressively compete for cattle in order to keep up with customer demands.

“There will be opportunities to squeeze out more for heifers,” he said.

“Processors are also starting to show more flexibility in their specifications, with some producers being given flexibility to hold cattle to heavier weights.” 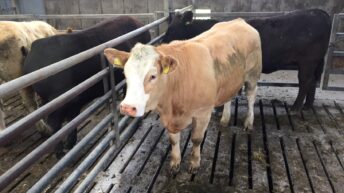