Firefighters in counties Dublin and Donegal were battling illegal gorse fires over the May bank holiday weekend, as a status orange high fire risk warning remains in place.

Members from the Kilbarrack unit of the Dublin Fire Brigade were busy tackling a ‘large gorse fire’ just off Carrickbrack Road in Howth on Monday night, May 1.

Firefighters right across Co. Donegal were busy over the long weekend; up to three gorse fires were reported to have taken place in the past few days.

Units of the fire brigade from various stations were called to deal with gorse fires in the Lough Eske region of the county, as well as in the villages of Burtonport and Fintown.

The fire in Fintown, which was discovered last night (Monday, May 1), reportedly set ‘hundreds of acres’ of land ablaze. It is believed the wind helped the blaze to spread quickly.

Met Eireann has reminded the public that there is a high risk of fires this week due to an extended period of warm and settled weather, along with the undergrowth being dry.

Busy night for the crew of A watch. Large gorse fire just off Carrickbrack Road in Howth. pic.twitter.com/Ss9uTJljmS 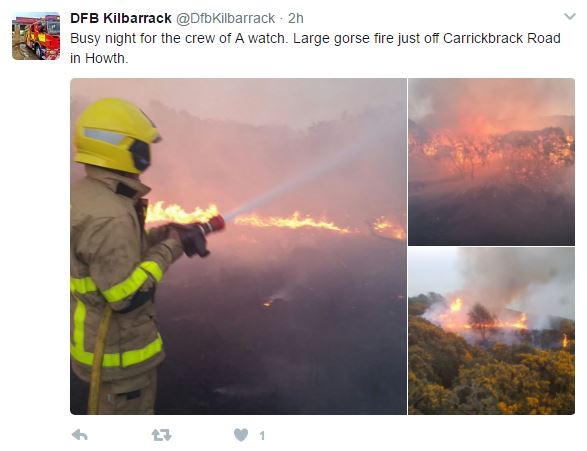 It is understood that no one was injured in any of these fires and that no damage was caused to any properties.

A status orange high fire risk warning, issued by the Department of Agriculture, Food and the Marine, remains in place.

This warning is deemed to exist in all areas where susceptible fuel types are present close to forests and other assets, the Department added.

Detailed advice for forest managers and owners on how to deal with the threat of fires is available on the Department’s website.

The Irish Wildlife Trust (IWT) has condemned the lighting of illegal fires outside the designated burning dates and has asked members of the public to get in touch with their local politicians to voice their concerns.

Alongside Birdwatch Ireland, An Taisce and the Hedge Laying Association of Ireland, the IWT has collected close to 28,000 signatures on a petition in opposition to proposed changes to laws around burning and hedge-cutting.

A target of 30,000 signatures was set when the petition was launched in 2016. The petition asks the Minister for Arts, Heritage and the Gaeltacht, Heather Humphreys, to reconsider the proposed changes.

These changes would allow for the burning of vegetation in March and the cutting of hedgerows in August.

The IWT, along with its partners, believes a proper hedgerow and upland management regime can be established that works for farming, road safety and wildlife.