Can’t win for losing: Lightning carnage at US dairy farm 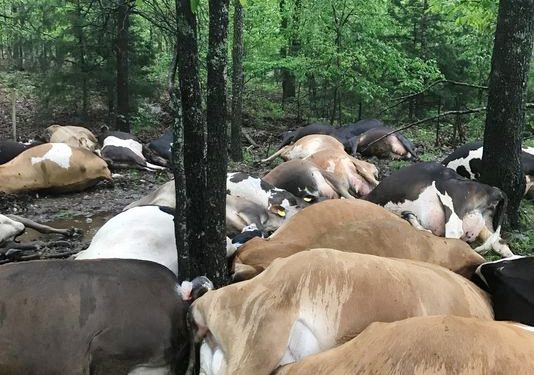 A US dairy farmer had his herd decimated by a lightning strike last weekend.

Jared Blackwelder, who keeps organic dairy cattle at his farm near the town of Cabool in Texas County, Missouri, saw a blinding light on his way home from milking in the early hours of Saturday morning, according to the Springfield News-Leader.

“It was so bright I couldn’t hardly see,” he told the newspaper. “It just brought fire down the fences.”

“I went down over the hill and seen them laying there,” he told the local paper. “They were just piled on top of each other. They were huddled up, trying to get out of rain.

Advertisement
Photos show the dead cattle lying on churned-up mud, among a stand of trees.

Blackwelder said he had lost animals to lightning strikes before, but never on this scale. A local vet confirmed the cause of the deaths as lightning. He said he had seen animals killed by lightning over the course of his career, but no more than half a dozen at a time.

“It’s not like they are pets. But the ones I’m milking, I’ve raised every one of them,” Blackwelder said. “Dairy cattle are a little different because you mess with them twice a day. It knocks you hard.”

Photos of the disaster were published on the Facebook page of a local farmers’ group, with a message which read: “31 of ’em hit by lightning today. Can’t win for losing,” it said. The post has racked up over 15,000 shares, with people from all over the world expressing sympathy.

The dead animals represented a fifth of Blackwelder’s organic-certified herd, which has been reduced to about 120. He reckons each cow was worth $2,000-2,500, putting his financial loss at over $60,000.