Ophelia: How my quick-thinking family stopped the roof from coming down 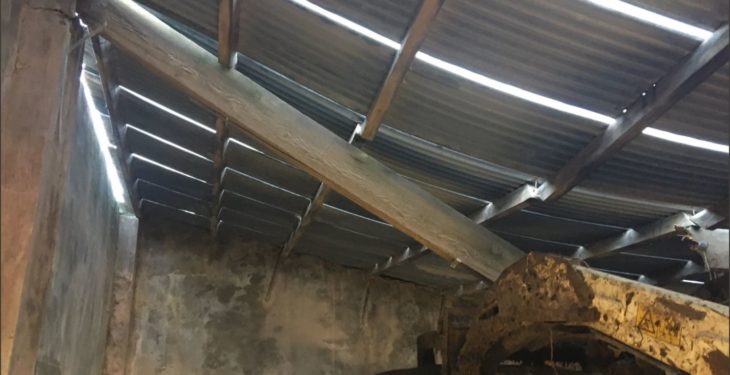 Ulster braced itself for the worst, but by the time Ophelia reached the northern counties she had lost much of her puff. Yet, that didn’t stop her from causing damage.

Windspeeds of just over 115kph were recorded at Orlock Head in Co. Down, but it was only a fraction of what our counterparts in the South faced, with gusts of 190kph recorded in Co. Cork.

According to Met Office, between five and 12mm of rain fell across the province during Ophelia’s visit – not quite enough to cause the floods many of us along the coastline had been expecting.

Most of the damage came in the form of the countless uprooted trees. Across the North around 50,000 homes lost power.

But as always, where there is great adversity, the farmers of Ulster show great ingenuity.

A friend spotted a farm in Co. Fermanagh where old tyres had been used to hold the shed’s roof down, while others spotted roofs tied down with silage bales.

Several of the main marts including Armoy, Downpatrick and Ballymena closed for the day.

Most of the special entries seem to have been postponed until next Monday’s sales, however, prospective bidders should contact their local mart for further confirmation.

Kilrea livestock market was one of the few which remained open. Its sheep sale finishes early on a Monday, so the sale was over before the storm reached Co. Derry.

For most, it was a case of bringing the cows in for the night, starting milking a little earlier, and keeping the generator handy in case of a power cut.

Ophelia strayed further west than expected, protecting much of the North from the ex-hurricane.

The official guidance is to wait until a storm is over to repair damage. But you’ll know yourself; farmers often don’t have the luxury of waiting around and many were out working with their animals despite the weather.

As with most storms, old buildings were the most vulnerable; and in the yard we are currently renting there are plenty of those around.

The roof started to come down in two areas, after two supporting beams gave way under the force of the wind.

Assessing the damage. On my farm in Greyabbey, Co. Down. The roof is coming down. pic.twitter.com/SSMH1PnlzI

We were lucky to catch it early, before any irreversible damage had been done. Some quick thinking from my dad, and sister, managed to save it from worsening as the evening progressed.

And thankfully, despite a few rattles in the night, the cows were safe and sound.

Many insurance companies will declare a storm to be an act of God, yet the damage is very physical for those who are left to pick up the pieces. This brings me to my point that more should be done to protect farmers caught up in natural phenomenons.

Damage caused by #Ophelia on a farm in Co.Down. pic.twitter.com/1dqVbb8dTF

Farmers in Co. Donegal, whom I recently visited, are still in talks to arrange an aid package for those caught up in the floods. Luckily, most escaped damage in this latest storm.

The truth is that there is no right way to deal with damage and each situation is very different.

It’s all very well saying that builders and surveyors should be brought in, but if you’ve ever tried to get a good builder, you’ll know how long that can take.

If you’ve 200 cows or sheep needing to sleep in a shed that night, of course you try your best to make-do and mend.

Although the same hard-line should always be to never put yourself or others at risk.

I know we got off lightly, but it makes me realise that much more support is needed for farmers – and not just from their neighbours.

After all, it doesn’t matter what the weather is or how much damage is done, the cows will need milked anyway.