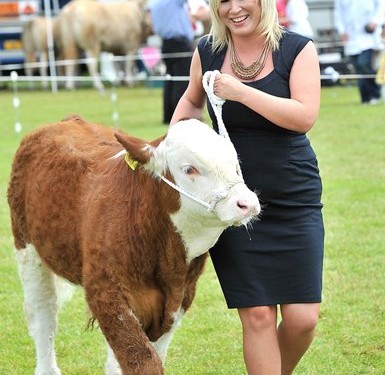 Michelle O'Neill at the Omagh Show.

Relaxation of brucellosis pre-movement testing controls for cattle movements within Northern Ireland, have been announced by the North’s Agriculture Minister Michelle O’Neill.

“From Monday, November 3, 2014, the age threshold at which cattle require a brucellosis pre-movement test will increase from 12 to 24 months and the window for a single movement will be extended from 30 to 60 days from the date of sampling, on receipt of a negative test result. This good news is a result of the excellent progress made in recent years to eradicate brucellosis. As at present, brucellosis pre-movement tests are valid for one move only, except for moves to shows,” Minister O’Neill said.

The proposed changes will apply to internal cattle movements within the north of Ireland. EU requirements relating to the export to other Member States continues to require a pre-movement test to be conducted on animals that are intended for breeding and production, and are aged 12 months and over, within 30 days of export. These requirements will also remain in place for the export of cattle for breeding and production to Britain.

“The last confirmed case of brucellosis was in February 2012 and, if we continue to remain brucellosis free for three years from that date, we will be in a position to make an application to the EU Commission in March 2015 for Officially Brucellosis Free (OBF) status. Achieving OBF status will greatly benefit all cattle farmers here as we will be able to implement progressive reduction of control measures such as routine testing and further relax pre-movement testing. Until that time, apart from pre-movement testing, all breeding cattle over a year old should continue to be presented for Brucellosis tests,” the Minister said.

She went on to say that the relaxation of our pre-movement testing rules from Monday 3 November 2014 is an early measure that can be taken forward to achieve a degree of deregulation and some cost reduction for farmers. “It also provides a positive signal that there are additional gains to be achieved by continuing to be brucellosis free.”

She also advised farmers to consider the health of the cattle population as a whole, through employing excellent biosecurity on their farms. She recommended that they enquire about the disease status, past and present, of herds that they are purchasing from, either in the north of Ireland or via imports.