Farmers in Northern Ireland were getting close on €100 more for 280kg R3 heifer carcasses than farmers down south during the week ending November 20.

Figures from the Livestock and Meat Commission show that Republic of Ireland origin heifers dropped by 1.3c/kg to 370.7c/kg during the week ending November 20, compared to the same week a month earlier.

Meanwhile, prices in Northern Ireland had reached 405.8c/kg, thanks to an increase of 27.9c/kg since the week ending October 23.

This meant there was a price difference of 35.1c/kg between the North and South during the week ending November 20.

The price increase enjoyed in Northern Ireland placed it 30.1c/kg above the EU average of 375.7c/kg at the end of the third week in November, compared to a difference of just 4.0c/kg in the week ending October 23.

The EU average price increased by 1.8c/kg compared to the corresponding week in October, leaving the Republic of Ireland beef price 5.0c/kg below the EU average. 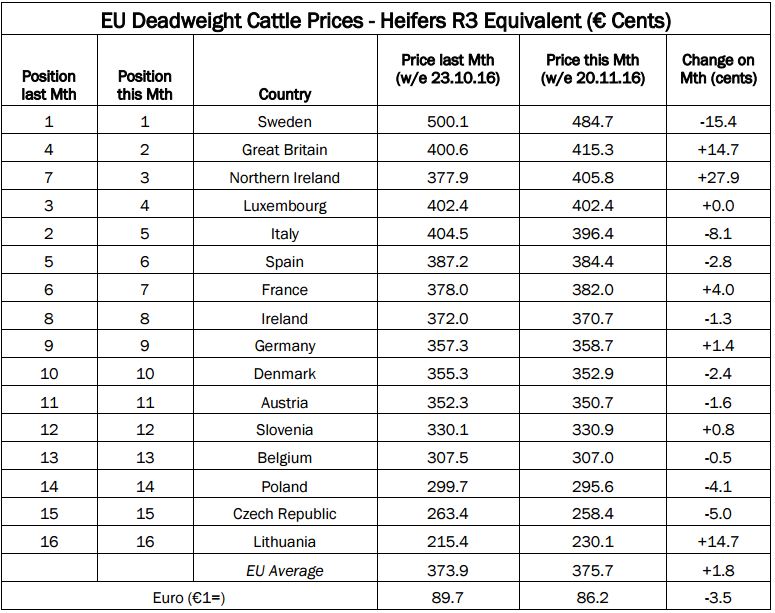 This meant that the price difference between the EU and Britain jumped to 39.6c/kg, compared to 26.7c/kg at the end of the third week in October.

British beef prices continue to dwarf those in the Republic of Ireland and Northern Ireland, with a price difference of €124.88 and €26.60 respectively on a 280kg R3 grade heifer carcass.

The Republic of Ireland remained in eight position in the EU Deadweight Cattle Prices league table at the end of the third week in November.

The bottom half of the table remains largely unchanged, with the biggest mover being Northern Ireland, who jumped from seventh to third thanks to a price increase of 27.9c/kg.

However, Sweden retains its position at the top of the league table despite reporting a fall in beef prices of 15.4c/kg, meaning that in the week ending November 20 farmers in Sweden received 69.4c/kg more than British farmers.