Non-stop rain till Sunday according to Met Eireann 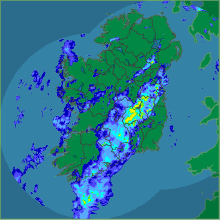 Met Eireann have this morning issued a weather warning for for southern and western coastal counties.

It says some intense rainfall will occur at times from Friday right through to Sunday night.

Saturday: Very windy with a mixture of sunny spells and heavy thundery downpours. Despite the wind very mild with maximum temperatures of 15 to 18 degrees.

Sunday: Showery rain will spread eastwards during Sunday morning in strong and blustery westerly winds. Becoming less mild, temperatures dropping by a couple of degrees, around 13 to 15 degrees. The showers less frequent Sunday night with good clear spells developing, but it will continue to remain windy.

Monday: Western counties will be showery, but the eastern half of the country will tend to be drier and brighter. Very blustery with strong westerly winds. Highs of 13 to 15 degrees. Heavy rain (possibly very heavy) will spread eastwards to all parts of the country overnight, clearing to showers before morning.

Tuesday: A much colder day with very strong northwesterly winds, possible gales. Heavy showers will affect more northern counties during the day, but the bulk of the country will be dry and bright most of the time. Highest temperatures of 9 to 12 degrees.

Wednesday: The occasional shower, but generally dry and bright. Less windy than Tuesday but with similar temperatures