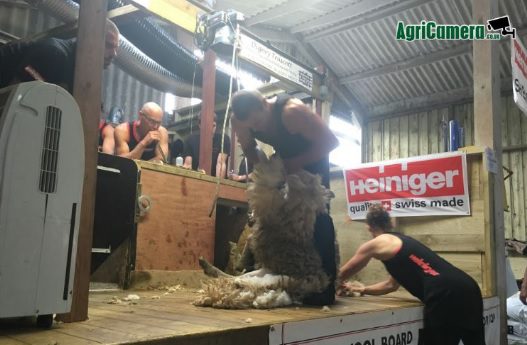 A new world record in sheep shearing has been set by Matt Smith of New Zealand after he sheared 731 sheep in nine hours.

Smith broke the previous nine-hour sheep shearing record of 721 which was set by Rodney Sutton in 2007.

Smith, who farms in Bodmin Moor in Cornwall, was the first to attempt such a feat in the Northern Hemisphere. He took on the challenge earlier today at Trefranck Farm where he was watched by an international audience via a live camera link.

At one point during the challenge, Smith managed to shear one sheep every 36 seconds – which was well ahead of the 45 second target.

Smith’s attempt at the record began early this morning at 5am and he went through five runs of sheep until 5pm this evening.

He got off to a good start on run one, beating Sutton’s previous record of 158 sheep after he sheared 164 in the first two hours of run one.

Smith previously set a world record for the most sheep sheared in eight hours by shearing 578 sheep in 2012 (which has since been broken).

Meanwhile, Irishman Ivan Scott will be hoping to set a new record for a similar event on Friday when he takes on the nine-hour lamb shearing challenge.

The Donegal man is no stranger to breaking records, after he beat the Guinness World Records title for the fastest time to shear a sheep, on the opening episode of Big Week on the Farm earlier this year.

He sheared the sheep in 37.9 seconds, taking 1.41 seconds off the existing record, live on air this year.