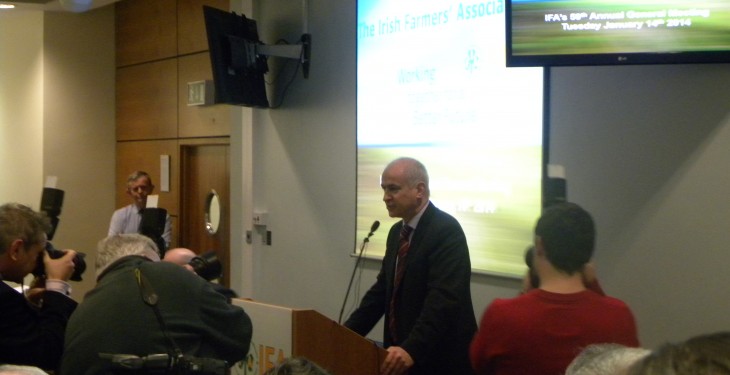 Improving farm incomes, a new Charter of Rights, key trade deals and action on the proposed farming tax relief review are key priorities for the newly elected IFA president Eddie Downey, who was speaking at his inaugural address to the 59th AGM of the Irish Farmers’ Association (IFA) in the Irish Farm Centre, Dublin this afternoon.

The IFA president said he hoped the new rural development programme (RDP) would be cleared at Cabinet this afternoon and he said he expected the details of Common Agricultural Policy (CAP) implementation to be announced by the Minister for Agriculture Simon Coveney at the AGM later this evening.

Downey stressed that the new RDP should provide the resources for a strong disadvantaged areas scheme, an agri-environment scheme for 50,000 farmers and farm investment across all sectors.

Addressing the AGM, Downey said: “My message today to Government, processors and retailers is: farmers must be properly and fairly rewarded for the job they do in producing high-quality food. Prices must reflect the cost of production and deliver a fair margin to reward hard work and investment.”

He said: “Farmers are being squeezed by high input costs. Since 2005, the cost of fertiliser is up by 62 per cent and energy by 36 per cent. Some of these increases are the result of over-concentration of market power in certain sectors. The EU must take steps to tackle the international price cartels openly operating in the fertiliser and energy sectors.”

The new IFA president said he was determined to change the approach to farm inspections, which has led to fear and stress on farm families. “I am demanding a new Charter of Farmers’ Rights that does away with the ‘Big Brother’ mentality and treats all farmers with respect. This means realistic notice of farm inspections, a yellow-card system and proper tolerances for minor infringements.”

On trade deals, Downey said Irish farmers reject the way the European Commission is using agriculture as its main bargaining chip in bilateral trade negotiations. He said any deal with the US on the same basis as the recent Canadian trade deal would have a devastating impact on our livestock sector and cannot be allowed.

Downey warned the EU Commission that they are taking unacceptable risks by importing products that come nowhere near to meeting EU standards. “European producers and consumers will not accept food imports from countries where the use of hormones in beef, BST growth promoters in milk and beta-agonist drugs such as ractopamine in cattle and pigs – all banned in Europe – is common practice.”

The IFA president will also be demanding strict equivalence of standards on the critical issues of food safety, traceability, environmental protection and animal welfare.

Downey also announced the establishment of a Farm Taxation Project Team to defend the interests of farmers in the upcoming review of tax reliefs announced by the Minister for Finance Michael Noonan in the last Budget. He said IFA has three priorities: to maintain existing reliefs; to secure new incentives to drive land mobility and investment; and to examine how the taxation system can better accommodate the extreme volatility in farm incomes.