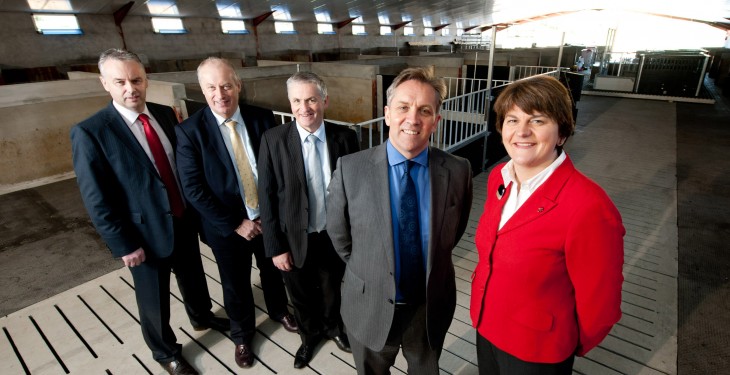 Sainsbury’s CEO Justin King has visited the former pig testing station for Northern Ireland to gauge plans for an innovative pig welfare research programme that has been earmarked for the Antrim site.

The project will be co-funded by Sainsbury’s, Dunbia and M Keys Farms. King was accompanied by Enterprise Minister Arlene Foster, Malcolm Keys and Dunbia directors Jack & Jim Dobson. Sainsbury’s has allocated a £2.4 million sterling budget for a number of agri-related research and development projects, courtesy of its Agriculture Research and Development Grant, which will be rolled out over the next couple of years

AgriLand has been informed that the research work at Antrim will focus on the development of a pig innovation centre. The new resource will be used to develop management systems, which will deliver the highest standards of pig welfare yet to be achieved on UK farms.

Sainsbury’s commitment to invest is directly linked to the company’s target of doubling the amount of food it procures from British suppliers between now and 2020. Speaking at last Thursday evening’s Northern Ireland Food and Drink Association annual dinner King confirmed that the food retailer fully recognised that it had a key role to play in funding the research and development that will be required to make all of this happen at farm level.

He added: “The development of a sustainable agri-food chain throughout the UK is crucially important. Our customers regard quality as an important factor when it comes to determining which products they actually buy.

“They are extremely interested in the provenance of the foods they are purchasing. And ensuring that the highest possible welfare standards are achieved on farm is an integral part of this.”

Sainsbury’s currently procures £250m sterling of food products each year from 180 suppliers in Northern Ireland. Of this, £40m sterling is retailed locally with the rest distributed to the supermarket’s 1,000 store outlets throughout the UK. Sainsbury’s 2020 commitments holds out the hope that its procurement levels in Northern Ireland could rise to £.5n sterling annually by the end of this decade.

Courtesy of his speech to the NIFDA  dinner, the organisation’s chairman Tony O’Neill stressed the importance of developing a sustainable agri-food supply chain in Northern Ireland.

He added: “Northern Ireland is on track to deliver on the ambitious targets set for its agri-food industry but succession is key to success.”

Applauding the industry on achieving 30 per cent turnover growth (2008-2012) the NIFDA chairman added: “I believe this robust performance throughout the Recession demonstrates the capability of agri-food to outperform other sectors and to achieve our target of almost £7.5bn sterling turnover by 2020.”

Pictured: Sainsbury’s Chief Executive Justin King was in Northern Ireland with Enterprise Minister Arlene Foster to get a first glimpse of a new Pig Innovation Centre in Antrim.