Macra na Ferime has launched the Young Farmer Skillnet, which is an informal training programme available to young farmers.

It will deliver the training and skills that young farmers decide they need themselves at a time that suits them, Macra President Sean Finan said at the launch.

He said farmers pick the modules and Macra na Feirme Young Farmer Skillnet will deliver the required training. All the training is focused upon delivering an outcome for the farmer, he said.

Macra research found that young farmers have a relatively high level of formal agricultural training, however the level of engagement in further training is quite low.

Macra research also found that a lack of awareness of training also leads to an inadequate understanding of the benefits of training for young farmers.

According to Sean Finan, young farmers that have finished the green cert and who have farmed for a year or two often realise that they need up-skilling in a particular area but sometimes find it difficult to identify a course that fulfils their needs.

We have a new CAP that, for the first time, has mandatory young farmer measures, while milk quotas have been abolished and we have a new Foodwise 2025 report, he said.

“The Macra na Feirme Young Farmer Skillnet will play its part in providing young farmers with the skills to embrace all these exciting developments, produce more, be more efficient, be the best at what we do and at the same time make a living,” Sean Finan said.

Some of the courses on offer as part of the programme include business, technical and personal modules. 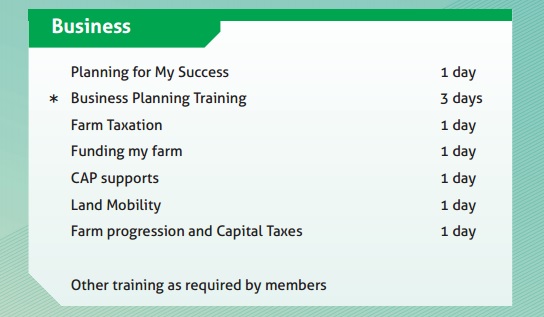