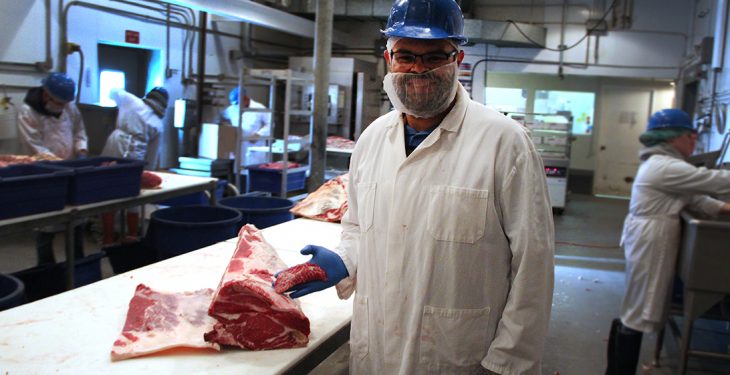 Like a diamond in the rough, a small cut of beef that meat cutters throw in with ground meat is now being looked at as a high-end delicacy by researchers at the University of Nevada, Reno.

It says the small, quarter-moon-shaped slice of beef has a taste and tenderness that outclasses any other cut except filet mignon.

Assistant professor of meat science and food safety Amilton de Mello, who has redeveloped the use for the piece of meat, talked about the science behind the cut, its ease of trimming and profitability for the meat processing industry, as well as the potential for restaurants to offer it as a premier menu item.

The Bonanza Cut is juicy, extremely tender and very marbled. The petite slice of beef is ideal for grilling and practically melts in your mouth.

“Chefs and restaurants will love this cut, it can be portioned for many sizes of servings,” de Mello, from the College of Agriculture, Biotechnology and Natural Resources and the University of Nevada Cooperative Extension, said. “And for meat producers, it offers a higher price point and more profits by taking this cut in a new direction.”

Consumers won’t find the Bonanza Cut in the meat department or restaurants yet. It will be up to the meat producers, such as JBS who funded de Mello’s research, to make the cut available.

De Mello started developing this new cut in 2014 while working for the beef industry. With support from JBS, a world leader in processing of beef products, he conducted research on the cut at the University beginning in 2015 and found it compared extremely well against other cuts of beef.

The objective of the experiment was to evaluate tenderness and cooking yields of the m. infraspinatus caudal tip (the very far end of the flat iron steak) and verify the opportunity of exploring this cut as an added-value product. Research found that the Bonanza Cut has superior marbling and higher fat content compared to other meat cuts, including the flat iron steak.

“Meat processors will like this specialty cut for a number of reasons, one because it’s very easy to trim,” de Mello said. “When you separate the chuck and the ribs, the Flat Iron steak goes one way – with the Chuck – and the relatively small end stays with the rib side; this is the Bonanza Cut.

“The industry will also like it because instead of selling it for $1 a pound as lower quality meat, they can showcase it for what it is, a premium cut worth more like $5 a pound.”

The small cut yields two pieces per beef carcass that combined weigh about a half of a pound. By angling the cut when breaking the ribs, meat cutters will gain more volume for the Bonanza Cut.

“This small volume makes this cut even more special based on its high quality and low availability,” de Mello said. “Due to its eating characteristics and unique texture, The Bonanza Cut is a new alternative to replace traditional beef cuts in many different recipes.”