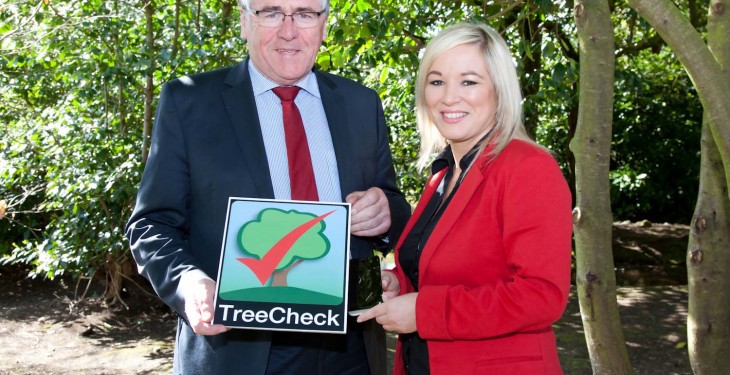 Treecheck, a smartphone app to enlist the public’s help in safeguarding tree and forest health on the island of Ireland, was recently launched by Minister of State Tom Hayes and the Minister for Agriculture in the North Michelle O’Neill.

Minister Hayes said that outbreaks of Chalara Ash Dieback and Phytophthora ramorum in larch on the island have brought into sharp focus the threat posed by the introduction and spread of serious pests and diseases to our trees and forests.

“Increased movement of plants and plant products in global trade and changing weather patterns will only serve to heighten these risks, and it is essential that we all play our part in protecting the economy and the environment,” he said.

Minister O’Neill said that the development of Treecheck has been made possible through effective and innovative co-operation between officials in both Departments of Agriculture who have developed, refined and tested the application on an all island basis, with the co-operation of the Forestry Commission.

“This development will enhance the ability of tree and forest owners and the public to accurately report suspect tree diseases and pests, and enable more effective follow up by Departmental Inspectors,” she said.

The new app will allow members of the public across the island to use their smartphones to report details and send photographs of suspect diseased trees or evidence of insect damage to the two Departments for investigation, DARD said.

It said by using any GPS enabled smartphone, the location of the suspect tree may also be captured by the app to allow inspection if required.

Once received, the suspected diseased tree reports will be assessed by plant health officials and will be followed up if a serious pest or disease is suspected. The app will help in the early detection of new and existing harmful pests and diseases, DARD said.