Multi-species: Findings from the SmartGrass Project

With the increasing pressure to reduce the level of applied nitrogen (N) on farms, the industry – and farmers – are feeling the need to diversify away from the usual perennial ryegrass (PRG), an N hungry species and into other areas, such as multi-species swards.

The SmartGrass Project was developed to conduct research on these swards.

This week, during BioFarm 2019, Dr. Helen Sheridan – assistant professor at University College Dublin (UCD) School of Agriculture and Food Science – presented some results from the project.

Kicking off her presentation, she said: “PRG dominates the recommended species list; it accounts for 95% of sales. There are very good reasons for this; but it has a high requirement for N.

Therefore, we began looking into the past and how they managed before fertiliser was so readily available.

They found that – compared to monocultures – by mixing species, the different species can extract different nutrients from different levels of the soil profile – due to their different traits and root depths; whereas one species would just have the same root depth and height.

This lead to a diversity effect or an added yield – over what they expect those species to yield if all their yields were added together.

The study began in 2013 with plot experiments – under non-grazing conditions – to discover what the best species mix was. 112 small plots were developed which comprised of one to three plant functional groups.

These included: only grasses; grasses and legumes; grasses, legumes and herbs.

Other conditions of the study:

The control was a PRG grown at 250kg of N/ha/year. It got urea at the start of the year and calcium ammonium nitrate (CAN) later on in the season.

The legend on the right (which can be seen in the image below) is the proportion/percentage of grass, legume and herb in the mix – in that order.

The horizontal axis is the dry matter production (kg DM/ha) and the vertical axis was the amount of N (kg N/ha/year) applied over the year.

Commenting on the results, Helen said: “In the spring, a number of our mixes compared really favorably at 0kg of N/ha/yr compared to the PRG at 250kg of N/ha/year. This is because of the legume component.”

The broken dotted line represents the PRG at 250kg of N/ha/year. 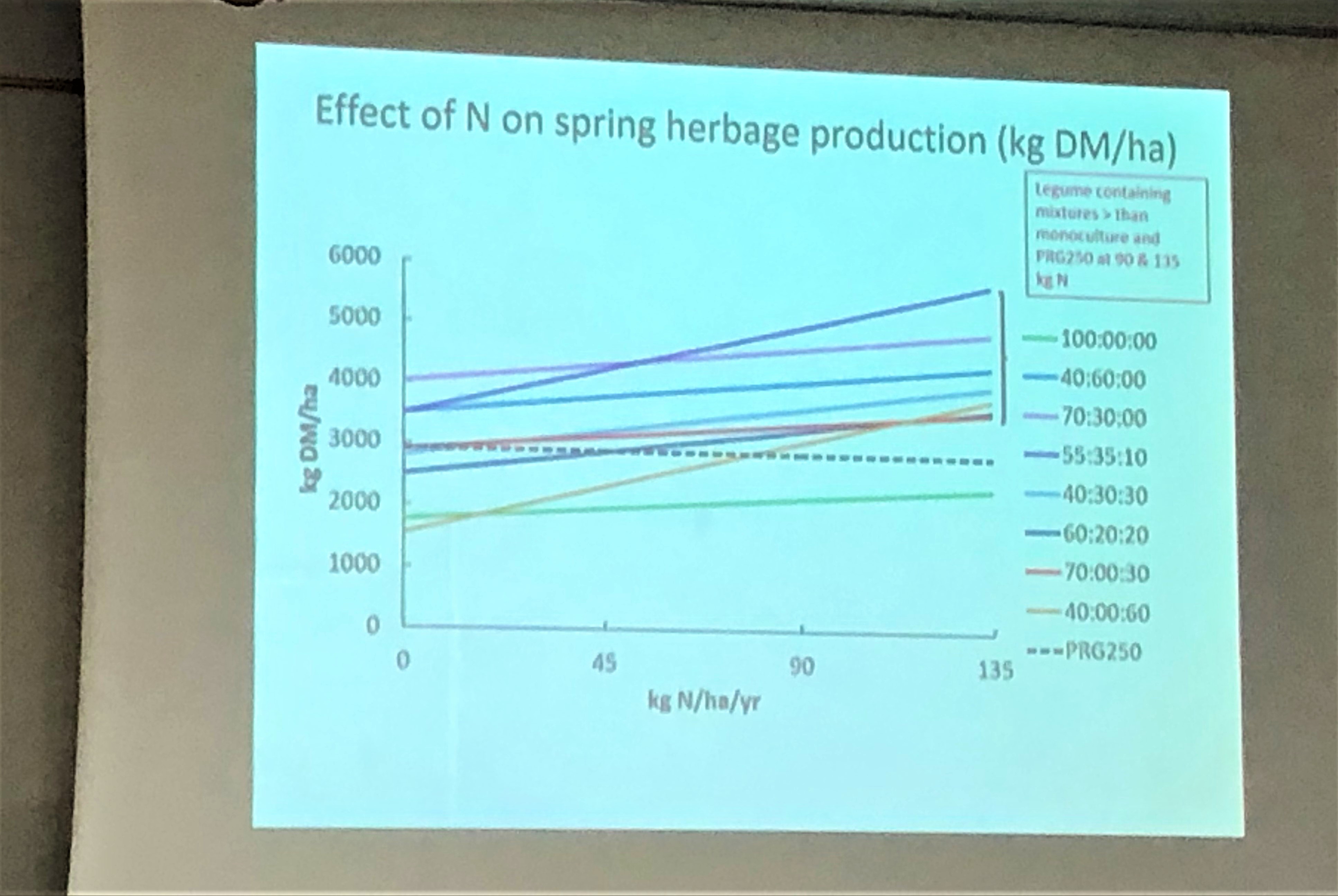 However, at above 90kg of N/ha/year, most of them out-yielded the high-input ryegrass.

The 100% grass mix was the only one which did not out-yield the PRG at any of the N input levels.

Meanwhile, when we look at summer production, the ryegrass comes into its own and outperformed all except for the 60% legume mix. Helen noted that this type of mix is not usually one which people would adopt.

Continuing, she said: “Then, in the autumn, we got some really nice results. In this case a number of the mixes out-yielded the ryegrass into the autumn.” 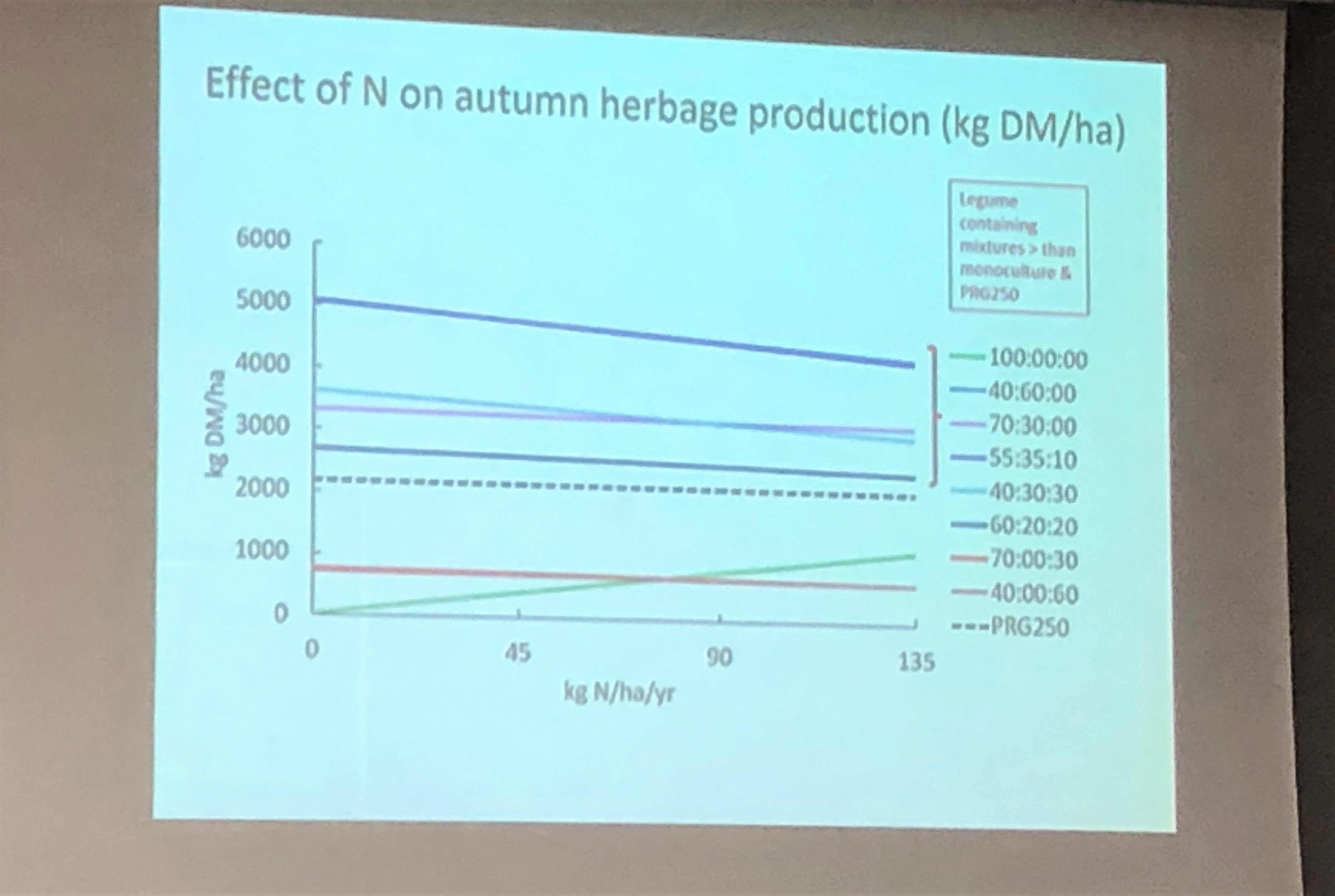 From examining the results, the 55% grass, 35% legume and 10% herb performed the best – in both the spring and the autumn.

When they looked at the stability of the dry matter yield over time, up until 2016, the PRG sward remained stable, but in 2016 it dropped significantly from 11t DM/ha to 9t DM/ha; while the mixtures remained stable and some even increased over time.

Similarly, Helen also noted, that this happened at 55% grass, 35% legume and 10% herb, but in this case there was a positive yield response.

Once the most suitable mixes were found, they began to experiment under grazing conditions – in UCD Lyons farm.

The experiment started at turnout (post lambing) and continued until all lambs reached slaughter weight and the ewes were housed in early December 2015 and late November 2016.

In the lambs that grazed the six-species mix, they found:

The next phase of this research, Helen explained, was to create “a more long-term picture of what is happening” which she feels is needed for this research.

And so, a new low-input, high-output calf-to-beef system is to be developed on UCD Lyons Farm, next year, where they will graze multi-species swards.