Video: Four hedgecutters that would stand out on any farm 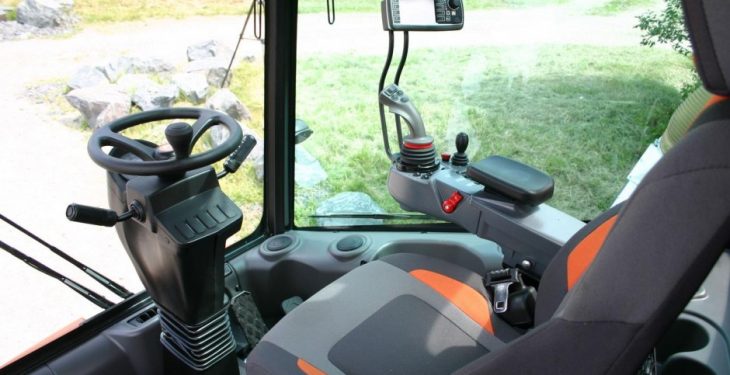 At the controls of a Noremat VSV.

Hedgecutting is not always the most comfortable of tasks. Too often, the tractor’s cab pillars are in just the wrong place, making it hard to see the flail head. Contractors and operators might well yearn for a ‘bells and whistles’ self-propelled machine, if money was no object.

Cue the Noremat VSV; a striking machine that might just be a show-stopper.

The cab, arm and engine are positioned to provide the right balance between stability and visibility. The 4-cylinder Perkins engine sits directly across from the flail head (or other attachment) to act as a ballast, without adding unnecessary weight.

The main pivot for the arm/boom is located between the two axles. Stability is improved further by placing each of the four equal-size wheels at the extreme corners of the machine.

The machine has enough capacity to drive multiple attachments; typically a boom-mounted flail head on one side and another at the front.

Yet another self-propelled option is Spearhead’s (Energreen’s) Twiga SPV 2. Its key feature is a rotating cab, which allows 90 degrees of rotation from transport to work position.

Spearhead also offers SPV 3 and SPV Trax variants, offering greater reach and, in the case of the latter, a tracked undercarriage.

Not be outdone, machinery giant Claas has kitted out one of its Xerions with a plethora of booms/arms to create a hedgecutter of truly monstrous proportions. Affectionately named the Octopus, one can only marvel at the operator’s dexterity.

If the budget is more modest, you might consider mounting an off-the-shelf hedge-cutter on a second-hand self-propelled power unit. The video below shows an Irish designed and built Arbo-Cut 2000, which has been grafted onto an old John Deere 5830 forage harvester. The 5830 was a reasonably popular forager here in Ireland back in the 1980s and 1990s. It was affectionately known as the ‘coffin box’, due to the auger-box (running underneath the cab) ‘occasionally’ jamming up with grass.

While the outfit below might be overkill in terms of horsepower (and possibly fuel consumption), the high driving position certainly does provide a commanding view.