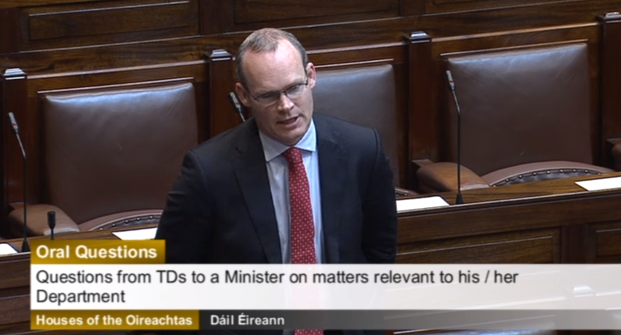 Beef processors do not have access to the Departments database of animal registrations or at least they’re not supposed to according to the Minister for Agriculture Simon Coveney.

The Minister was questioned on the issue in the Dail yesterday (Tuesday) by Independent Deputy Mick Wallace. When asking the Minister as to whether the factories have access to the database, Wallace said “If so, it explains how easy it is for them to manipulate the market price. Sometimes that gives them too much information and they are able to take advantage of  beef farmers, knowing when the heifers were born and how many are coming to the 30 month point.”

Minister Coveney responded: “That is if they get the information. They are not supposed to.”

He also added that none of this should happen because factories do not have access to the database. “If they get access to it they are doing so in ways that they should not, whether from a vet in the factory, or whatever. Factories should not have access to a database that gives them information about the numbers of animals that farmers in their region have to sell, and so on.

“We have put systems in place to make sure they do not get access to that information. I have heard that accusation on a number of occasions over the past six months.

“We have checked it out in some detail. We are ensuring the broader database to which the Department must have access, relating to animal movements and numbers, etc., is not handed over. Factories are not entitled to this commercially-sensitive information.”