Minister for Agriculture Michael Creed is to be invited to appear before the Oireachtas Joint Committee on Agriculture to explain payment delays in the GLAS scheme, according to Fianna Fail agriculture spokesperson Charlie McConalogue.

The latest figures suggest that around 7,800 farmers are still waiting on advance payments, almost two months after they were due, the TD said.

Deputy McConalogue commented on the issue, stating: “For the second year in a row we have farmers facing serious cash flow problems as a result of the minister’s and the department’s failure to roll-out these advance payments on time.

“Unfortunately, the lessons of last year have been ignored and now we have a case of history repeating itself and farmers are once again waiting months for payments that were due to be paid out before the end of last year.

“Minister Creed is completely out of touch with the challenges facing small family farmers.

GLAS payments average around €4,000 – that’s a substantial amount of money, which is usually budgeted for.

The agriculture spokesperson for Fianna Fail said that farmers are left with serious cash flow problems when payments aren’t made on time.

“How can the minister stand over this dysfunction for another year? These ongoing delays are a clear breach of the Farmers’ Charter Payment, which was agreed between the department and farming organisations up to 2020.”

The deputy pointed out that, under the Farmers’ Charter, it was agreed that up to 75% of GLAS payments would commence during the third week of October, with the balancing payment issued in mid-December.

“Despite this, there are thousands of farmers across the country who are still waiting for these payments at the end of January,” McConalogue said.

I want Minister Creed to explain to the members of the Oireachtas Agriculture Committee the reason for these continued delays and what mechanisms are being put in place to ensure prompt payment.

“This deliberate breach of the charter cannot be defended – it’s an insult to hardworking farmers and displays an arrogance on the part of government. These payments need to be made now,” McConalogue said. 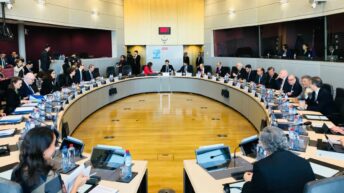