Milk quotas come to an end after 31 years

Tuesday, March 31, was the last day of the milk quota regime.

Introduced in 1984 as a temporary measure to address a structural oversupply on the EU market that had led to the infamous ‘milk lakes’ and ‘butter mountains’ the regime is now 31 years old.

The EU Member States and the European Commission decided in 2003 that quotas would not be prolonged beyond 2015, and since then transitional steps to provide a ‘soft landing’ were put in place, such as a gradual increase of national quotas.

Now, with the global demand expected to increase by an average of 2.1% a year, stakeholders in the dairy industry hope the end of quotas means that EU farmers will be able to fully benefit from this growth, especially for added-value products like cheese.

Commissioner for Agriculture and Rural Development, Phil Hogan, said that the end of the era of milk quotas represents the closing of a chapter in the history of the European – and indeed global – dairy sector.

“It represents the opening of a new chapter – a new era without production constraints.”

“Several support measures remain in place for milk producers: from direct payments and voluntary coupled support to investments through rural development programmes or even public intervention and private storage if need be,” he said.

Irish dairy farmers were recently questioned by Teagasc about their production plans from the point of quota elimination in 2015 through to the end of 2017.

The aggregated results show that almost two-thirds of dairy farmers, or 11,000 farmers, plan to expand milk production in the 2015 to 2017 period. 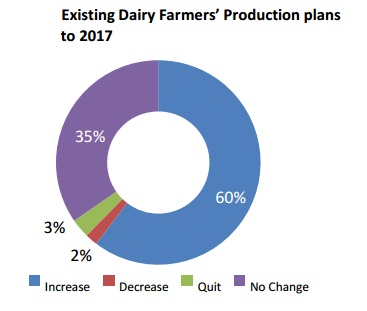 A further one-third of farmers plan to maintain their current production level, while a small proportion, 5 percent, plan to either decrease or exit milk production. The average current herd size of those planning to increase production is 79 cows, which is above the national average herd size of 66 cows.

While those planning no change in production have an average herd size of 51 cows at present.

Irish dairy farmers are facing an €80m superlevy bill, according to the Minister for Agriculture, Food and the Marine Simon Coveney who released figures showing that the country was over quota by 5.07% at the end of February.

The Minister said that Ireland is an estimated 5.07% over quota, when account is taken of the butterfat content of the milk deliveries.

“While this figure continues a downward trend in the over-quota position, coming down from 7.15% in October, indications are that Ireland will still end the milk quota year in the region of 5% over quota which equates to a superlevy bill of about €80m.”

Milk Quotas End: The Battle Is Won, But The War Continues

10 Things You Need To Know About Milk Quota Abolition

Milk Quotas To End Within Days, But Why Were They Introduced?