Milk production per cow reaches record levels in the US

The level of milk production per cow in the 23 major states in the US reached record levels in June, the latest figures released by the US Department of Agriculture (USDA) show.

During the sixth month of this year, milk production in the 23 major states totalled 16.9 billion pounds; this was an increase of 1.7% compared to the same month last year.

Production figures for May were revised to 17.8 billion pounds, up 1.9% year-on-year, the USDA confirmed.

The May revision represented an increase of 17 million pounds, or a marginal rise of 0.1%, from last month’s preliminary production estimate, it added. 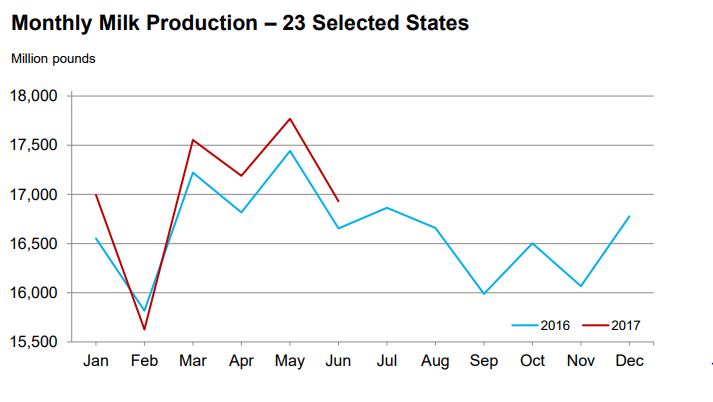 Meanwhile, production per cow in the 23 major states averaged 1,939lb for June; this was 13lb above figures from June 2016.

This is the highest production per cow for the month of June since the 23 state series began in 2003, the USDA confirmed.

Across the entire US, milk production during the second quarter of this year (April to June) was up 1.8% – totalling 55.3 billion pounds – when compared to the same period last year.

The average number of dairy cows in the US during the second quarter of 2017 was 9.40 million head.

This represented an increase of 29,000 head on the first quarter of this year (January to March) and 76,000 head more than the second quarter of 2016, according to the USDA.

This follows on from two consecutive decreases of 0.4% on July 4 and 0.8% on June 20 respectively.

The price index for butter continued its upward trajectory at the latest GDT auction, registering an increase of 3.4%. This was the largest price difference recorded at the event.

No butter milk powder (BMP) was offered at the auction. Cheddar’s price index increased by 1.6%.

Meanwhile, the price index for skimmed milk powder (SMP) fell by 3.2%; an increase of 0.3% was reported for the whole milk powder (WMP) index.

Is it possible to run a profitable dairy business on leased land?