Domestic milk intake by creameries and pasteurisers was estimated at 349.7m litres for November 2016, the latest figures from the Central Statistics Office (CSO) show.

This was 0.5% above the corresponding milk production figure last year.

Comparing the November 2016 milk production figures with those for November 2015 shows that total milk sold for human consumption increased by 5% to 43.8m litres.

Meanwhile the figures show that butter production was down 0.4% to 12,490t. 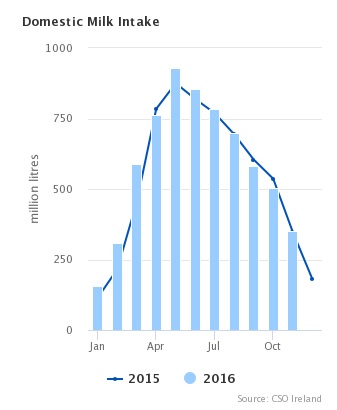 Skimmed milk powder (SMP) volumes will finish the year ahead of last year’s total of 99,100t with the latest figures showing that 109,800t of product has been produced as of October.

The SMP production figures for November are ‘confidential’, according to the CSO.

Meanwhile, with co-op boards beginning to sit down this week to set a price for December supplies of milk,  ICMSA is encouraging boards to consider what the market is returning.

“There are a lot of positive realities in the market place at the moment with fairly strong returns.

“We’re encouraging boards to consider what the market is returning and maximise the price paid to the primary producer, many of whom are still trying to clear debt.”

Comer said that looking forward he expects the market to return 33/34c/L at most.

Also speaking on milk price this week was IFA’s National Dairy Committee Chairman Sean O’Leary, who said a minimum price of 30c/L plus VAT would be fully justified on December milk.

This is with a view to reaching at least 33c/L before peak, he said.