Irish R3 heifer prices have risen to be 2.2c/kg higher than the EU average, after a period of being below the average, figures from the Livestock and Meat Commission (LMC) show.

During the week ending December 31, the Irish R3 heifer price stood at 381.9c/kg, an increase of 8.1c/kg on the beginning of the month, while the EU average R3 heifer price was 379.7c/kg

This placed the Irish price 2.2c/kg above the EU average and 34.9c/kg lower than the equivalent price in Northern Ireland, it shows.

On a 280kg R3 heifer carcass, this puts the price difference between Irish and Northern Irish heifers at almost €98 in favour of farmers operating North of the border.

Figures from the LMC also show that Swedish farmers continued to receive the highest price for R3 heifers, with a price of 469.2c/kg, while Britain retained second place with an equivalent R3 heifer price of 424.5c/kg.

Looking at the British price, this was a 1.6c/kg decrease from the 426.1c/kg paid to farmers at the beginning of the month,  leading to a narrowing between the British and EU average price. 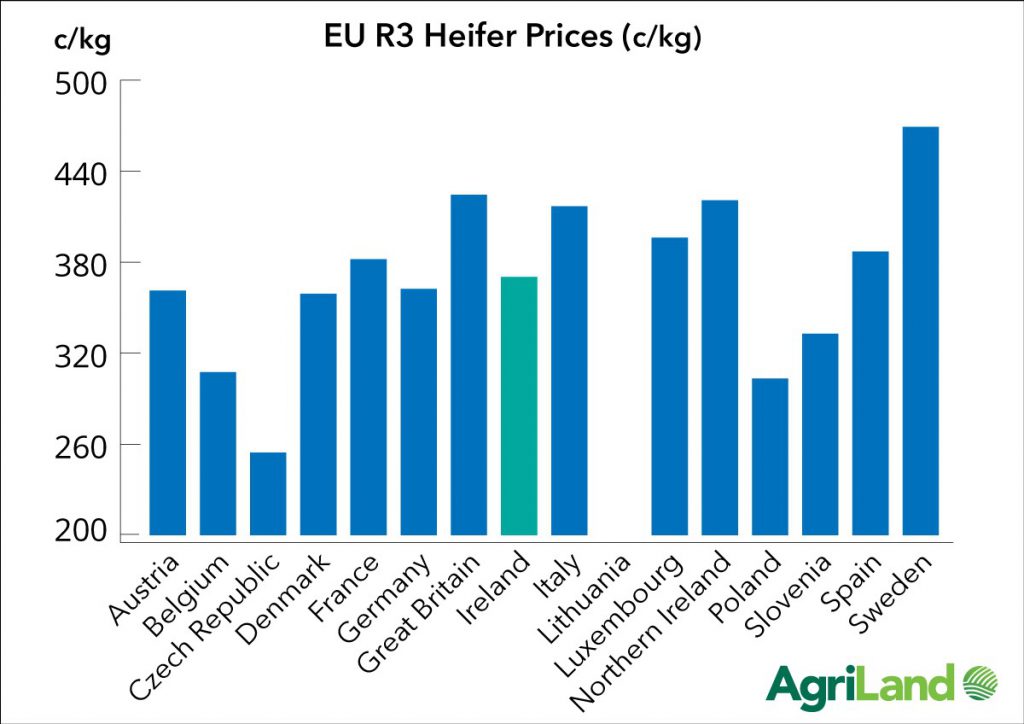 Figures sourced from the LMC. *Lithuanian price unavailable this week.

A somewhat stronger cattle trade has seen the beef price offered to farmers, for both steers and heifers, rise by 5-10c/kg this week.

Most procurement managers are beginning negotiations with farmers at 375c/kg for steers and 385c/kg for heifers – a rise of about 5c/kg on last week.

In addition, some factories are willing to pay an extra 5c/kg on top of the base price to secure numbers, bringing the respective steer and heifer price (excluding Bord Bia QA payments) to 380c/kg and 390c/kg.

There has also been a slight improvement in R grade cow prices with most factories quoting 320-330c/kg for these animals, while the P and O grade price is sitting at 280-290c/kg and 290-300c/kg respectively.