It’s now obvious that taxpayers across Europe – including those in the UK – want to see a farming industry that is more upfront in the way it tackles environmental issues. Greening, in my opinion, is the thin end of the wedge in this regard.

A quick perusal of Phil Hogan’s recently-published CAP White Paper gives a strong sense of what’s coming down the track – where conservation is concerned.

And for farmers in Northern Ireland there is already plenty of available evidence to the effect that London wants to see environmental protection put at the very heart of farm policy moving forward.

Given this backdrop, the Ulster Farmers’ Union must be commended for the decision taken to put the challenge of the environment at the very heart of the discussions held at its recent series of roadshow events.

I chaired the Co. Derry meeting, held in Limavady, and felt that the input made by Patrick Casement, from Northern Ireland Environment Link, and Jennifer Fulton, from the Ulster Wildlife Trust, was particularly positive.

‘Custodians of the countryside’

However, union president Barclay Bell put his finger on the very nub of the matter when he said that farmers can’t go green if their businesses are perpetually in the red – and he’s absolutely right.

Taxpayers must recognise the fact that farmers can be both food producers and custodians of the countryside.

It’s not possible to have one without the other. Thankfully, this is a principle that seems to have been accepted by Department of Agriculture, Food and Rural Affairs (DEFRA) Secretary of State Michael Gove.

Courtesy of his speech to the recent Oxford Farming Conference, he made it very clear that producing food of the highest quality must remain the number one priority for farming in the UK.

‘Farmers must be paid realistic prices’

It is often forgotten that the countryside, which we all enjoy today, has been created by generations of farmers, stretching back over many years. Adding to this good news story for consumers is the fact that food has never been cheaper.

But this scenario cannot last forever; farmers must be paid realistic prices for the food they produce and the investment they make on a daily basis to maintain a countryside that fully reflects the wonders of the natural world.

Nothing in life comes for free. As farmers look to the future they know they must face up to the challenge of diminishing support budgets and ever-increasing bureaucracy.

So, rather than continually campaign for a greener agriculture full stop, why don’t non-governmental organisations (NGOs) start actively campaigning to have the sustainability of production agriculture future- proofed?

In my opinion, this is the only fail-safe way to have the true beauty of our countryside maintained for the benefit of future generations. 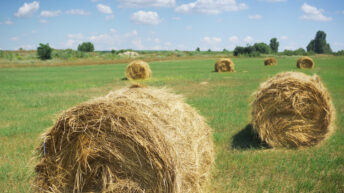