Meet three of the Rose of Tralee Escorts with road frontage

The 2016 Rose of Tralee International Festival is taking place this week in Co. Kerry and tonight, the 58th Rose of Tralee will be crowned in the Dome.

While the focus will be on the 32 Roses tonight, Agriland caught up with three of the Rose Escorts at this year’s festival who are all farmers.

Evan Kelly is one of the 32 escorts at this year’s Rose of Tralee Festival and he works for a for a local agricultural contractor in Edenderry, Co. Offaly.

Kelly also helps to run the 210ac family farm, farming a mixture of sheep, beef and some tillage.

Despite being young and single, the Offaly man says finding a girl to settle down with is the furthest thing from his mind, with his future travelling plans disrupting any chances of a blossoming romance.

“To be honest I haven’t got a girlfriend, and that sort of thing isn’t even on my mind going down to Tralee.”

I’m going to New Zealand with one of the lads and I don’t particularly want to be skyping someone on the other side of the world while I’m there.

Hoping the festival will broaden his horizons after just finishing college, the 22-year-old student, from Edenderry, decided to apply to become a Rose Escort rather than going on a typical holiday.

“I finished college this year and was thinking to myself about what I’d do this summer and this looked like the perfect opportunity to do something different rather than just going on a holiday.

“I was lying in bed one night and I seen that the deadline for applications was closing the next day so I said there and then I’d go for it,” Kelly said. 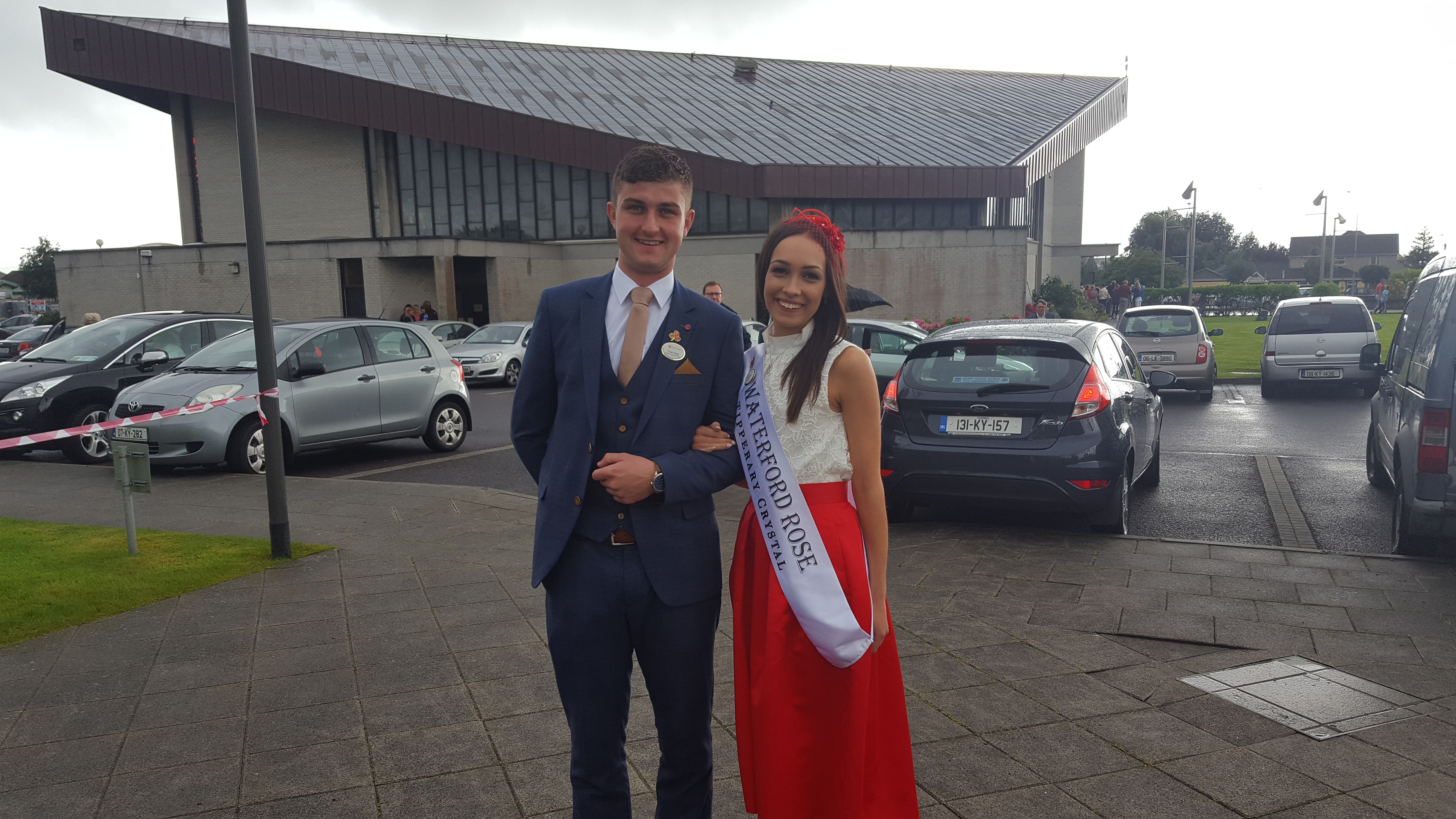 Evan Kelly with the Waterford Rose

His cousin was a Rose Escort a few years ago so the Rose of Tralee was always a hot topic of conversation in the Kelly household.

I’m really looking forward to Tralee, I like the idea of getting out of the dirty clothes and getting all dressed up for a change.

“The contractor I work for at home has been very good to me, the weather is fine at the moment and with me heading to Tralee it’s probably not suiting him very well at the moment.

“Some lads might be taking it easy once the festival ends, maybe even going on a holiday or taking a few days off, unfortunately I don’t have that luxury.

“Once the festival is over and as some as I’m fit to drive I’ll be in the car heading for home to continue with the harvest or go baling depending on the weather. But look I enjoy what I do, the man I work for has the finest of machinery, I don’t really consider it work,” Kelly said.

Kelly has just finished a three-year Rural Enterprise and Agri-Business degree, but he has planned to travel to New Zealand in October to go working with an agricultural contractor.

“I have work guaranteed until the end of March or early April depending on the weather and then I hope to a bit of travelling, maybe come home via Dubai or something,” Kelly said.

Meanwhile, Galway man John Finnerty is another successful applicant to become a Rose Escort for 2016.

The second year student of Agri-Business in Mountbellew Agricultural College and GMIT, farms close to 150ac alongside his father, with around 40 suckler cows and 80 ewes and some horses.

The 23-year-old from Ahascragh Co. Galway was encouraged to apply along with a friend by the local drama group.

“It started off as a joke really, I was involved in the local drama group helping out with a play and a couple of the women said myself and my friend Simon would make great escorts,” Finnerty said.

We were in the local pub and they kept at us to do it, they had looked up the forms and everything and said we still had time to apply, so finally around 2am we gave in and said we would apply.

It was a case of ‘if you do it, I’ll do it’. So the next day we both applied and before we knew it we were both through to the first round of interviews and the idea kind of grew legs from there really and truly.

Finnerty is hoping the festival will be an experience he’ll remember for the rest of his life and that he’ll make a some new friends along the way, but his mind is focused on the job at hand. 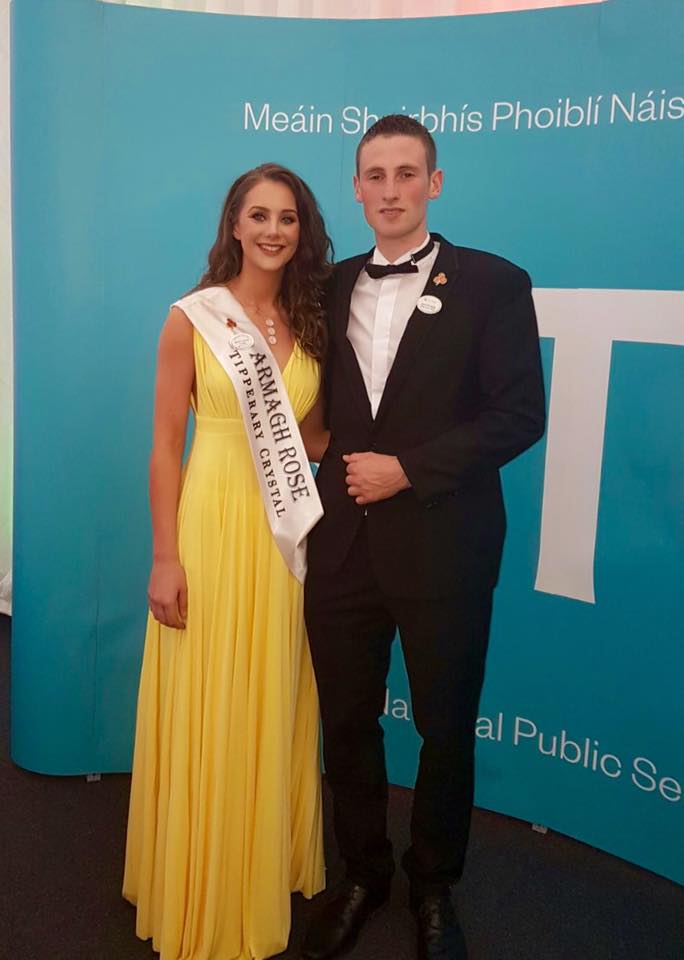 “I have no woman on the go, but first and foremost we’re escorts. As we’ve been told it’s the Rose of Tralee Festival, not the Escort of Tralee Festival. We’re down there to do a job and help the roses as best we can,” Finnerty said.

Applying to become an Escort at the Rose of Tralee is an idea most lads wouldn’t even consider said Finnerty, but he could not recommend the experience highly enough.

“I’m really looking forward to the week ahead. The experience has been way above my expectations already and we haven’t even made it down to Tralee yet. It’s definitely something I would advise any lad to do, it’s just well worth the effort,” Finnerty said.

With all of the family travelling to Tralee for a few days to enjoy the festival, some neighbours will be left to mind the Finnerty farm just outside the village of Ahascragh.

Really we have everything more or less done. The silage is made and the turf is home, so we have it all set up for a neighbour to just look in at the stock while we’re all gone to make sure everything is okay.

Another applicant who successfully made the cut to become a Rose Escort this year is Joe Butler from Inniskeen in Co. Monaghan.

The Teagasc Suckler and Drystock Adviser, farms around 45ac with a small herd of pedigree in Limousins imported from France and finishing close to 30 weanlings every year.

The 25-year-old decided to apply to become an Escort at the festival on the recommendation of two friends who had both been Rose Escorts last year.

“A good friend of mine, Niall Mooney, was an escort in 2015, and every night we went out together he never shut up talking about the festival and about how good it was.

“A fella I play hurling with, Ciaran McKinley, was an escort last year as well, he backed up what Mooney had said, so I thought both of them can’t be wrong,” Butler said. 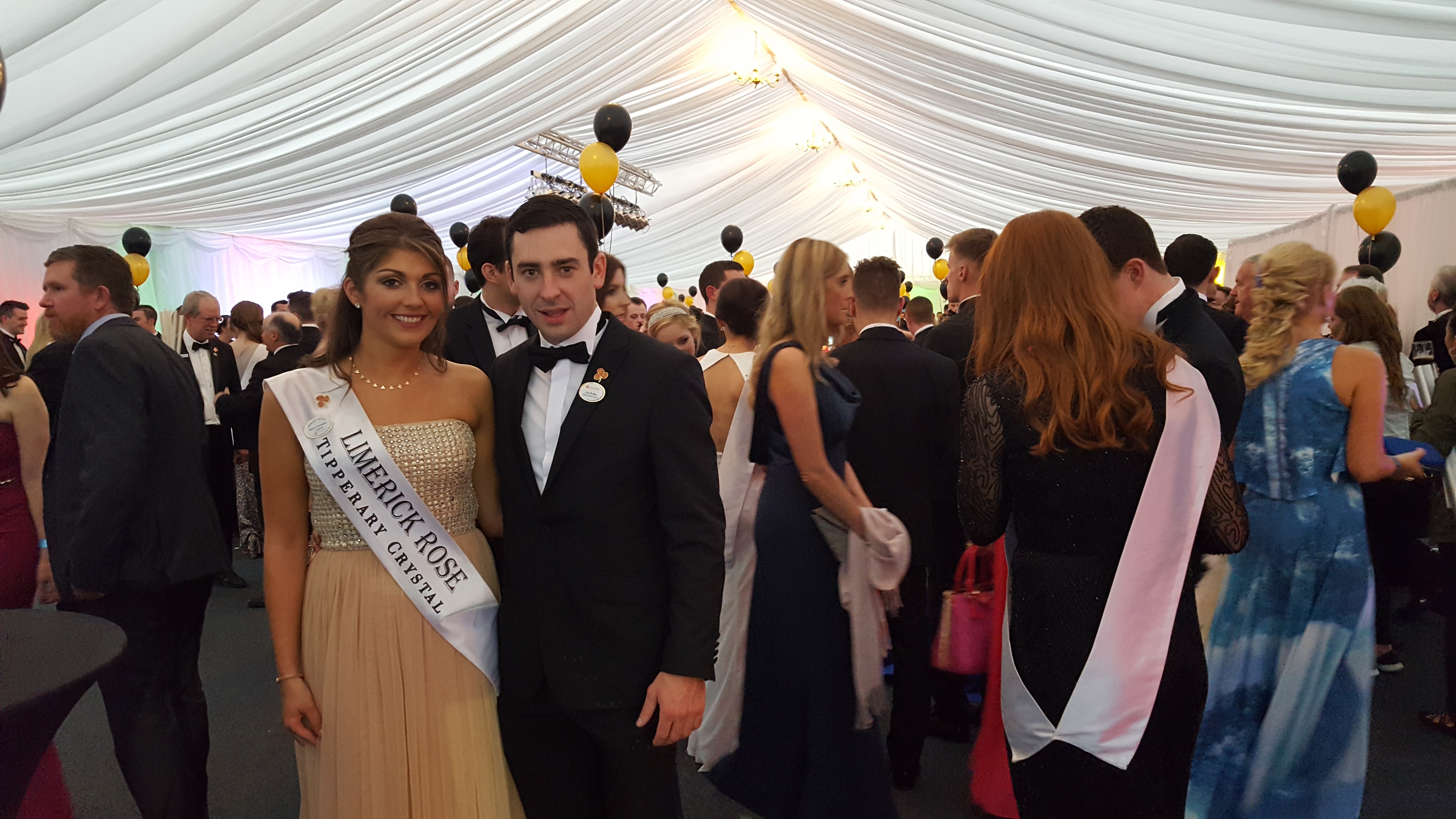 Joe Butler with the Limerick Rose

Butler applied along with two friends to become a Rose Escort, but he never imagined all three of them would make it through to the festival.

We thought they were joking when they said the three of us were going to be escorts, we couldn’t believe it. But we’re just really looking forward to the whole experience.

“I’m hoping the craic will be good down in Tralee and that it will be an experience to remember. It would unreal to say that you could go travelling around the world and have a person who you could call into for a cup of tea and a chat in so many different countries,” Butler said.

Butler takes care of the farm as his two brothers and father are busy with the family haulage business, but his father will ‘keep the ship steady’ while he’s down in Tralee.

The Monaghan man has been receiving well wishes from both his work colleagues and neighbours in the run up to the festival.

“I can’t believe how quickly the news spread, local people would be coming up to you after GAA matches wishing you the best and congratulating you, while people in Teagasc haven’t stopped talking about it for two weeks.”

The Rose of Tralee International Festival concludes tonight, August 23, where the 2016 Rose will be crowned.

'We need to get trained young professional people involved in farming'