Being married to the farm and never learning to milk cows 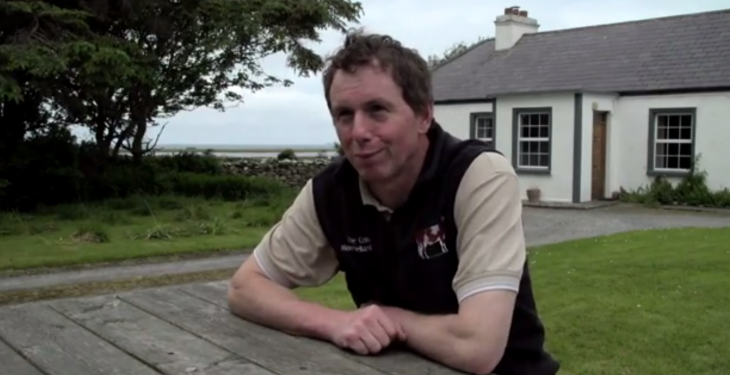 Richard Austin at home in Mayo.

Richard Austin admits that he’s married to his farm, and his wife Lorena admits she has never learnt to milk cows. Yet, farming in Co Mayo they both say there is no better environment to bring up their children.

Richard and his wife feature in a Teagasc video which was produced to mark that 2014 is the FAO International Year of Family Farming. Originally from Co. Meath, in 1986, aged just 19, Richard took up the challenge of farming with his uncle in Mayo. He set off for the townland of Bunlahinch, 5 miles the western side of Louisburg.

He started farming at 19 with his uncle, milking 22-23 cows and says it was a little more easy going, they cows knew where to go! “It’s all very intense now.” He now has 65 Mountbelliarde cows, a breed originally from France, and says they have good production and sustain themselves very well. They produced 455kg of milk solids per cow last year Richard hopes they will beat that again this year. Some pedigree bulls are sold for breeding while more are fattened for bull beef. Replacement heifers are reared on the farm and hoggets are bought in for winter grazing. “It’s very hard to hold grass on this farm over the winter” says Richard. “The sea sprays just kill it”.

His Spanish wife and two children love the lifestyle of living on a dairy farm. Even though he describes his relationships with his farm as ‘being married’ to it, Lorena says she took his mother’s advice of ‘never learn how to milk cows’ literally, but she does work off farm. She says though that it’s not an easy life. “There are no weekends off and a good sunny days means he’s working all day, she says.  I can’t think of any better environment for kids.”

He also agrees that it’s great for family time, as the farm is the home, not just the house.

“My passion and drive is not to milk as many cows as I can, but do do as much as I can here. If one of my children want to take over the farm I would be delighted, but if you don’t have that interest you can’t force it.”