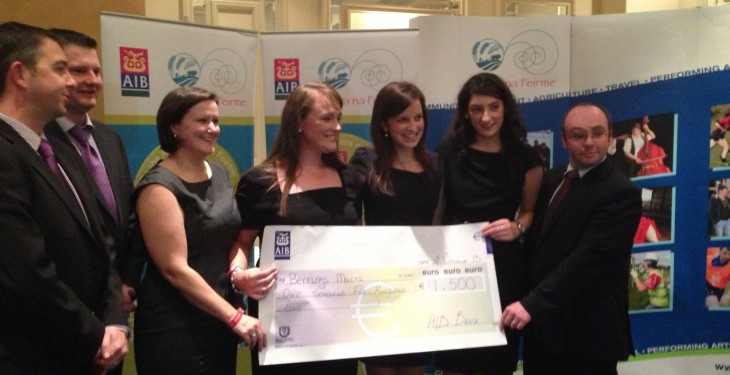 President Kieran O’Dowd praised the work and commitment of all Macra clubs throughout Ireland. Its sponsors AIB said Macra clubs were an important part of towns and villages throughout rural Ireland. “There are seven clubs in the final and that is only a fraction of the clubs out there. Don’t underestimate your work and contribution to your community.”

New Club Member of the Year went to 22-year-old Sinead Guiney of Freemount Macra, Avondhu, Cork. “I’m in total shock to be honest,” she blushed. “I think as a new member you try to become as active as possible. I tried to get involved as much as possible but I came from a really good club and I think that to be a good leader you also need a good team and I have a really good team behind me. I moved home after college and I saw Macra as a good social outlet. It’s a wonderful youth organisation for rural Ireland.”

Guiney is not from a farming background but that has not stopped her enthusiastic involvement in Macra. “I have learnt an awful lot about agriculture throughout the year. I’m not necessarily here to look for a farmer but whatever comes my way I suppose!” she joked.

Meanwhile AIB Club of the Year went to Beerings, Co Cork, who were overjoyed with the honour. Berrings Macra Club was established in 1957 and currently has 41 members. Berrings comes from a proud Macra lineage, with both parents and grandparents of the current crop claiming past membership of Macra.

“It’s about friendship, community and hard work. We are absolutely delighted,” said its treasurer.

Among the other winners were Runners-Up AIB Club of the Year Glanmire Macra, Cork and Treble R Macra, Dublin, New Club Estuary, Limerick. The AIB Club of the Year competition is designed to award the most dynamic and active clubs in the country. Macra President O’Dowd paid tribute to all members for their hard work and community contribution.

“Enjoy the rest of the weekend and be sensible,” he told the crowd. “There are 75 people taking part in the stockjudging  on Sunday and we want people to be on top of their game.” And with that the room broke out in applause and laughter.