‘Lungworm one of the most important respiratory diseases’ 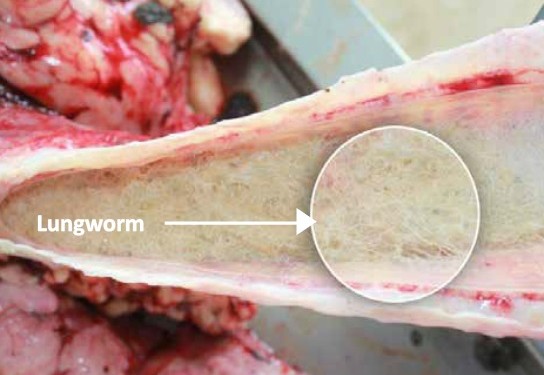 Lungworm infection or hoose is one of the most important respiratory diseases of cattle in Ireland, Animal Health Ireland (AHI) says.

According AHI, clinical disease is most commonly seen in first season grazing calves but can also be seen in older cattle who have failed to develop or maintain immunity.

Adult cows may also have a severe drop in milk yield and this can be observed before respiratory signs are observed, AHI says.

According to AHI diseases due to lungworm is most commonly seen in the second half of the grazing season, when large numbers of lungworm larvae have built up on pastures.

It is important to note that animals can acquire a dangerous level of infection even after only one day of grazing a contaminated pasture, AHI advises.

Close monitoring of all cattle at grass for respiratory disease, particularly coughing, is the best approach for detection of lungworm infection, AHI says.

Lungworm larvae may be found in faecal samples, but deaths from acute hoose can occur before larvae appear in dung warns AHI.

The three major groups of anthelmintics are all effective against lungworm.

According to AHI anthelmintics can be used strategically and in conjunction with a pasture management programme to prevent clinical disease due to lungworm or therapeutically in the face of an outbreak.

If coughing is detected in a group of cattle at grass and hoose is suspected, all cattle in the group should be dosed, AHI advises.

Cattle should be moved to a ‘clean’ pasture or an anthelmintic with persistent action may be used to prevent re infection, AHI says.