At the latest working European forecasting for sheepmeat, the general consensus points towards some further downward pressure on output as we move into 2014, which is expected to help prices.

Sheepmeat output in the EU-27 region is expected to contract by almost one per cent to 756,000 tonnes in 2013. This decline in production is being driven by lower output in France, Spain, Italy and Germany. However, higher supplies in both UK and Ireland are offsetting some of this decline.

Some further decrease in output is forecast for 2014, as ewe breeding flocks around some of the key European producing regions continue to show some decline while live exports to International markets have also increased strongly. For the first seven months of 2013, EU live sheep exports in carcase weight equivalent were some 62 per cent higher at 17,600 tonnes with Libya accounting for three quarters of total shipments.

By the end of 2013, the breeding ewe flock in the UK and France is expected to be four per cent and three per cent lower respectively. Lower prices in 2013 are expected to lead to some further reduction in the ewe breeding flock in 2014, most notably in France and Italy.

Despite lower EU-27 sheepmeat output in 2013, trade has been affected by increased New Zealand (NZ) shipments of lamb entering the EU. Shipments increased by 22 per cent to 55,000 tonnes for the first eight months of the year. NZ is expected to use more of their EU quota in 2013 (70 per cent used in 2012), with around 58 per cent of the quota used by 8 August.

Looking ahead to 2014, prices are expected to be helped by reduced output, a strong live trade and a forecast drop of seven per cent in New Zealand output in the year starting October 2013. 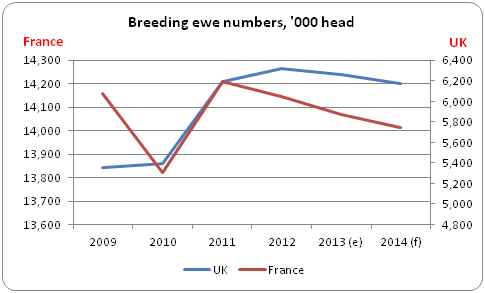