Everyone is waiting for the Minister for Agriculture, Food and the Marine, Michael Creed, to make an announcement regarding the promised fodder transport subsidy, particularly in the northern parts of the country.

This is the opinion of the Irish Cattle and Sheep Farmers’ Association’s (ICSA’s) Cavan county chairman Hugh Farrell.

Things have been busy for the ICSA in recent times – bringing fodder to places most in need of it. However, following last week’s announcement of the incoming subsidy, there has been a lull in transport in recent days – as everyone is waiting on details from Government, the Cavan chairman said.

People are unsure whether there will be €5 off a bale next week and are holding out until further details emerge, Farrell said. 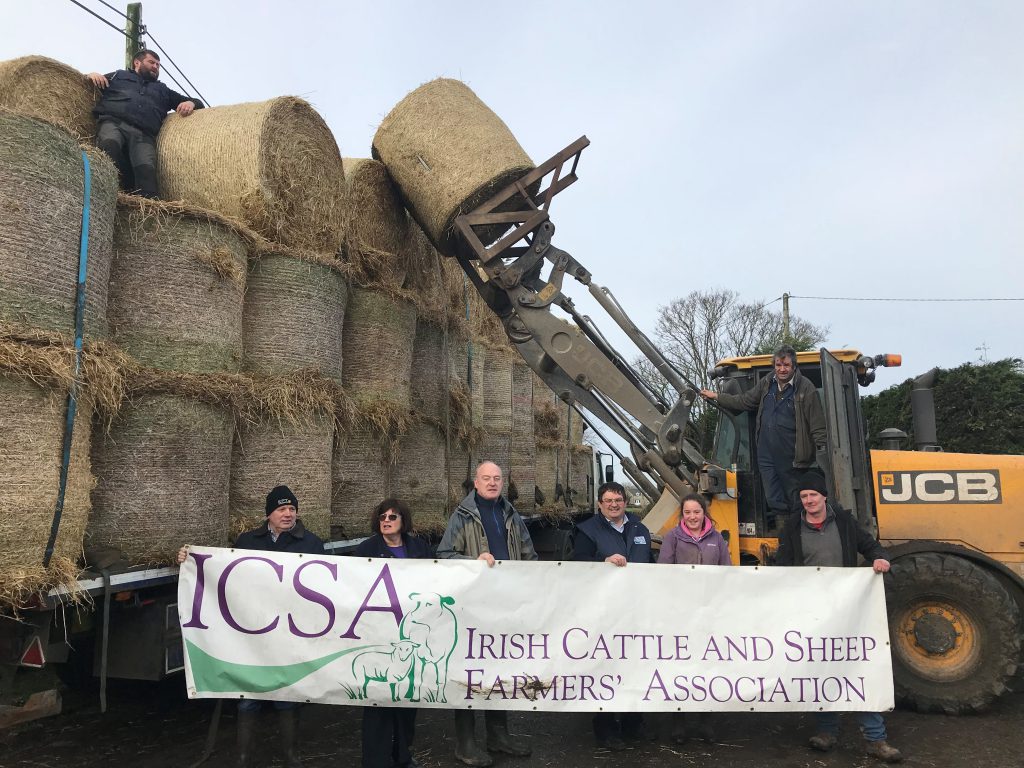 An ICSA delivery of fodder which recently went from the farm of Leeson Tracey, Ballyhackett, Tullow, Co. Carlow to farmers in Ballyconnell and surrounding areas in Co. Cavan

The ICSA has been keeping records of the loads of fodder being sent northwards, the Cavan chairman added, and will hand in receipts to the department when the subsidy comes forth.

Farrell noted that the problem is very much a regional issue, which is putting farmers in affected areas under severe pressure – with heavy transport expenses not directly spent on feeding the cattle.

People don’t know what they’re buying, Farrell said, and quality is varying – bales cost €35-€40 in some areas, so an announcement is needed soon.

The Cavan county chairman is hoping for an announcement from Minister Creed prior to the ICSA AGM this Thursday at the latest.

“It’d give more clarity to the situation; everyone is currently in limbo,” the Cavan chairman said. The current weather isn’t helping matters, he added. “The ground is saturated and unable to take any more water.”

“Some may have enough to do until February or mid-March – but, where do they go then?” he asked.

Things are not looking any better weather-wise either, he noted. “The land is saturated; you’d be up to your ankles in water on good land around here.

“Straw can’t be got, so what will lads use for bedding cattle? Everyone is getting this weather and, if it doesn’t change soon, the suckler herd will be wiped out.

In Co. Leitrim alone, 3,000 cows have gone through the marts in recent times.

There has been no extended run of dry weather since July of last year, the former ICSA president noted; barring a dry spell lasting two or three days last September, the last dry period for the north-west was on July 12, he explained.

Commenting on the soon-to-be-announced fodder transport subsidy, Gilmartin said: “It has to be welcomed; but, we’d like to see straw included in the scheme and a meal voucher system brought in.

Gilmartin added that it costs €500 to €600 to bring fodder up from the south of the country; for the same money, farmers could buy 2t of meal.

Top-range feed ration costs well over €300/t, while stretcher ration costs €220-€250/t; given the price and variability of drawing bales, in some cases meal has to be better value, the Sligo farmer said.

“I attended the recent fodder forum and was pushing hard for a meal voucher system to be introduced for those who badly need it. It would be aimed at those most in need, not given out willy-nilly.”

Merchants and planners could be consulted by the department to decide which farmers need vouchers most, Gilmartin said – adding that even the ICSA or other organisations would have a fair idea of who is most affected.

While the subsidy will be most welcome, a meal voucher system has to be targeted, Gilmartin concluded.