The sheep trade showed little change from the previous week with demand remaining steady and a slight decrease in supply according to Bord Bia.

It also notes that the trade across our key export markets remains slow.

Average lamb prices eased with base quotes for Spring lamb generally making between €4.50 and €4.70/kg. Prices paid for cull ewes are continuing to remain steady making between €2.30 and €2.60/kg.

Supplies for the week ending July 12th stood at around 58,500 head, which is around 2,000 head or 4% lower than the corresponding week in 2013. Cumulative supplies are around 1% higher than 2013 figures standing at around 1.25 million head.

Bord Bia says in Britain trade has shown a further decline on the back of slow demand. The SQQ live price for new season lambs in England and Wales was making the equivalent of around €5.21/kg dw during the week.

In France, the trade showed few changes from the previous week with prices remaining relatively steady as a result of the good weather. The Irish Grade 1 Spring lamb price was making around €5.25/kg (inclusive of VAT) during the week. 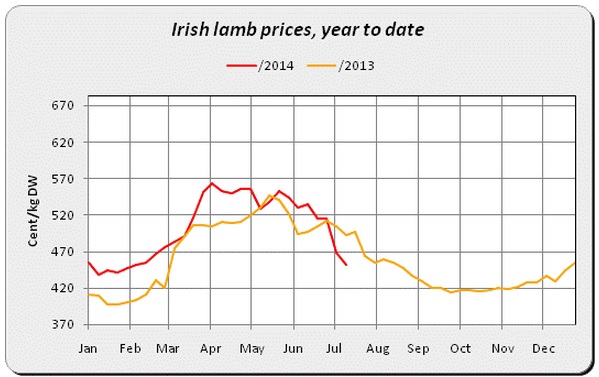