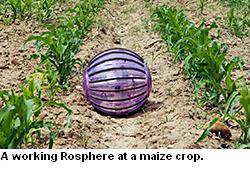 The hamster ball. Great for exercising hamsters, bringing stress levels down in humans and, according to Spanish scientists in Journal Industrial Robot, the future of farming.

Robotics and Cybernetics Research Group from the Universidad Politecnica de Madrid has devised a robot that can effectively check moisture levels of farm soil.

Its Rosphere mimics the way hamsters move their weight to get their exercise balls moving.

“A robot without wheels or legs that has a single spherical form that, literally, scrolls by itself to conduct the missions [while] being inherently stable,” they wrote in the journal Industrial Robot.

The researchers say the Rosphere is suited to rolling between rows of crops and will allow farmers to monitor environmental changes across large areas.

They believe it will eventually help farmers determine when to feed and water their crops.

Its research is available here.