Lamb supplies jump 10% in the space of a week

Lamb throughput numbers continue to climb as supplies have jumped by almost 10% in the space of a week, recent figures from Bord Bia show.

According to Bord Bia, just over 46,600 lambs were slaughtered in approved sheepmeat plants during the week ending October 1.

However, the continued rise in lamb supplies combined with weaker demand on the French market and strong supplies of UK lamb has seen Irish lamb quotes fall by 10c/kg this week.

Most factories are now operating off a base price of 450c/kg, down from the 460c/kg widely on offer last week.

Meanwhile, figures from Bord Bia also show that the number of cast ewe and ram slaughterings has also increased, with slaughter numbers up 2.1% or 259 head on the week before. 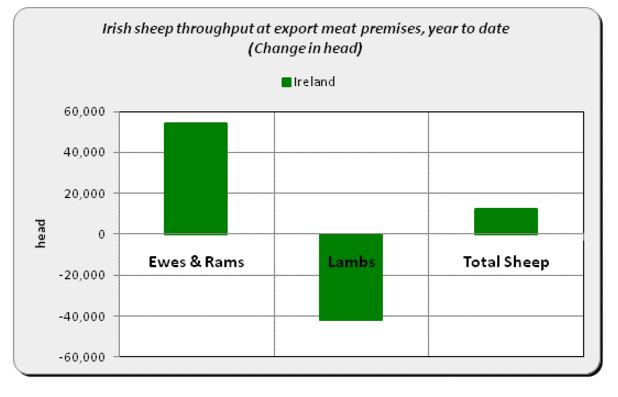 But, despite the slight increase in ewe and ram slaughterings, the cast ewe price offered by factories has remained largely unchanged, with most plants offering 230-240c/kg for well-fleshed ewes.

Following the jump in lamb and cast ewe and ram slaughterings, figures from Bord Bia also show that the weekly sheep kill also increased last week, with total throughput increasing by 4,368 head or 8% on the week before.

However, despite the week-on-week sheep kill increase, the cumulative sheep kill for 2016 is only running 0.6% or 12,385 head above last year’s levels.

According to Bord Bia, just over 1.94m sheep have been slaughtered in Department of Agriculture approved plants so far this year.

An increase in ewe and ram throughput can be widely accredited for this rise in throughput, with supplies up by 53,933 head or 24.2%.

But, this increase is counteracted by a fall in lamb slaughterings, with throughput back by 2.4% or 41,548 head on last year.