On a number of dates between July 30, 2015, and April 15, 2016, water quality inspectors acting on behalf of the Northern Ireland Environment Agency (NIEA) examined an inspection chamber at the LacPatrick anaerobic digester site at Cloyfin Road, Coleraine.

The inspectors discovered grey fungus in the chamber and an odour of silage was detected from the water.

In accordance with procedures, a statutory sample was collected from this chamber. The inspector added green tracing dye to the inspection chamber; the dye was subsequently observed in the waterway.

On November 3, 2015, inspectors revisited the site, noted the smell of silage and collected a sample of the discharge.

The inspectors met with the chief executive who explained there had been changes to the legal name and ownership of the then Ballyrashane Co-Op Company and its assets to LacPatrick, following a recent merger with Town of Monaghan Co-Operative and Dairy Society Ltd.

During another visit on January 26, 2016, inspectors observed grey fungus in a channel at the bottom of the chamber.

An odour of silage effluent was detected from this chamber. A statutory sample was collected. Inspectors examined a storm grating where green tracing dye was added.

The inspectors left the site and examined the waterway where they discovered “extensive grey fungus” and sludge worms.

Green tracing dye was observed actively discharging into the waterway, proving continuity between the storm grating and the digester tank.

On April 15, 2016, the inspectors collected a statutory sample from the inspection chamber as the inspector suspected the discharge from the chamber constituted an offence under the Water (NI) Order 1999.

The samples taken during this investigation confirmed that the discharges contained poisonous, noxious or polluting matter which was potentially harmful to fish life.

This ongoing pollution was the result of defective silage storage structures on site at the LacPatrick AD site.

A spokesman for LacPatrick said the firm is “fully committed” to environmental best practises and water quality standards.

“At the Ballyrashane site, LacPatrick has made huge efforts in addressing any shortfalls. LacPatrick is committed to and has planned capital investment into rebuilding or refurbishing existing silage clamps,” he said.

“We hired a hydrologist to carry out an investigation into the flooding and contamination of the site’s surface water and we have also ramped up our audit schedules.” 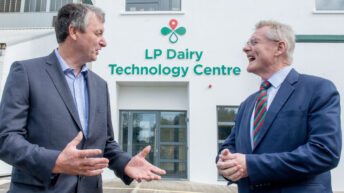