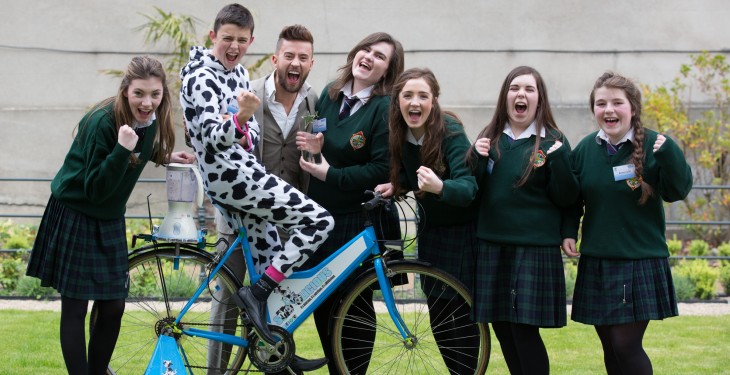 The winning team in Dublin.

Twenty teams of secondary school students from 10 counties were short-listed in a national cross-curricular competition, competed on stage for the national finals. The national finals were held as part of National Dairy Week.

Students from 1st – 6th year were challenged to set up their own ‘advertising agency’ with up to six team members and to create a ‘Milk It’ campaign based on a brief and guidelines. The team-based, national initiative has cross-curricular applications for teachers and students.

A total of 1,554 secondary school students in 358 teams from 26 counties initially registered for the 2014 NDC Milk It Awards.

The twenty teams (10 Junior and 10 Senior) who won a place to compete at the national finals, exhibited their project work and took part in a live ‘pitch’ on stage to a panel of judges, including Richard Curran, (Business journalist, author & broadcaster, including Dragons’ Den); Barry Dooley, Chief Executive, Association of Advertisers in Ireland; Paula Mee (Independent dietitian); and Amanda McCloat, Head of Home Economics at St. Angela’s NUIG Sligo.