Some €250/ha will be available to tillage farmers to grow protein crops, according to the Minister for Agriculture, Food and the Marine, Simon Coveney.

Announcing his decisions on the detail of the Coupled Aid Schemes for Protein Crops and on other aspects of the CAP greening measures, he said that as part of the Agreement on CAP Reform reached during the Irish Presidency, Member States were entitled to use part of their National Ceiling to introduce a coupled aid for protein crops to counteract the huge dependence in the EU on imported protein for use in animal feeds. This is also the case in Ireland.

The Minister already announced that he would be implementing a coupled protein scheme in Ireland. “I am now pleased to confirm that, with effect from 2015, I have set aside €3 million of the National Ceiling for the Coupled Aid. The rate of payment will be €250 per hectare provided the ceiling of €3 million is not exceeded in any scheme-year. The protein crops eligible for aid will peas, beans and sweet lupins”

Referring to the importance of protein crops are a break crop in the context of crop rotation, the Minister said “there is now an incentive for the industry and all relevant stakeholders to grow this sector by developing crop varieties that are best suited for Irish conditions coupled with more stable market outlets”. He added “that a consistent supply of protein, grown in Ireland, would potentially give Irish livestock farmers the opportunity to use more natively produced protein feed and to market their produce in higher value markets.”

In addition, the EU Regulations give Member States the option to select from a listing of areas and features that will be deemed eligible as an Ecological Focus Area (EFA). In selecting those potentially eligible areas and features, which he had decided to implement in Ireland, the Minister said that he “wanted to ensure that features selected where the most beneficial to Irish farmers in meeting their EFA requirement and can also be effectively monitored and control in order to ensure that timely payments could issue to tillage farmers.
[tab id=1]

In the case of farmers, whose holdings include more than 15 hectares of arable land, at least 5% of that arable land must be set-aside as Ecological Focus Areas.  The EU Regulations give Member States the option to select from a listing of areas and features that will be deemed eligible as an EFA area.

The areas, which will be implemented in Ireland, are summarised in the following table; 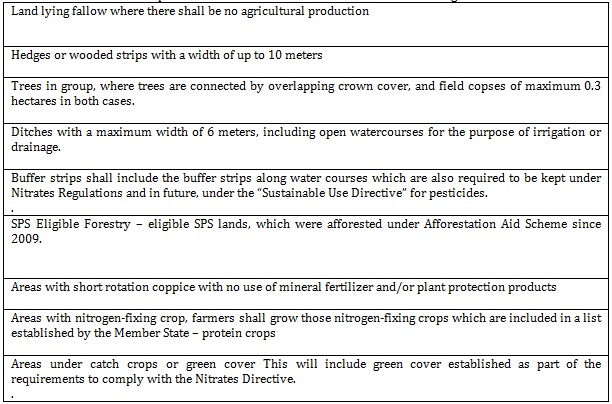 Finally, the Minister has decided to implement the conversion and weighting factors provided for in the Regulations. The Regulations provide for the use of a matrix where reflects the environmental value of each element qualifying for EFA – e.g. 1 linear meter of a hedgerow is equal to 10 meters2. The use the conversion and weighting factors will greatly assist arable farmers in meeting the EFA requirement – particularly in relation to hedges and drains.

Under the CAP Reform Agreement, the requirements relating to Crop Diversification are summarised in the following table.

In order to assist arable farmers to meet the Crop Diversification requirement, the Minister has decided to introduce equivalent practices as provided for in the EU Regulations. Those arable farmers, who are participants in the GLAS Scheme and who undertake to plant winter cover on their tillage lands will be deemed to have met their Crop-Diversification requirement by carrying out an equivalent measure under an Agri-Environment Scheme. This means that some farmers, who are currently growing one crop – e.g. some malting barley growers – can continue to do if they carry out the equivalent measure under GLAS. There will, however, be a need to make an adjustment to their GLAS payment to ensure that there is no double funding under both Schemes.