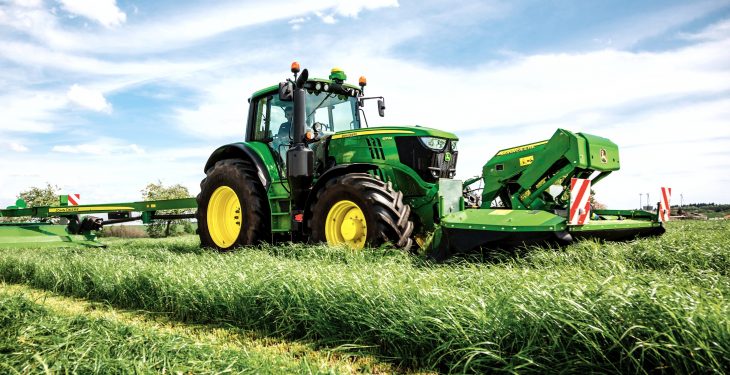 John Deere, along with New Holland, topped the market in 2016.

A total of 1,937 new tractors were licensed in the Republic of Ireland in 2016, according to figures released by the Central Statistics Offcice (CSO).

This figure represents a slight fall compared with 2015, when 1,986 new units were licensed.

This market performance will provide some reassurance for the machinery trade, considering the myriad of challenges it faced during 2016.

It had been feared that weak commodity prices, fluctuating exchange rates and wider political uncertainty would depress the market, particularly later on in the year.

The CSO notes that licensing differs from registration in that a vehicle is licensed when a valid motor tax disc is issued for the first time.

Registration occurs when a vehicle gets its licence plate (registration number) for the first time, it said.

The CSO figures also reveal brand-by-brand breakdowns for 2016. John Deere (377 units) and New Holland (376 units) were neck-and-neck, in a battle for the top spot.

Massey Ferguson (361 units) was close behind in third place. Some 144 new Claas tractors were licensed.

The CSO also published figures detailing the numbers of used tractors imported into the Republic of Ireland during 2016.

New Holland (710 units) was way out in front, followed by Massey Ferguson (291 units) in a distant second place. Some 197 used John Deere tractors were imported during 2016.

This means that over 1,000 New Holland tractors, counting new and used units, were transported and licensed into the Republic of Ireland during 2016. It is believed that many of the used, second-hand units were imported from Northern Ireland and England.

Meanwhile, licensing of other vehicles in Ireland are showing an upward trajectory, suggesting increased confidence in many quarters.